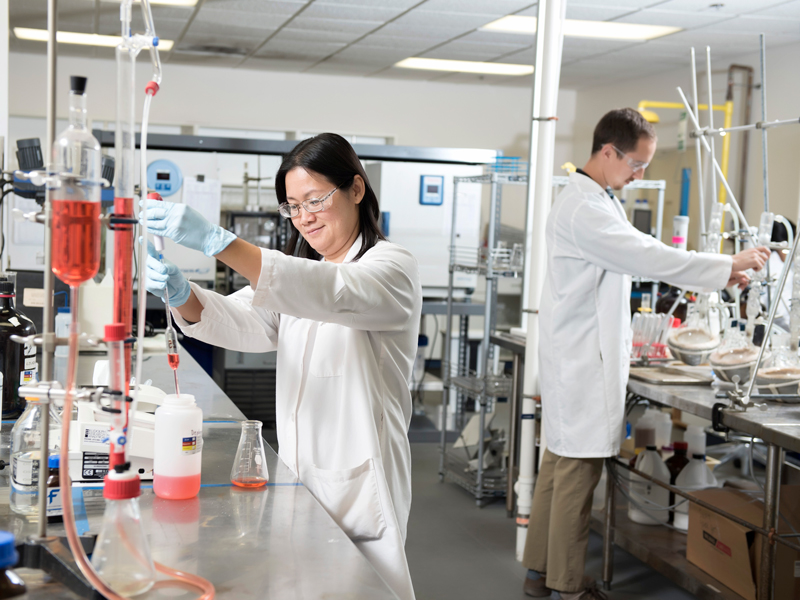 When you open your refrigerator, there’s a very good chance that every food product you see in it has been tested by a company you may have never heard of — Eurofins.

Eurofins Scientific Inc., one of Europe’s fastest-growing companies, has based its North American headquarters in Des Moines since 2006, when it moved its U.S. food testing laboratory operations from Memphis, Tenn. The company has had a presence in Iowa since 2000, when it acquired Woodson-Tenent Laboratories Inc., which had operated a lab in Des Moines since 1955.

The Des Moines operation is the U.S. hub of an international life sciences company that operates more than 400 laboratories in 42 countries, with a worldwide staff of more than 30,000 people.

Food safety often makes headlines when there’s a product recall or an outbreak of a foodborne illness; Eurofins is one of the food industry’s first lines of defense aimed at keeping the food supply safe.

Over the past 12 years, Eurofins’ Des Moines headquarters and labs have grown from about 75 employees to nearly 250 working in four divisions: Microbiology, Chemistry, Grain Inspection and Food Safety Services. Eurofins’ customers range from local food retailers to animal feed mills of all sizes as well as pet food manufacturers and processors of well-known brands of consumer foods.

“We like to think that we’re very solution-focused on all things for food safety and quality for the food industry,” said Gary Smith, director of Food Safety Systems in Des Moines. “There are a lot of businesses in the food industry that focus on one of these four areas, but very few actually do them all.”

Food safety represents a significant public health concern. The U.S. Centers for Disease Control and Prevention estimate that foodborne pathogens cause 48 million Americans, or 1 in 6, to become sick annually, with the most severe cases resulting in about 128,000 hospitalizations and 3,000 deaths.

Under the new rules, processors of food for both human and animal consumption for the first time must develop food safety management plans, which has driven double-digit growth in the education and training services provided by Eurofins, Smith said. “A lot of our customers here in Des Moines are animal feed producers, so they’re needing a lot of education, a lot of guidance on how to comply with that rule,” he said.

As one of Eurofins’ training hubs, its location in Des Moines provides Iowa-based food processors with tremendous access to the latest training and industry updates, Smith said. “We bring a lot of those innovative activities here first, and we give them first exposure.”
Eurofins’ laboratory services have also expanded significantly in Iowa, said Anders Thomsen, who leads the Chemistry business unit that tests foods for contaminants and authenticity. That unit’s laboratory staff has increased by about 100 people over the past 12 years to approximately 175 currently. Both the Chemistry unit and the 24-person Microbiology unit operate around the clock, seven days a week.

Technology advancements are speeding up the testing processes significantly, Smith said.
“Microbiology testing in general is very time-sensitive,” he said. “Previously, the old-fashioned cultural methods were very time-intensive and labor-intensive. There’s been a lot of innovation around speed and advancement in rapid methods. Tests that used to take five or six days to conduct, we’re now doing in 24 to 48 hours.”

Increased automation and investments in high-end testing equipment are also paying off in improved levels of quality, Thomsen said. “We are investing a lot in lean technology, in automation, while increasing quality at the same time,” he said.

To increase its laboratory space, the company has plans to move its headquarters offices to a separate location in Greater Des Moines so that it can convert its entire 60,000-square-foot facility in Des Moines into laboratories.

“We have very aggressive growth plans and want to focus on providing solutions to the food industry and our food customers,” Smith said. “So I would say our growth is going to be solutions-focused, with technology, with innovation, with equipment to be able to meet those needs of our customers going forward.

“We’re here to stay; we’re not going anywhere, and we’re going to get bigger.”