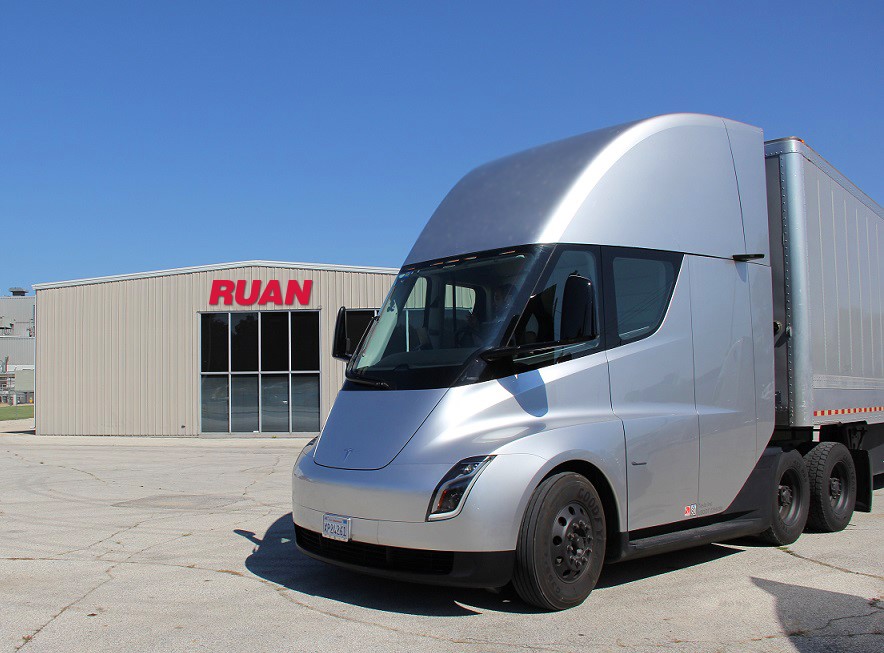 Representatives from Tesla Motors visited with team members of Ruan Transportation Management Systems and several Ruan customers in Des Moines this week for a preview of Tesla’s electric-powered tractor-trailer. Ruan in January reserved five of the new semis for delivery and testing next year.

Prototypes of the semi have been traveling the country, making stops with key companies that have invested in the all-electric semis expected to be released in 2019. During the voyage, the trucks have been charged using Tesla’s existing network of Supercharger stations. Tesla expects a 300- or 500-mile range for the trucks, varying by model.

According to a release from Ruan, the 100 percent electric, battery-powered trucks boast impressive features that could allow them to outperform diesel-powered or hybrid models currently available. Among them are improved aerodynamics, a zero-to-60 MPH speed of five seconds without load, and a 500-mile range per charge. According to Musk, a 400-mile range will be attainable with just a 30-minute charge from one of Tesla’s planned Megacharger stations.

“We are excited to have an opportunity to experience the new electric semis,”  said James Cade, vice president of Ruan fleet services. “The reservation of these vehicles is part of Ruan’s sustainability efforts and commitment to providing our customers and professional drivers with the best technology available.”

Cade said that Ruan will continue to be involved with the team at Tesla Motors as they introduce the trucks to the market. “We will work with them directly to ensure the vehicles will serve us and our customers to the level we both expect.”