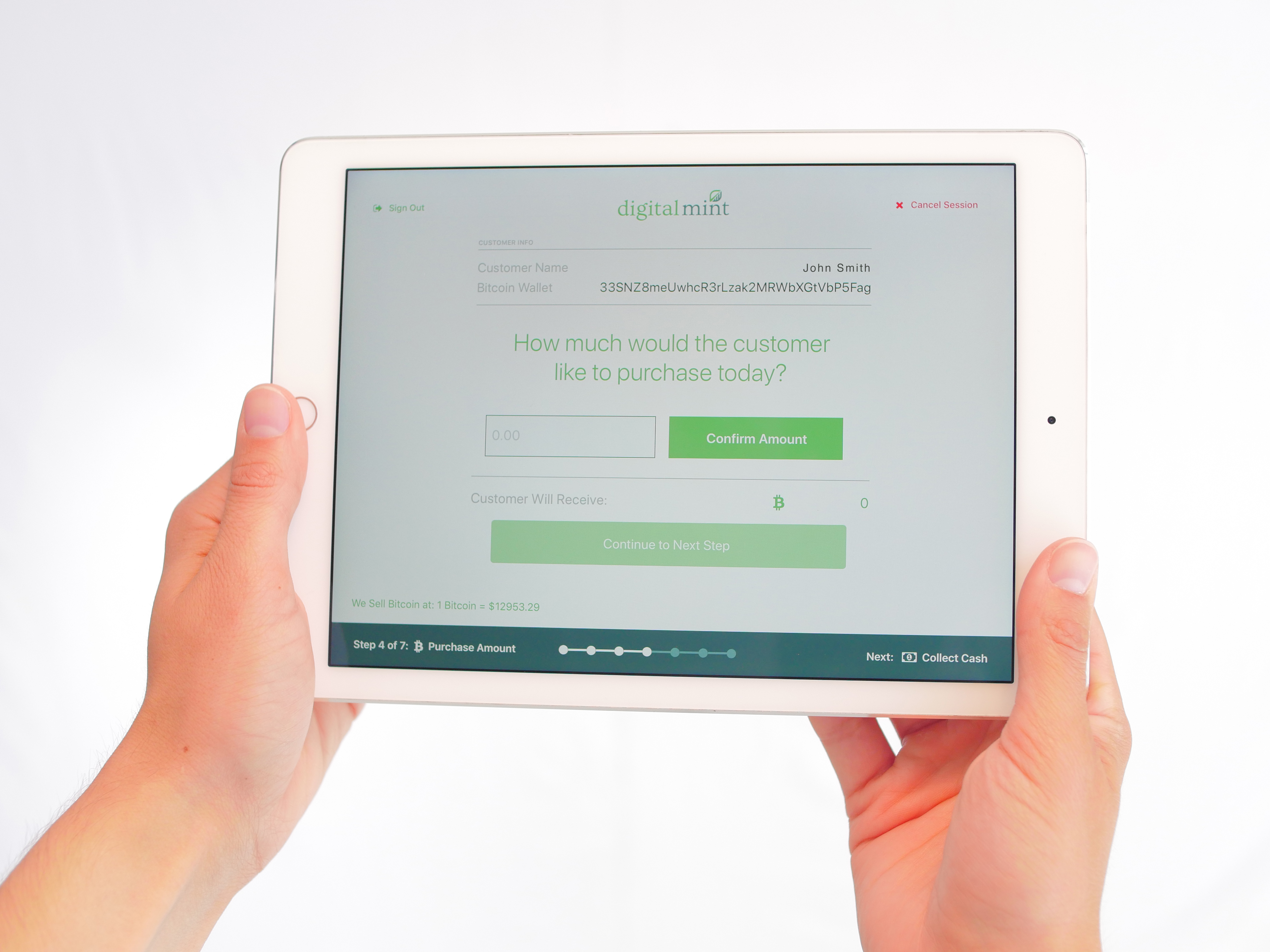 Q&A with DigitalMint’s founder: Iowa tellers and other plans

Cryptocurrency’s domain starts and ends with online transactions — but Chicago-based DigitalMint is bringing Bitcoin to the real world with the launch of 17 Bitcoin teller windows across Iowa, joining more than 200 other teller and ATM locations in 19 states, we learned earlier this month.

DigitalMint co-founder and President Marc Grens told innovationIOWA what consumers can expect when they see a Bitcoin teller window.

Q: Tell us about your launch plans.

A: We launched two weeks ago. We had a partnership with EZ Money. They are a money services business that’s based in, I think, five states. When we launched with them nine months ago in Nebraska, Missouri, North Dakota and Iowa, we were … collaborating with the department of financial regulations in Iowa. We have pretty strict compliance, so before we launch in any state we get approval from the state in terms of whether they want us to get specific licensing, or we … just get their approval for us to operate. So it took longer than expected, but finally they came along and said we’re allowed to operate.

[Editor’s note Nov. 1: The Iowa Division of Banking determined selling Bitcoins directly to consumers would not qualify as money transmission for DigitalMint.]

Q: Bitcoin is inherently digitally based. Tell us about how this teller model operates in the real world.

A:  What makes Bitcoin extremely powerful, and why sellers of a product or service want to receive Bitcoin as a digital payment, is because it’s one of the only payment systems … that’s irreversible. So once I get paid in Bitcoin, I don’t have to worry about fraud or chargeback that’s associated with all other payments, from ACH [automated clearing house] to credit and debit, and any other bank mechanism to transfer funds. Everything else has a reversibility element. If I’m selling a product or service, I’m going to incentivize somebody to pay me in Bitcoin because I don’t have to worry, I don’t have to trust them.

… You can buy it either on a website like Coinbase, Gemini or Kraken, and you can hook up your bank account. The problem with that is if you hook up your bank account to one of these online exchanges to buy Bitcoins, they don’t know who you are. You can say you are somebody. So they have a lot of risks to be concerned about — so if you buy, they don’t allow you to withdraw the coin for a certain amount of time, and that could be weeks, and they put limitations on it because they don’t want to add risk. So if you want to buy Bitcoin and you want to send it to somebody and have it be an irreversible payment … cash is the best way to do that, because Bitcoin acts as digital cash.

Q: How much Bitcoin can people purchase?

A: Bitcoin is hard-coded to allow for eight decimal points past one full Bitcoin. You can buy 100 millionth of a unit and then send that 100 millionth unit of a Bitcoin.

You take the exchange rate today [Oct. 19], about $6,500, and you times that by one 100 million, it’s smaller than a fraction of a fraction of a penny. It is large enough to sustain a global economy, and it’s small enough to where somebody can buy a dollar’s worth of Bitcoin. At our teller locations, if somebody comes with a dollar, they can transact and they can own a dollar’s worth of Bitcoin.

Q: How long has DigitalMint been around?

A: Myself and [co-founder/CEO] Jonathan Solomon, we started the company in 2014. We bought a few Bitcoin ATMs to learn about the business. … It was a side project. I was working at a tech company in commercial real estate analytics as an executive, Jon was at Coinbase, and we bought a few ATMs and put them in a few places in Chicago. We really started learning about who the customers [are], and saw a vision of how big this can be. So in early 2015 we both decided to quit our jobs and put some of our own money and support into running this company.

Q: Who are the customers who typically go to a Bitcoin teller, versus an ATM?

A: When we started this company we thought … the underbanked market were the only ones [who’d want this]. What we find out is that more and more coming to us want to buy and own Bitcoin — anybody who wants to improve their financial life. So the answer is everyone, from all walks of life, all ethnicities, classes, occupations.

The two strongest use cases are No. 1, the underbanked market, that’s 22 percent of the United States. Those are the ones using Bitcoin like a MoneyGram, Western Union, a prepaid debit card, or a business tool and a store of value. It has a lot of the same properties. … If somebody wanted to buy something online but doesn’t have a bank account, they can’t use Venmo or they can’t use PayPal, they have to load up on prepaid debit cards.

Then also, we have speculators, those that just want to own it and hold on to some of it because they think this is continuing to be the next payment system and they want to have a piece of it. … We don’t believe this can replace currencies; we think this is just augmenting the financial system to make it faster, more seamless.

Q: Do you have any expansion plans?

A: By the end of 2019, you know, barring state approvals, we expect to be in every state in the United States. … We’re going to be adding other cryptocurrencies through some of our platforms.

Right now there’s well over 1,000 different cryptocurrencies. We believe most of them don’t provide much utility or value, but there are still a handful of them that do provide a unique value, so we’re going to start supporting that in 2019, likely in the first half of the year. Mostly Ethereum and Litecoin, and potentially Dash are some that we’re going to be looking at.