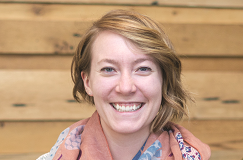 Vollstedt, who began at Successful Farming last week, was the first director at the Iowa AgriTech Accelerator. The accelerator launched the first cohort in 2017 and selects six international agtech startups a year to take part in the summer accelerator and present during the World Food Prize activities in October.

“We all wish Megan the best in her new role, and we think as part of the ecosystem for tech and agriculture, she’s just adding to it,” Colwell said. “We’re very fortunate to have Kerty step in immediately, and we feel like it is going to be business as usual.”

Levy will remain as interim director throughout the 2019 accelerator cohort and will be assisted by Charise Flynn, also an entrepreneur-in-residence for the accelerator and the former COO of Dwolla, Colwell said.

The board has received about 30 applications from startups for the 2019 cohort, and expects to select the final participants by the end of April, Colwell said.

The accelerator expects to begin advertising for the executive director position as soon as next week. Colwell said the board is hopeful to hire a new director who can join as Levy manages the 2019 cohort. Those interested in the position can also contact Colwell directly.