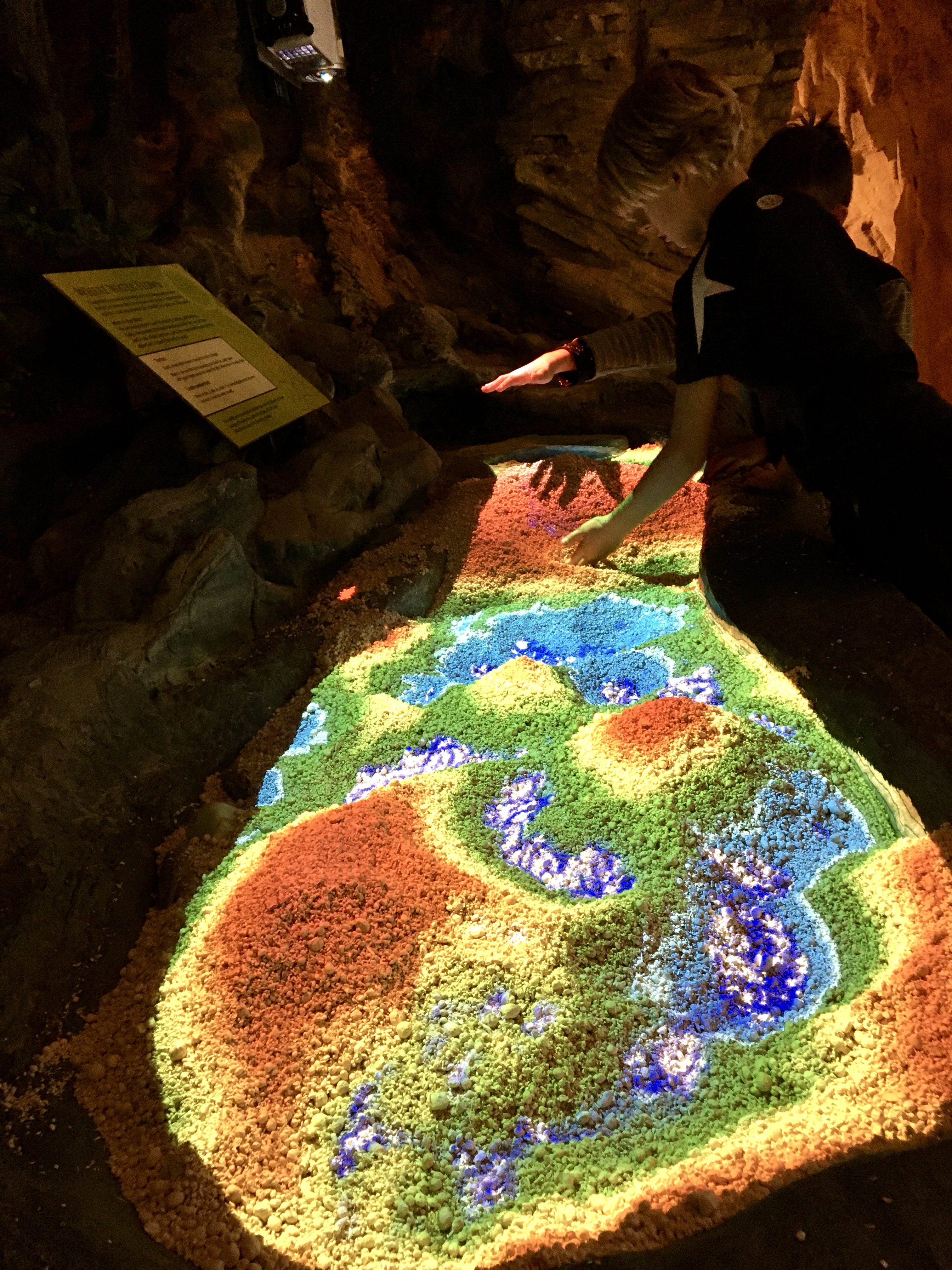 View video of the AR sandbox at work here: http://bit.ly/2BmgOdL

University of Iowa senior Cody Wilson stood on the second floor of the Science Center of Iowa. He held his palm flat above a bed of sand long enough for the rain to swell, then fall, creating deep divots among the gritty mountains.

Wilson isn’t exactly an “American Gods” type character; he’s an engineering student, and on Friday he and other UI students were debuting an augmented reality sandbox at the Science Center during $5 Family Night.

“If I spread my fingers out like this, we can create water and rain. So it’s moving down the different mountains and filling up into the lower spots,” Wilson said as he showed how augmented reality can be used to demonstrate the interaction between rainfall and topography.

Between the two hills of sand, a growing pool of deep blue started to splash.

“By creating a dam, I can kind of simulate what it would be like if a natural disaster would happen, if the ridge fell and how the water would [move] to the lower depths here,” he added.

It wasn’t long into the event before a pile of kids started creating their own rainstorms over the sandbox.

Tyler Bell, assistant professor in electrical and computer engineering, worked with the UI 3D Club to design a custom AR sandbox after the Science Center expressed interest in hosting a version on permanent display.

“We’ve taken the original AR sandbox idea and extended upon it a little bit to get this large field-of-view sandbox in this custom space,” Bell said.

The club merged two systems — each with a 3D scanner and projector — on the overhead mounting track to create a seamless simulation software beamed above the sandbox, which kids can interact with. Design began in April as students worked around classes, internships and the summer break.

“We had to design it such that it only existed in the riverbed that was here — if you were to look at it, the sand only lights up, or pops out, where there is sand. Everything else [on the display] is dark,” Bell said. “It really gives a life and a unique quality to the sandbox.”

It’s a new line of tinkering for the student organization, previously known as the UI 3D Printing Club. They will continue their 3D printing work to develop adaptable, custom prosthetics for amputees — currently the team is developing an arm/hand prosthetic to help a woman participate fully in her yoga practice. The team is also developing custom prosthetics for golfers through a Cedar Rapids veterans organization.

“Before, we were able to help individuals and really be able to shape their lives, but now we’re actually able to broaden that scope and help people on a much larger scale,” Wilson said.

The broader research focus allows the student organization to adapt quickly to outreach opportunities, especially those aimed at students K-12.

“They can be inspired by some of the projects that we’re doing and hopefully be able to become engineers, or become something that would allow them to help people like we’ve tried so hard to do,” he added.