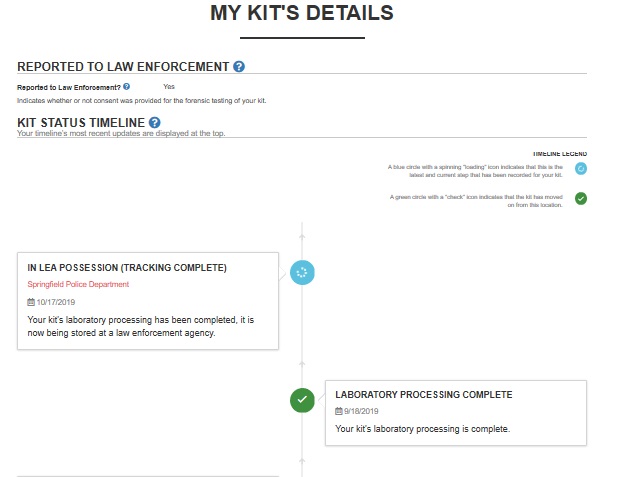 A screenshot of the STACS DNA Track-Kit portal for survivors of sexual assault. The data contained in this screenshot is example-only.

By July 2020, Iowa will be the seventh state to implement a new tracking system to prevent the misplacement or backlog of untested sexual assault kits across medical facilities and law enforcement.

The announcement comes as Attorney General Tom Miller’s office continues the Iowa Sexual Assault Kit Initiative, which was created in 2015 to address the backlog of at least 4,265 untested sexual assault kits in the state, some of which dated back to 1992.

As of Nov. 5 in Iowa, 1,245 of those discovered kits have been tested, the attorney general’s office reports.

The Track-Kit software is designed to follow kits from the moment forensic evidence is gathered in a kit until the case receives final disposition in a court of law, Miller said. Iowa’s Crime Victim Assistance Division received a $796,985 grant from the National Institute of Justice to implement such a system.

“This software will increase accountability and transparency throughout the process. Our office has worked hard to reduce the backlog in untested rape kits, and this system will empower survivors of sexual assault,” Miller said in a statement.

Track-Kit is expected to be live across the state by July 1, and STACS DNA will provide live webinar-based training to more than 1,200 users at medical facilities, laboratories, country attorney offices and other agencies before the rollout, President and Chief Operating Officer Jocelyn Tremblay told the Business Record.

After a sexual assault survivor consents to have forensic evidence collected by medical technicians in a sexual assault kit, a Track-Kit bar code is assigned to the kit and filed into a tracking system based in a government cloud (supported by either Microsoft or Amazon Web Services, depending on the state).

Founded in 2001, STACS DNA built its casework and lab management software for crime laboratories over time but saw law enforcement departments nationally struggling to track both where kits had been transferred to, and how long those kits had been in agency’s possession.

“What we’ve observed over the years is … it varied from one state to the other. Most states were not using tools per se, or [not] using integrated tools,” Tremblay said.

The Newark, Del.-based company began development of Track-Kit in 2014 and piloted the project in Michigan, before signing its first contract with Arizona in 2017.

Using a secure browser portal, sexual assault survivors will also be able to log in to Track-Kit to see status and location changes of their kit, or they may sign up to receive email or text alerts to status changes. Along with location changes, the Track-Kit bar code will monitor the number of days a sexual assault kit sits before law enforcement collects it. Track-Kit will also direct survivors to resources for recovery assistance, and will provide technical support to all users from 6 a.m. to 9 p.m. seven days a week.

“We’ve designed this to be quite intuitive,” Tremblay said. “Survivors who are interested in where the kit is located today are presented with a timeline in chronological order [of] what happened to that kit. I can see my kit was collected a week ago at medical facility A, [then] was picked up by law enforcement.”

Survivors who have a kit collected but choose not to consent to processing by law enforcement will still have access to the kit’s tracking, he said. Depending on each state’s guidelines, untested kits may stay in storage for limited amounts of time before state-mandated destruction or indefinitely; a 2017 Des Moines Register story reported by Kathy Bolten found that about 800 sexual assault kits sitting in storage were not tested because survivors did not want to press charges. A remaining 3,400 kits were untested for a range of reasons, including doubt about the accusation and prosecutors not requesting analysis.

In the case of a kit destruction, survivors and other end-users tracking the kit will see the date and location of destruction, Tremblay said.

That data will remain in the system. Track-Kit does not track individual items of evidence within a sexual assault kit or the survivor’s personal identifiable information, Tremblay said.

“It is not a chain of custody system, it does not replace the legal chain of custody,” he said. “We monitor the life cycle of the kit, but nothing beyond the kit bar code, who collected the [kit], and which officer picked it up.”