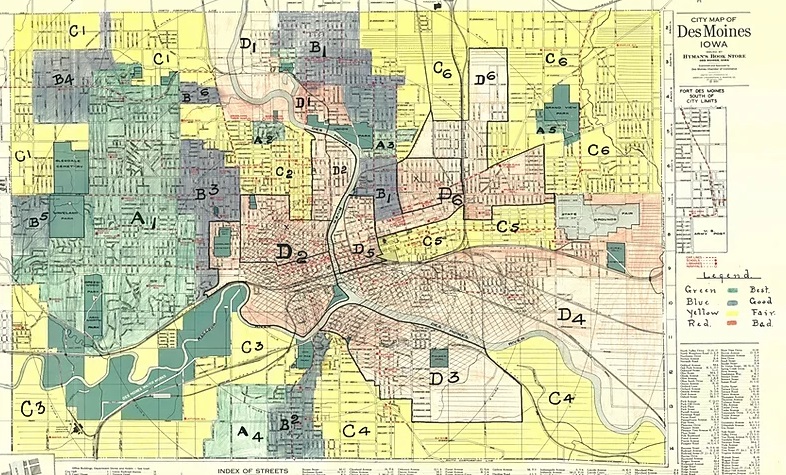 After rebuilding historic Des Moines from the data, Undesign: DSM jumps to virtual tours for the public

The original Des Moines Securities Map from the 1930s, on display at Undesign: DSM by Polk County Housing Trust Fund. A link to the map’s original descriptions is available here.

A red line runs through the old Franklin Junior High in Des Moines, highlighting what residents of the city couldn’t see for years. When the pandemic arrived in early 2020, the Polk County Housing Trust Fund wanted to ensure Polk County residents would still see that line today.

The Housing Trust Fund is extending its weekly public tours of the exhibit Undesign: DSM, which were intended to end in May, after a surge in interest on May 27 following Minneapolis resident George Floyd’s death in police custody.

Virtual attendees at the 1 p.m. tour doubled that day — from an average of 20 attendees a day through May, to 45 attendees on May 27. The Housing Trust Fund’s director of communications, Lauren Johnson, and director of research Kendyl Larson will continue hosting public tours through Facebook Live every Wednesday at 1 p.m. The exhibit will remain at Franklin Junior High until October, wrapping with the celebration of Affordable Housing Week Oct. 12-17.

“The opportunity to relay that information and educate the community is really important to us,” Johnson said. “We’ve been delivering this message since January and even since April 2019, and we think that now, more than ever, it’s really important to continue to educate the community on these systemic issues and continue the conversation as to how housing can be a solution to some of those more systemic inequities.”

“The most critical information that we were able to add to the presentation was the data that really guided us to the decision of bringing this exhibit to Des Moines,” Johnson said. “We’re very proud of that transition and the innovations here, and always available to help other nonprofit organizations brainstorm ideas to switch up their [programs].”

REDLINING: The practice of denying a creditworthy applicant a loan for housing in a certain neighborhood, even though the applicant may otherwise be eligible for a loan. Fair Housing Act of 1968

Undesign: DSM was developed from the Undesign the Redline initiative created by the social impact firm Designing the WE. The Polk County Housing Trust Fund brought the firm’s national pop-up tour of the exhibit to Des Moines in April 2019, and decided to expand the exhibit with local data for a long-term exhibit.

The team identified neighborhoods such as the historic Chautauqua Park neighborhood in Des Moines, which was one of several developments that placed racially restrictive covenants on homeowners to prioritize white families. The Housing Trust Fund also collected local stories of Des Moines’ Center Street, a region of mostly black-owned businesses, including well-known jazz and entertainment clubs.

“The reception to the virtual tours has been so encouraging, so we really plan to continue doing that on the appointment basis that we have been doing with different community groups,” Johnson said.