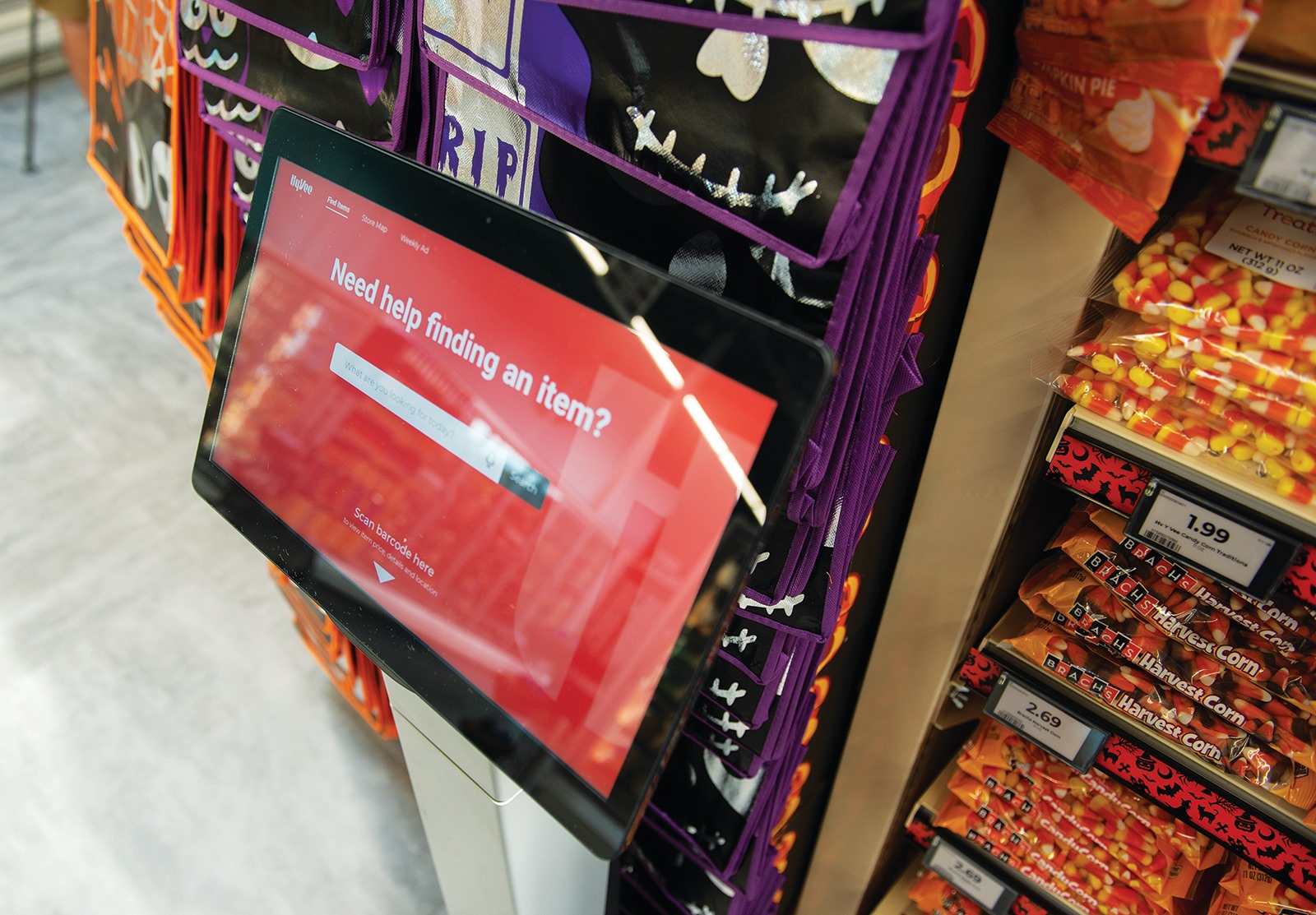 Walking into the new Hy-Vee in Grimes, there is a lot to absorb, and although they likely aren’t the first thing to attract shoppers’ attention, the “smart” features of the store are meant to change the experience of shopping and working at Hy-Vee.

The Business Record spoke with Hy-Vee officials about each of the new digital components.

The Scan and Go app is prominent addition, providing customers another new way to check out in addition to self-checkout lanes.

The checkout process all happens within the app as well. Scan and Go shoppers connect their payment method in the app beforehand so when they are ready to check out they go to the designated Scan and Go lanes pictured above, scan a QR code that generates the total and pay. A Hy-Vee employee will then verify that the order is accurate.

The app was developed just this year, with teams starting on it in late spring after “a few stops and starts,” Chief Technology Officer Luke Tingley said. Currently, Hy-Vee is using a third party to provide the framework for Scan and Go, but Tingley said there are solutions that could allow them to bring the app development in-house in the future.

Customers at the Urbandale and downtown locations were the first to try the app; some of the changes Hy-Vee made based on feedback were adding the option to connect Fuel Saver rewards and support features both in-app and in-store to point out functionality to users.

Assistant Vice President of Communications Christina Gayman said Scan and Go will provide customers more choice in how they check out, as well as a more contactless option.

“I think if you have a certain number of items [and] you don’t really want to wait in line, you’re in a big hurry, even more of a hurry than self-checkout … you can start scanning from the moment you walk in the store, and so it really cuts down on time for the customer,” she said.

Various digital kiosks throughout the 93,000-square-foot space will also be part of the store’s digital experience.

The prepared food department includes the new Food Hall and the Cake This Bakery, which both have options to order at a kiosk. Customers can order custom cakes at the bakery kiosk or choose one of Hy-Vee’s pre-selected designs.

Gayman said the kiosk will allow customers who know what they want to quickly order and for employees to focus on helping customers who want to ask questions before deciding.

The Food Hall works much the same as other fast-casual restaurants. Customers select what they want to order, take a number and an employee brings it out to them.

The kiosks are also provided by a third party and overlaid with Hy-Vee’s application and user interface. Development on them started early in 2021, and Tingley said teams “were down to the wire” to get them ready for the launch at Grimes. He said there are parts they will continue to refine following Tuesday’s launch.

“Hopefully nobody notices, there’s just a few little odd things we need to tweak,” he said. “Generally the kiosk works the way we want it to. This is still version one, so we’ll continue to refine and make those better and bring new functionality to it.”

Similar updates can be expected to the wayfinding kiosks. Like the ones used for ordering food, these kiosks are first launching in the Grimes store. When the new location is fully operational there will be about six spread throughout the space.

With the current functionality, customers can look up an item and see its nutritional facts and its location in the store on a map. Tingley said the location information will become more precise, specifying not only the aisle it’s in but the section and shelf as well.

QR codes are featured in some of the store’s non-grocery departments. The new DSW shoes section has a selection of footwear available for customers to try on, but there is also a separate wall featuring a smaller number of styles that may be higher-end or more expensive. By scanning the QR code, shoppers can browse on the DSW website and have their order shipped to their house or to Hy-Vee for pickup. This concept first launched at stores in Minnesota.

The Johnson Fitness showroom, which is debuting in the Grimes store, has options to continue shopping via a QR code or a kiosk. Gayman said the increase in the number of QR codes used throughout the store aligns with the improved accessibility of them.

“I feel like for so long, the QR code kind of went the way of the dinosaur, like you had to have a separate reader or a separate app,” Gayman said. “It wasn’t super intuitive, it was kind of clunky, [but] now everyone’s phone does it.”

More a time-saver for the employees, all of the more than 170,000 price tags are electronic, automating the task of frequently updating tags to reflect sales and reduced prices.

As all the smart features come together under one roof, Tingley said Hy-Vee will continue to take customer feedback as they “refine the experience” and let the product lineup evolve over time.

Hy-Vee will be watching how features perform at the Grimes location and considering opportunities to bring them to other Iowa stores. Tingley also said there is no shortage of projects the technology teams are working on.

“We’ve got a long list of things we want to get out as pilots to test [and] get out in our customers’ hands,” he said. “We’re definitely focusing on customer service and customer experience.”