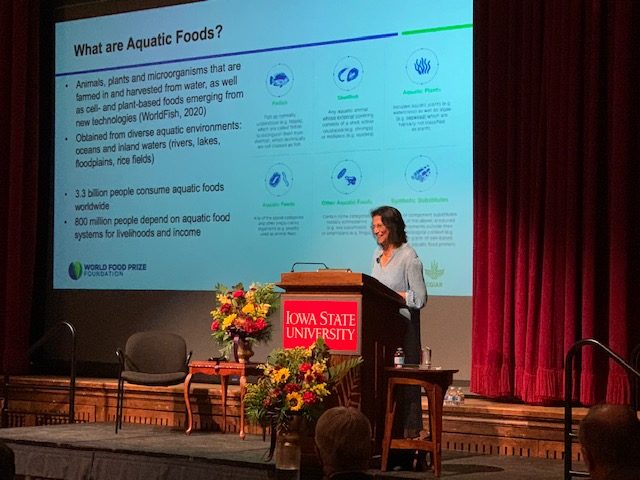 Like Iowan Norman Borlaug, the agronomist the lecture is named after, Thilsted’s research focused on serving countries in Asia, Africa, Latin America and the Caribbean, where up to 811 million people faced hunger in 2020.

Thilsted, who currently serves as the global lead for nutrition and public health at WorldFish, said an annual report on the state of food security and nutrition showed the COVID-19 pandemic is one of several factors that interrupted what had been years of progress, creating a more “dire” situation.

Women and children in the studied regions are also more at risk for food insecurity — Thilsted found its prevalence was 10% higher among women in 2020 and the growth of about 1 in 5 children was stunted.

To respond, Thilsted developed a nutrition-sensitive food systems approach throughout her research, which prioritizes people and their nutritional needs. She said this type of approach is also designed to affect food systems from multiple entry points — “not just production, but consumption, the supply chains, and also the policies and government structure that apply to food systems.”

In developing a nutrition-sensitive approach around aquatic foods, Thilsted found two narratives she wanted to change, the first being the way aquatic foods are thought of and valued.

Typically, aquatic foods are considered to be fish that come from the ocean or a marine setting and are valuable because of their high protein levels. But Thilsted said from her experience there is far more diversity in all these areas.

Aquatic foods, including plants and microorganisms, are sourced from rivers and lakes and offer vitamins, minerals and fatty acids that aid cognition, growth and development.

The different mindset on aquatic foods and their nutritional value feeds into the other fundamental change Thilsted wants to make: shifting the goal of food systems from feeding to nourishing.

“When you talk about feeding, the notion is about quantity and the energy value of foods, so there’s a lot of focus on the few staple foods that make up the diet,” Thilsted said. “If we would shift the narrative to nourishing, then we would also increase the quality of foods in terms of nutritional quality.”

Thilsted shared the following four recommendations based on her research and experience working with countries around the world:

To fulfill the more systemic approach to nourishing nations, Thilsted said she spent a lot of her time abroad talking to government officials, urging them to support aquatic food production and consumption with state and national policies.

One place she had success was Bangladesh.

The country’s government saw the value of the pond polyculture that Thilsted and her team introduced to increase production and diversity of aquatic foods. Apart from achieving both of those aims, nutrition-sensitive polyculture also negated the need for pesticides, which reduced cost and led to a ban on using pesticides to clean ponds in Bangladesh.

Other initiatives Thilsted implemented included new aquatic food products. Fish chutney and dried fish powder, among others, are used in Bangladesh, Cambodia and other countries to help women and children receive proper nutrition.

A socioeconomic benefit of the nutrition-sensitive approach was the increased engagement from Bangladeshi women and a state program giving them fish farming opportunities.

Although Iowa sits thousands of miles away from Bangladesh, Thilsted’s research could help Midwest aquaculture think about some of the issues it’s facing.

Joe Morris is the director of the North Central Regional Aquaculture Center, one of five regional aquaculture centers funded by the U.S. Department of Agriculture’s National Institute of Food and Agriculture.

He said consumer demand for seafood has shot upward in the last few decades as more people desire the nutritional benefits of fish, but that creates concerns about delivering what consumers want while competing with other livestock industries on cost.

“I’ll bring some of [Thilsted’s] ideas to the aquaculture community in the Midwest, because we’re asking different questions now than we asked 30 years ago,” Morris said. “Thirty years ago we would ask what species to raise. Now we’re asking: What do the consumers want? And how can you do it economically? Maybe the next stage is we address what the consumer wants, and how do we get a nutritionally sound product to those consumers.”

Morris said exploring what processing seafood in the Midwest would look like is a possible solution to mitigating import costs while meeting demand.

The Borlaug Dialogue continues through Friday; you can register for events here. Learn more on worldfoodprize.org.