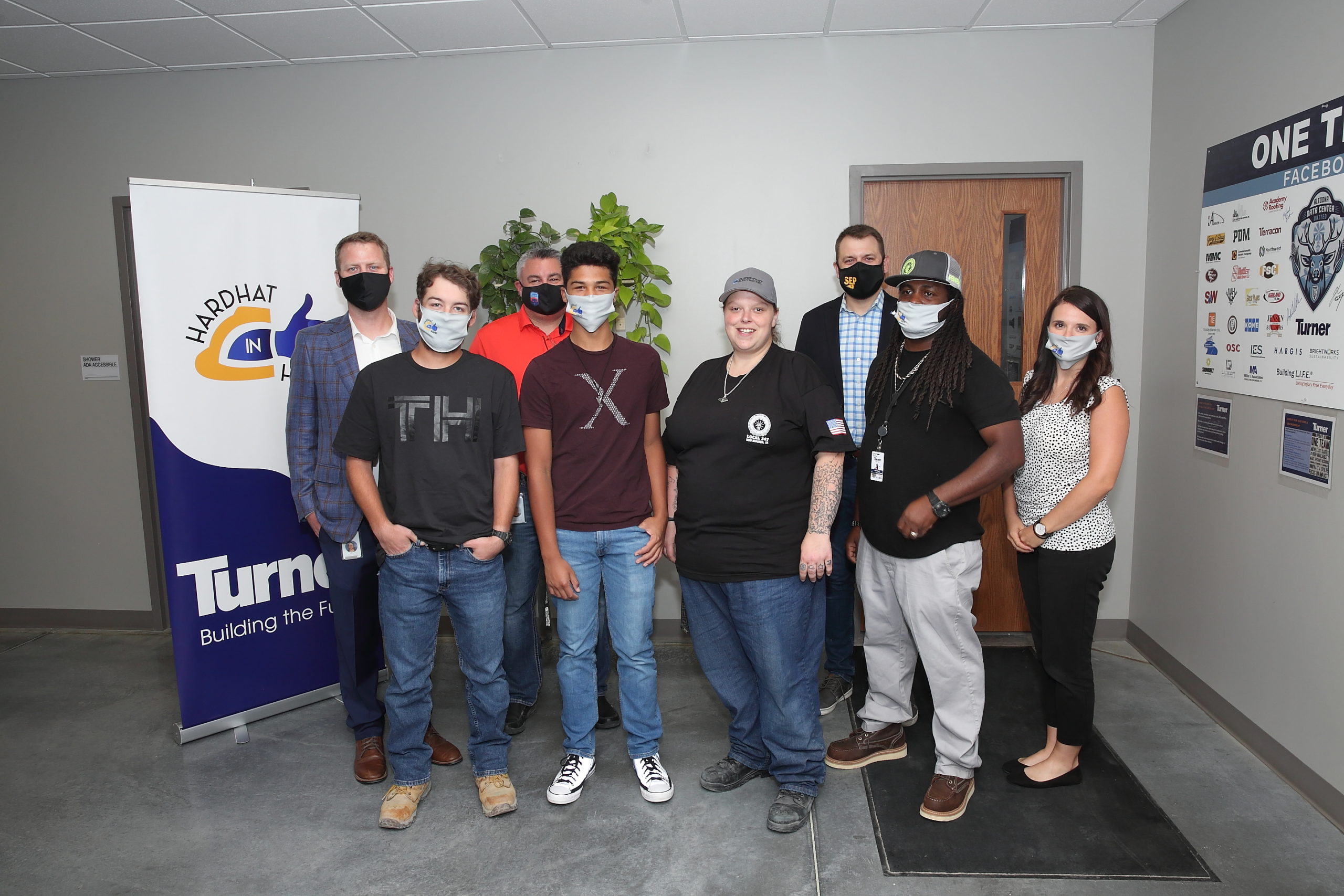 Timothy McCoy was volunteering at Creative Visions, a nonprofit community center in Des Moines, when an employee there approached him about joining Facebook’s new construction training program called Hardhat in Hand.

Although McCoy is a certified carpenter and had worked in residential construction, he was hesitant about joining the program. It was the number of specialties and credentials that were available that changed his mind.

Facebook launched Hardhat in Hand at several pilot locations this summer, including the Altoona data center site, before announcing in September the program would expand to all of the social media company’s active U.S. data centers by the end of 2022.

Hardhat in Hand is a paid eight-week training program that uses construction projects at Facebook data centers to launch new workers into careers in the skilled trades.

Local partners help deliver the program, with Des Moines Area Community College instructors providing classroom instruction during the first four weeks and Turner Construction, the general contractor for the Altoona data center, and its subcontractors training participants on-site for the program’s second half.

All graduating participants are guaranteed full-time jobs with Turner or one of the subcontractors. Sara Hansen, workforce development manager at Turner, said the company aims to recruit around eight to 16 participants per cohort to accommodate the accelerated pace of the training.

The pilot held at the Altoona data center this summer graduated four participants, including McCoy and recent high school graduate Adrian Bautista, who both now work for Cupertino Electric Inc.

Bautista’s graduation from Central Campus aligned with the start of the pilot and as he saw himself learning a trade rather than going to college, Hardhat in Hand was the right fit at the right time.

In addition to their current full-time jobs, Hardhat in Hand gave Bautista and McCoy an opportunity to brush up on technical math skills and gain certifications in workplace safety.

“The CPR and the OSHA 10 were a big plus. When I got to the field, a lot of people were surprised that those things were already in line,” McCoy said. “Along with the lift training, those three things gave me an edge when I hit the field.”

With Hardhat in Hand, Facebook is joining the list of Iowa’s workforce development efforts and partners aiming to introduce Iowans to the careers available in the trades industry.

Those familiar with skilled trades may already know, but according to data from Iowa Workforce Development, the need for workers continues to grow.

Ben Hammes, the director of public affairs for Master Builders of Iowa, said he’s heard from a majority of the association’s approximately 400 members both in and outside the Des Moines area saying they have six to 12 months of work already lined up.

This is positive, Hammes said, as a signal that there is plenty of work, but it is also a concern that a lack of workers in addition to supply chain disruptions may inhibit companies’ ability to accept more work.

“If you have 12 months of backlog, then you start looking at potentially having the manpower to do all that work, and so they may not contract out further than that,” he said. “The business will say we have to get through these six months to determine whether or not we can take on that job.”

Both Hammes and Facebook’s local partners told the Business Record that some of the challenges in recruiting workers to construction jobs is people’s lack of exposure to the industry and the array of work available.

Galen Briggs’ role as a coordinator for DMACC’s Continuing Education program primarily involves designing and facilitating the delivery of noncredit certificate programs tailored to skilled trades industries like construction or manufacturing that set students up for a transition to an apprenticeship or for-credit courses.

While health care, information technology, transportation and manufacturing are industries that come up “all the time” for Briggs and his colleagues, he said workers’ attention to jobs in construction and other skilled trades had waned, but interest has started to recover in recent years.

“Kids in high school, maybe they don’t have the exposure to a lot of the kind of skilled trades classes that they had 30 years ago or more when I was in high school so there’s kind of a lack of interest in being an electrician or being a plumber because those folks, you know, they just don’t hear it, they don’t see it [or] do it as much as what they used to,” Briggs said.

Hansen said one explanation for the workforce gaps is the movement away from companies that are passed down to the next generation, which eliminates a source of exposure to the industry for high school and college-age students.

That now places more of an onus on employers, workforce developers and industry representatives to collectively do the outreach and the onboarding of new trades workers.

For Hardhat in Hand, Turner worked with Briggs to develop the classroom curriculum that participants learn during the first half of the program. Through the partnership, DMACC was able to build a noncredit certificate that both is tailored to the needs of contractors working on the Facebook data center project and gives graduates a pathway to further their education.

Briggs said the relationship with Turner is an example of how “invaluable” input from businesses and industry is when the continuing education program is looking for the needs in the workforce.

“Having businesses reach out to us to help us identify what those needs are, businesses like Turner who’s willing to not only be specific about what the needs are, but they also bring [something] whether it’s funding, or whether it’s subject matter experts, they can help us add credibility and experience to the training,” he said.

But before students can start a program or an apprenticeship, Hansen and Hammes said businesses and industries need to tackle how the skilled trades are represented to those looking for careers.

Hansen said when Turner visits local schools, they tout the variety of work students can pursue in skilled trades.

“Most people don’t think of glaziers or fire suppression sprinkler techs or sheet metal or pipefitters, and so [we’re] really making sure that when we’re seeking that next generation of builders that we’re exposing them to all of those opportunities that are out there,” she said.

Anyone who is 18 or older and has a high school diploma or GED is eligible to apply for Hardhat in Hand, so Hansen said by partnering with community organizations and building on Iowa’s existing workforce programs, Turner is able to “cast a wide net” when looking for new participants.

Hammes said the job openings in entry-level skilled trade roles can partly be attributed to a “cultural shift” that tells students that going to a four-year college offers the best chance at success.

“I think it’s scary in some ways that people think that they’re letting down their students or their kids by presenting these other options,” he said. “What we tried to do is present the idea that these are really good and rewarding careers, and we have to take a second look at these because, not to take anything away from a four-year education, two-year education, they are all relevant to some people, but they are not relevant to everybody.”

In order to help change the narrative, Master Builders of Iowa has several initiatives and resources to share with families and schools. The Build Iowa website provides profiles of different construction jobs, including training required and average wages, and the MBI Works Endowment totals $5 million to support programs with “innovative ways of getting kids into construction.”

McCoy is one example of the value workers can find through skilled trade jobs. Getting back into construction through Hardhat in Hand allowed him to discover a meaningful long-term career that “comes with more than a job.”

“Before I was kind of up in the air about what I wanted to do as far as career paths and further education,” he said. “This allowed me to actually carve out a clear path mentally to know what I plan on doing in the future, which is continuing with this.”

A new cohort of Hardhat in Hand started at the Altoona data center on Oct. 18 and Facebook anticipates it will offer a spring 2022 cohort as well.

And with the announcement of an expansion at the Altoona data center in May, there will be ongoing construction at the site until 2023, according to Facebook Community Development Manager Matt Sexton.

Find updates on Hardhat in Hand on the Altoona Data Center Facebook page.