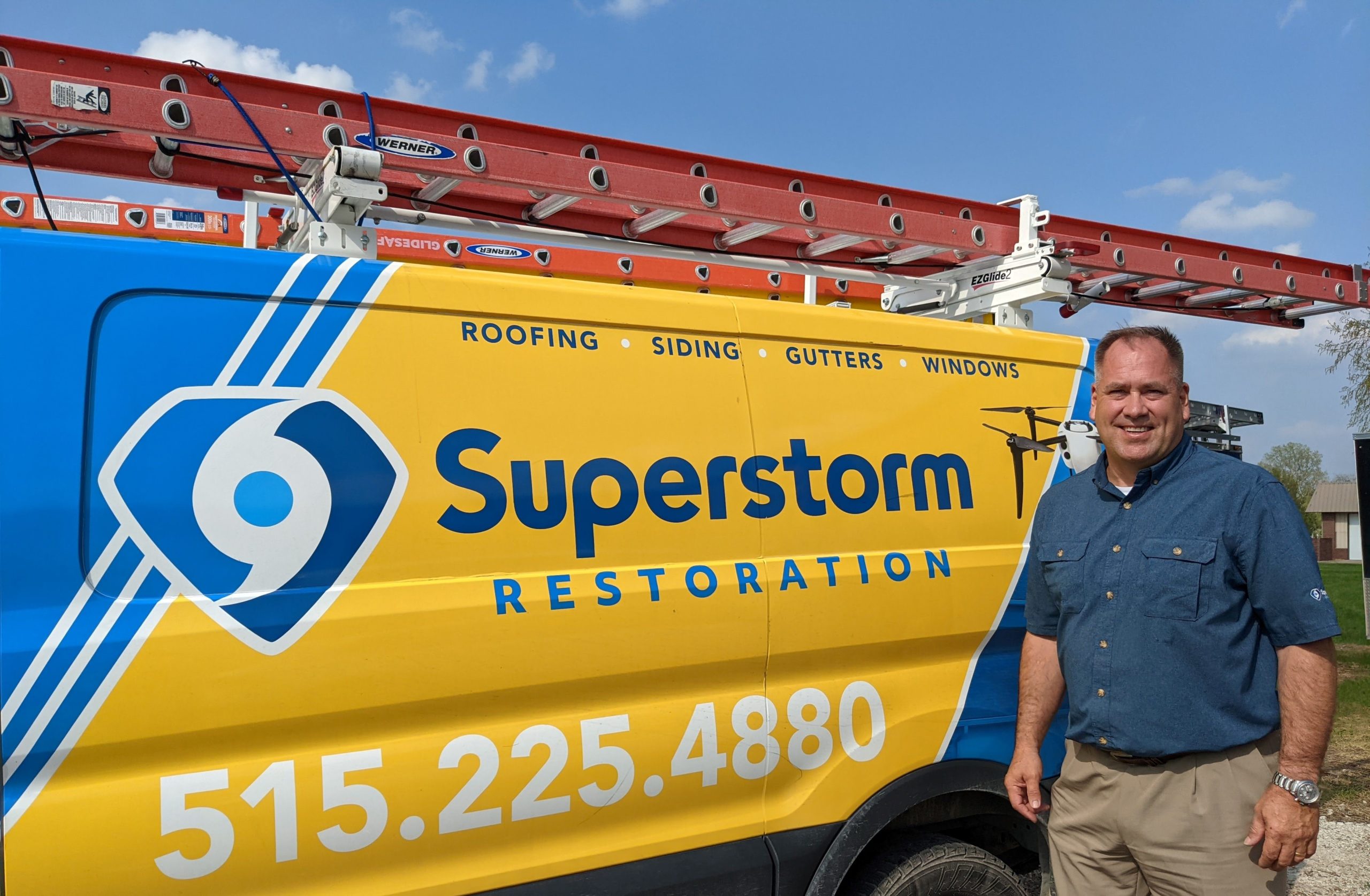 Iowa roofing contractor looks forward (and up) with integrated technologies

Comparing storm pictures and damage with neighbors and co-workers after weather strikes is a frequent occurrence among Iowans, but sometimes Iowa’s weather events demand more intervention.

Iowa-based roofing and exteriors contractor Superstorm Restoration has been making strides with technologies to simplify the evaluation and repair process for contractors, insurers and homeowners.

President and owner Chandler Steffy’s background is in residential construction, an industry he left during the 2008 recession to move over to contracting.

A problem he noticed quickly was that some contractors, often from out of state, will come into neighborhoods after a storm and tell homeowners they have roof damage without doing an evaluation.

So when Steffy started Superstorm Restoration in 2014, he did it with the intention to build relationships with clients and educate them so they can avoid unnecessary repairs.

“Out of 10 homes I evaluate, at some point in the next 10 to 15 years, those 10 homeowners are going to need my services. … I can create a relationship with all 10 of them and [the] two or three that might have damages or maintenance or repair, I can help them out at that time,” Steffy said.

This mindset led to the company’s first endeavor into technology around 2016 using CRM software from Wisconsin-based roofing software company AccuLynx to collect data on the condition of clients’ roofs and determine when services may be needed.

A separate software pins the houses of Superstorm clients and notifies the contractor when a storm producing hail big enough or wind strong enough to cause damage hits the flagged properties.

Steffy leased drones and began using them as part of evaluations in 2017 to verify the damage observed through a physical evaluation of the property and roof.

Around the same time, he was introduced to Des Moines data analytics company InfraLytiks. Its team built a mobile app for Superstorm that allowed them to record observations of damage during their physical inspection and generate a report on the damage for homeowners or insurance companies.

That was only the beginning of the relationship — Steffy asked InfraLytiks about two years ago to develop a drone fit for Superstorm’s needs so the company could move away from leasing. The drone and its algorithms have been used in evaluations since this spring, but InfraLytiks had a proposal for Steffy when they delivered the product: start another company and deploy their process to other contractors.

Together, they created Verified Data Analytics, of which Steffy is the majority owner, and he plans to bring it to market this summer. It comprises the app, drone, a web platform and automated analytics, which are all used by Superstorm.

The drone’s proprietary algorithms generate a wireframe with the roof’s measurements and identify the components of the roof such as the box vents. This report is uploaded onto the web platform, where Steffy can identify what is a maintenance issue and what needs more work.

The measurements from the drone report help ensure accurate estimating of costs. Superstorm uses either Xactimate or Symbility, which are two popular options for insurance companies.

Steffy said the Superstorm and now VDA process was built to “mirror” those of insurance companies to relieve pain points for insurers and homeowners.

Glenn Waterhouse, a State Farm insurance agent, said Superstorm’s reports hand the homeowner and the insurance company all the information they need to determine if there needs to be a claim on the damage.

Steffy and InfraLytiks are working to add more features, including wind and hail damage detection in the drone’s software, but Steffy’s mind is largely on integration of the different softwares Superstorm uses to further streamline the evaluation process and help homeowners who don’t need immediate repairs plan for the future.

“I ultimately believe that once all these integrations are coming into play a contractor like myself will have an end-to-end solution for a customer where I can do an evaluation and in a matter of doing the evaluation, I’ll have a cost and be able to put a bid on the table right there in front of the customer in next to real time,” he said.

Part of Superstorm’s innovation is that the integration with the insurance side of the evaluation and repair process isn’t limited to times where a homeowner needs to file a claim and have damage repaired.

Typically, insurance policies are written before any evaluation for preexisting damage is done. Waterhouse said “if [the process] ever flipped” and the evaluation came first, it would save insurance companies money upfront and change how the policy would cover further damage to the property.

Steffy is working with AccuLynx so that down the line the drone’s software will be able to detect not just the roof component but the specific product and its price. For Superstorm and other contractors, he said this will help determine the cost of a repair and whether the insurance company’s estimate fits in their budget.

As insurers, knowing the value of the house’s components could transform the underwriting process. Using Light Detection and Ranging (LIDAR) technology available on some cellphones, Steffy said underwriters could be getting a lot more detail about a home’s value within the next five to 10 years.

“We’ll be able to walk around a property. It’ll identify the siding, the type of shingle, what the cost is, and it’ll spit out a number to [the insurance agent] that says if this is a full replacement, this is a $450,000 replacement in today’s dollars. … That’s the future, if you can think that crazy,” he said.

The risk prevention component of the solution comes into play for Superstorm as the company helps homeowners avoid claims by doing maintenance as needed. But Steffy said larger insurers like EMC Insurance Cos. can use the VDA software in ways that work best for them.

Chad Veach, assistant vice president and innovation manager at EMC, said employees of its risk improvement department who have their license to pilot drones commercially are using the VDA software to capture imagery via a drone and analyze the data to create risk management plans.

Risk management plans identify ways a policyholder can improve the condition of their roof in this instance to fend off damage that necessitates a claim later. Veach said the software’s value is heightened by the desire of commercial clients to prevent a costly roof repair or replacement.

EMC also sees a potential to use the data from the software to ensure the level of insurance meets the value of the building, he said.

He said whether it’s insurance or contracting, any industry risks becoming “irrelevant in their market” if they don’t acknowledge and embrace innovation.

“There’s certainly an opportunity to provide more than just the traditional insurance product. From [a product] that is only one of indemnification to one that is indemnification plus services to predict and prevent loss and reduce the cost of insurance. I think that’s where the industry is heading,” Veach said.

Waterhouse said Superstorm is a contractor that has capitalized on the available innovations to a point that they are positioned as a leader among contractors.

“What’s going to happen is when you’re the trendsetter or the pacesetter, other people are going to try to start following and mirroring. He’s just going to have a big head start here,” Waterhouse said. “Then what he’s going to have to do is take the next innovation and next thing and try to be out in front while everybody’s catching up.”