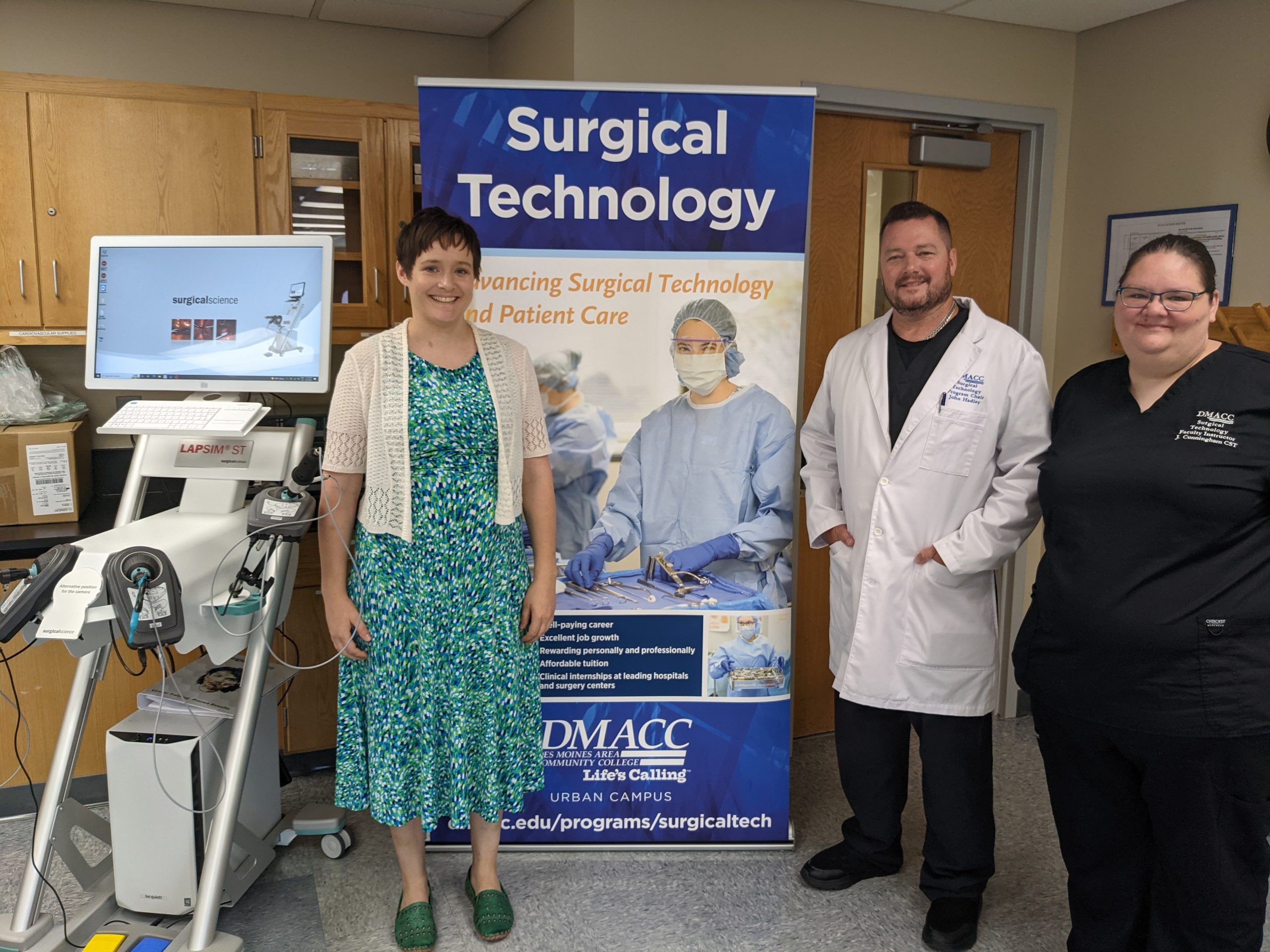 The faculty of Des Moines Area Community College’s surgical technologist program is preparing for a larger class this fall in a refreshed classroom with new equipment. That includes three practice operating rooms, recording equipment to allow professors to record labs and monitor students remotely, a sterile processing and central supply area, and a 3D laparoscopic surgical simulator (pictured at right).

With the high demand for certified surgical technologists, or CSTs, in Des Moines and across Iowa, program chair and professor John Hadley said the new features are meant to replicate an operating room environment and help students enter the clinical portion of their education and first job feeling prepared.

“We’ve worked so hard on that fall lab to have them ready for clinical. … It’s challenging enough to have to sit and absorb those surgical procedures with different surgeons every day,” Hadley said. “We don’t want them to be worried about their personal skills.”

Students did not have access to clinical sites during the height of the pandemic, Hadley said, but now the situation has reversed where hospitals and surgery centers are all looking for more students than before to do their clinical work there.

The surgical technologist program at Mercy College of Health Sciences closed during the pandemic, which opened up additional clinical sites for DMACC to use.

Still, that doesn’t change the growth the profession is seeing. Hadley said between the six programs in the state, meeting the workforce’s needs will “never happen.”

A CST is primarily responsible for setting up and tearing down equipment in the operating room, maintaining a sterile environment during surgery and assisting the surgeon with tools and instruments. Today, those skills are needed in more specialties — from dermatology to obstetrics to radiology — as minimally invasive surgery becomes an option to treat more conditions.

But procedures and surgeries don’t happen when there aren’t enough personnel to assist.

Hadley said part of DMACC’s response to the workforce need included raising the number of enrollment spots for this fall’s and future classes from 20 to 24.

The Association of Surgical Technologists also required that all surgical technologist programs in the country transition to an associate degree program, which DMACC did in August 2021, but Hadley said that doesn’t ensure students trained in Iowa will stay to work in the state.

After receiving their national accreditation, he said graduates are likely to go work in states that pay more for the role than Iowa does. Iowa currently does not require CSTs to have a credential, but changing that with legislation could help raise earnings locally.

“Certification legislation requires employers to hire professionals that have proven their knowledge of best practice standards and patient safety,” he said in an email follow-up. “CSTs are required to accrue 30 continuing education units every two years, like nursing. This keeps the practicing CSTs in the industry performing with the most current patient safety practice standards. [Continuing education] cost money. Education costs money. Pay will need to increase to employ credentialed employees.”

It’s been part of his strategic plan as president of the Iowa State Assembly for the Association of Surgical Technologists and he said there has been progress on the issue over the last five years.

The program faculty, including new professor Esther Fraser, told the Business Record more about addressing the workforce need and new trends in the surgical technologist profession.

Other than the degree programs, is there anything else that would help meet the need for CSTs?
John Hadley: The most challenging thing for us as a program is to create awareness and show that there’s an option. You may not like nursing; here’s something way more fun than doing all that. The tough thing about this for us is a lot of people will move on from this field as well. They’ll get a job in a hospital and the hospital will say, “Hey, we’ll pay for your nursing school.”

Esther Fraser: Or they’ll go into a medical technology company because they know how to use it all.

Joyce Cunningham: Or the assisting side and they become first assists or physician assistants. Doctors will hire them.

How do surgeries that use robots change the CST’s role in the operating room?
Hadley: The procedures themselves change a lot and continue to evolve. That’s one of the attractive things about the field, that not just the surgeons’ role, but everyone that works with them, their role is going to change along with that. With robots, that changes the role for pretty much everybody at the table. CSTs have to deal with the robot a little more. And it’s not super complex, it’s just that it’s different. It’s just a different piece of equipment that you have to know how to use properly to make it work right just like a laser or anything else that we use.

The complexity of their role is much different. When I started doing robots in cardiac surgery, to do all that in cardiac surgery is a huge endeavor because you’re still having to put people on bypass with a heart-lung machine, and you’re going to do the surgery minimally invasively instead of opening up their chest. Then you have the whole robot — it’s just a ton of equipment in a room and it takes twice as long to set that up. It would take us two hours to set up for a robotic cardiac case.

CSTs use preference cards stored online to check what supplies they need for each surgery. How can the process of updating these cards be digitized?
Hadley: There’s sort of a mad rush into it right now. There’s lots and lots of products that are available. The products that have the highest value are the ones that can interface with other programs you’re using in the operative areas. Different things catch on in different areas, but what’s really necessary is something that can adapt to any computer system, and that’s a huge challenge.

There’s new apps for mobile phones now that are starting to develop that are much more powerful and make it easier to edit preference cards whereas if someone has to go sit down in the operating room and actually log into a computer to edit a preference card for a procedure that they did two weeks ago, it’s not going to be that accurate. What happens in the [operating room] is because of the shortage of people there’s just not a lot of time available for updating preference cards so they don’t get updated as much as they need to be.