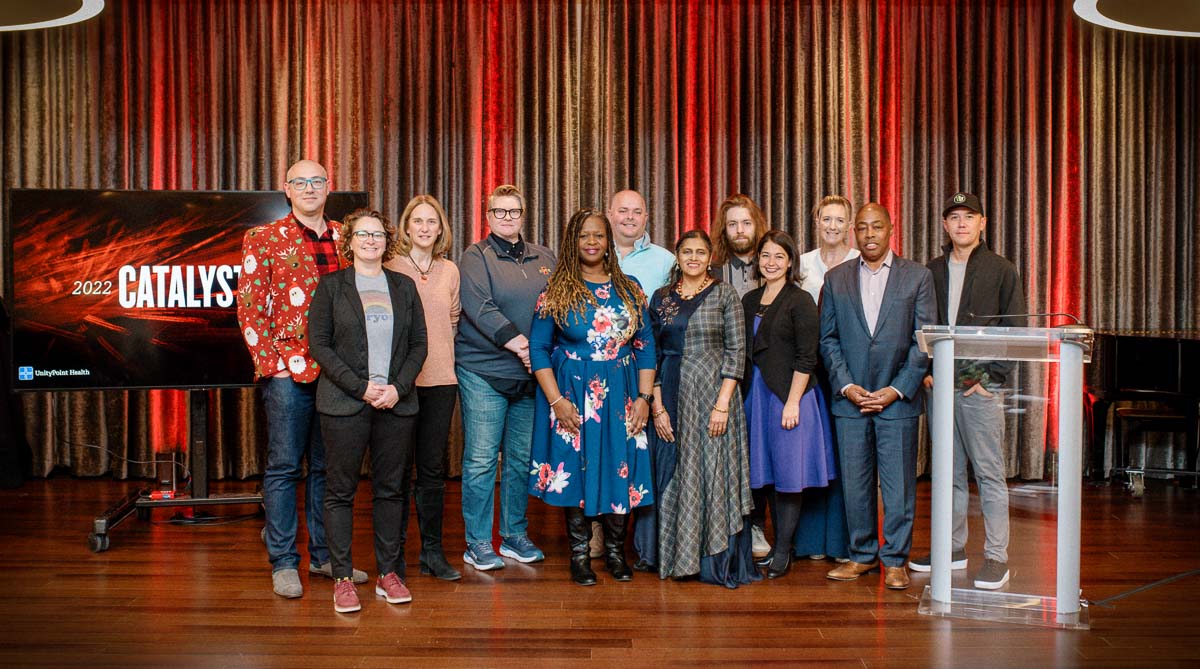 4 ideas for taking action on DEI from Catalysts Live

The updated statement spoke to a similar shift in this year’s Catalysts initiative by the Technology Association of Iowa. This year’s event was a platform for Iowa organizations to share about outcomes from ongoing DEI efforts that can help guide other companies, an idea that came from the chair of TAI’s board of directors and UnityPoint Health Chief Information Officer Laura Smith.

“For the last four or five years we’ve been profiling individuals in the state of Iowa, just one person is doing really great work within DEI,” TAI President Brian Waller said. “What we did every year is we [took] a pebble or a little rock and we [threw] it in the lake and then watched it ripple. This year, she said, ‘Let’s throw boulders in that lake.’”

The eight Catalysts profiled in 2022 were:

Here are ideas from four of the organizations around introducing or advancing diversity, equity and inclusion initiatives.

Workiva: ‘The S of ESG is the next big thing’
Mandi McReynolds, Workiva’s head of global environment, social and governance, said at the heart of ESG are all stakeholders, including investors and employees, “demanding that businesses have both mutually beneficial relationships between themselves and the communities.” But making that happen requires translating organizations’ values to business value, she said.

She said the environment component of ESG has “gone first,” largely because it is easy for companies to measure the long-term risks and cost-avoidance associated with environmental issues.

There is movement to define the business value of the S portion, but investors are seeking more from the social and DEI metrics currently available, according to a survey by Workiva.

The company’s head of belonging, Binny Nanavati, said a crucial first step for companies is not only understanding where they are with DEI but not getting stuck because of it.

“We want to begin with, first, an honest assessment of where you are as a company and embrace it, own it,” Nanavati said. “Don’t get frozen into saying, ‘Well, we’re not really there yet’ or ‘Here’s what our future should look like’ or ‘Here’s what we say we are.’ Actually go ahead and own it. A lot of companies do get frozen by the current realities. What will happen is they’ll say, ‘Well, we can’t talk about pay equity because we’re not in a good position yet. We can’t talk about gender diversity because we’re too white-male-dominated.’ I mean, you are where you are, and you have to embrace that.”

Grand Consulting: Build inclusion through apprenticeship programs
Igor Dobrosavljević shared his journey living his American dream, emigrating from Yugoslavia to Iowa as a teenager. He started working a part-time IT job in high school that led to his starting Grand Consulting in 2008, an IT support firm for small and midsized businesses.

Some of his realizations as he sought to grow the company were that the path to achieving his goal was not the same for everyone and the people he was looking to hire did not require a college education.

“I noticed that a lot of our applicants for our open technical positions, well, they didn’t look like me so it actually hit me that maybe I was able to live my American dream because of all the structures that are in place that have opened doors for people that look like me,” Dobrosavljević said.

Since starting an apprenticeship program at Grand Consulting in 2016, he has become an advocate for how the approach can democratize access to education in technology as well as other fields.

“My hope is that Iowa will be at the forefront of this and I hope that one or two of you that are listening to me today that have power to effect change in your organization will go back and consider amending your hiring process and adding an apprenticeship to their program, because the prerequisite for Iowa being at the forefront of this is many different organizations providing a diverse and enduring set of apprenticeships that people can rely on being there for them when it’s time to enter the workforce,” he said.

Whether a disability is visible or invisible, Wiley said students they work with often feel they aren’t seen when their accessibility needs go unaccounted for in their environment.

The Digital Accessibility Lab at Iowa State is one effort across Iowa’s higher education institutions to improve digital accessibility for all at the university. Its aim is to be a place “where people could realize the possibilities offered by technology rather than barriers can often create.”

“When we are designing and creating inclusive experiences in the lab, it is more important to design with others and not for others. There’s a saying in the disability community: Nothing about us, without us,” Wiley said. “Us together made this happen and us together will keep this going. My challenge for you all today … is to start looking for people to hire that have expertise in digital accessibility.”

Before hearing about someone’s qualifications in an interview, Mac Nab said he purposely dives deep into their upbringing and what experiences influenced them. That reveals if they have the three things he said he can’t teach: attitude, work ethic and grit.

“I’ll take six to nine months teaching you the business, but I can’t teach you in a lifetime what you experience between the ages of zero and 18 no matter what your age is,” Mac Nab said.

Pagano said VizyPay’s mindset of intentionally hiring outside the payments industry and “giving everybody a shot” resulted in a group of employees with diverse background and knowledge.

“As we started building this company up, it was like, wait, this is actually working; this isn’t a theory, this actually works. Taking people’s unique perspectives and giving them a voice and letting them be themselves and be able to talk to us, it actually started working,” Pagano said. “I think that’s one of the reasons for our success. It’s not because we have the most revolutionary products or that we have the most talented sales force in the world. It’s because of the people that we’ve brought in and have given an opportunity to have a chip on their shoulder. They’ve been given opportunities that maybe they wouldn’t otherwise be able to find.”

Mac Nab encouraged more companies to move away from traditional interview questions that only touch the surface level of who the potential new hire is.