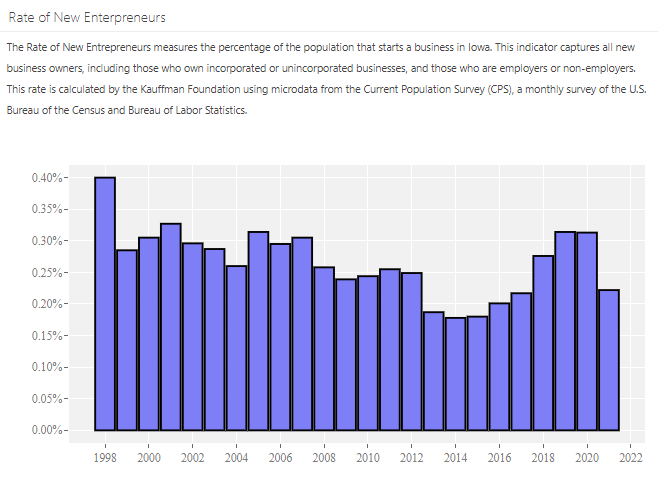 The Greater Des Moines Partnership and local digital news publication Clay & Milk have announced the launch of the Iowa Innovation Dashboard, a tool created to measure entrepreneurial activity across Iowa.

The dashboard shows measurements of business density, survival rate, research, investment capital and demographics regarding entrepreneurship in Iowa, according to a news release. Locally, Clay & Milk, BioConnect Iowa, the Iowa Economic Development Authority and the Iowa secretary of state’s office provided data for the dashboard. Other data sources include the Bureau of Labor Statistics, the U.S. Census Bureau, and the U.S. Patent and Trademark Office.

“We strongly believe that Iowa’s entrepreneurial community is better when we have data and transparency around key business indicators,” Diana Wright, startup community builder for the Partnership, said in a prepared statement. “Prior to the Iowa Innovation Dashboard, the data wasn’t easily accessible and where does one start? This project is the starting point. We know entrepreneurs create value in many ways. Data storytelling can be a powerful tool to better understand entrepreneurship in Iowa.”

The Partnership and Clay & Milk plan to update the dashboard twice a year, with plans to add new metrics in future iterations, the news release said.

The dashboard is available to view at iowainnovationdashboard.com.