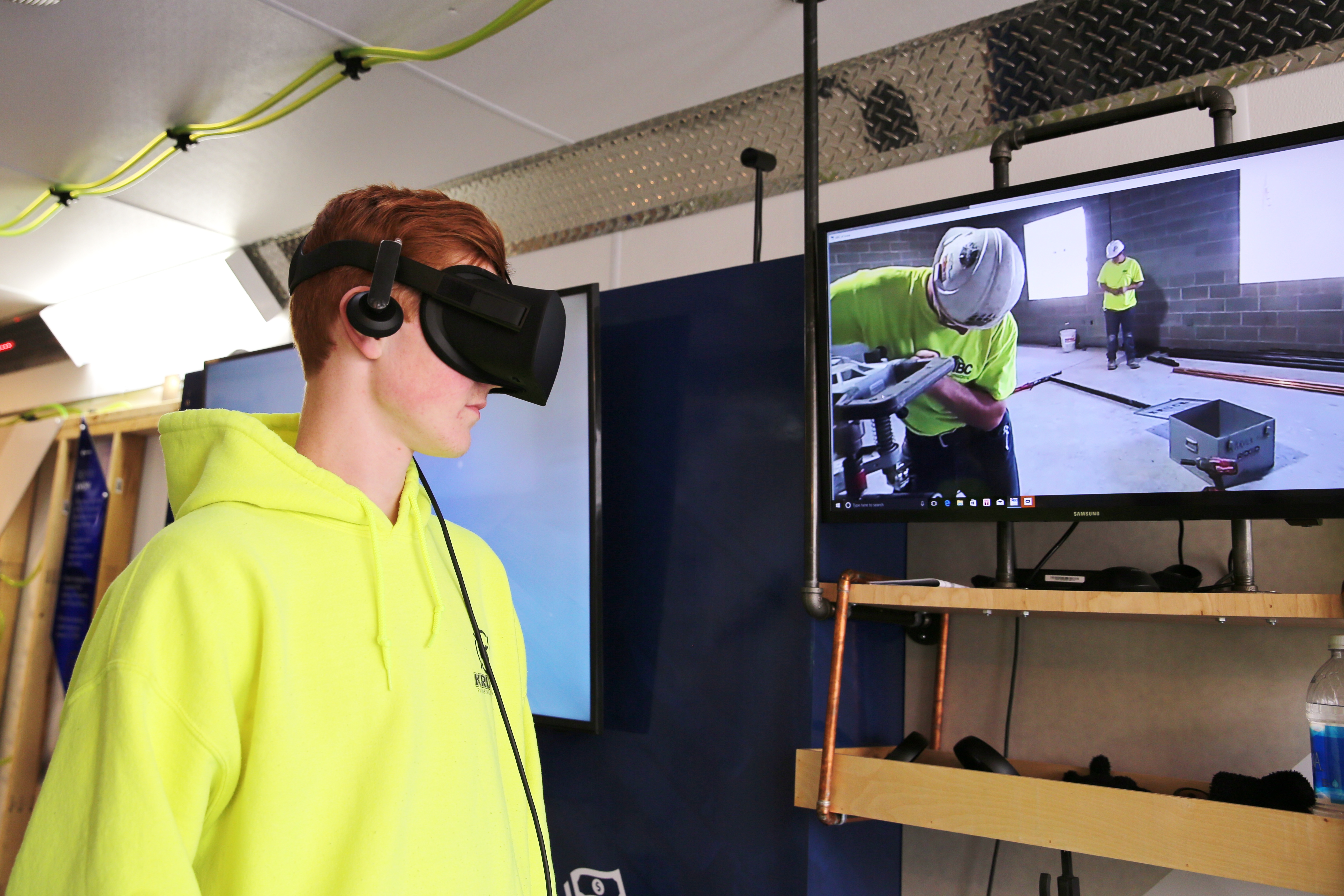 Virtual reality right outside the classroom

Finding ways to attract high school students to a trades career is a tough nut to crack for industry advocates. At a student careers fair in Boone on Tuesday, Associated Builders and Contractors of Iowa (ABC for short) showcased a new piece of the toolkit: a virtual reality-enabled demonstration trailer.

Measuring in at about 36 feet long, the High School Career Exploration Trailer houses three virtual reality headsets, five television sets and a cross-section wall display of plumbing, framework and notes on the construction industry in Iowa. Students putting on the VR headsets choose among several one-minute trade videos they’d like to try — and find themselves right in the middle of an ongoing project. “Our board of trustees decided that they wanted to create something that was hands-on and mobile, that we could take to all the high schools across the state of Iowa and showcase what a career in construction is really like,” said Ginny Shindelar, vice president of education and training. “You can really feel like you’re on a job site, whether it’s plumbing, electrical, welding, sheet metal or HVAC. All those trades are covered in the videos.” The trailer was introduced in October 2017 at an ABC open house, and there are plans to take the unit to several more Iowa high schools in the spring and fall this year. “Since we do have such a major skills gap right now — we’re about 1.5 million workers short and will be even more by the year 2020 –we’re really trying to help our members and help the industry by bringing that awareness, and showing parents, high school students, guidance counselors and principals that there is a great opportunity in construction,” Shindelar said. Students in ABC’s pre-apprenticeship program have already been able to sample the VR tour.Seniors Garrett Bales and Jake Gourley use ABC’s pre-apprenticeship program to start earning certifications — Gourley has already received a forklift certification. “It’s pretty cool. … The best thing about it is you get to see what they’re doing,” Gourley said. “A lot of people like me are visual learners, so it helps a lot.” ABC is interested in taking the trailer to even younger eyes at Iowa middle schools, Shindelar said, to introduce those career paths earlier to students. ABC currently has three training centers across Iowa, with about 1,500 apprentices in their education programs.“We knew we had to do something to really get high school students’ interest. Everybody’s on phones or tablets,” she said. “We also wanted to show that construction is really changing. … We thought this would be a great way to show them what it’s really like on a job site.”ABC is inviting Iowa legislators to try out the headsets on March 27, when the trailer will park outside the state Capitol from 11 a.m. to 1 p.m. Pre-apprentice and apprenticeship students will be there to speak to lawmakers, she said. “We really want them to understand the importance of not only funding education opportunities for construction careers, but also for them to realize there is a major skills gap, and we’re trying to help fill that. We just need support of all the initiatives that we’re trying to do,” Shindelar said.
Uncategorized
Women in startups push back at lack of venture capital opportunities
Iowa City Chamber of Commerce: Now accepting Bitcoin