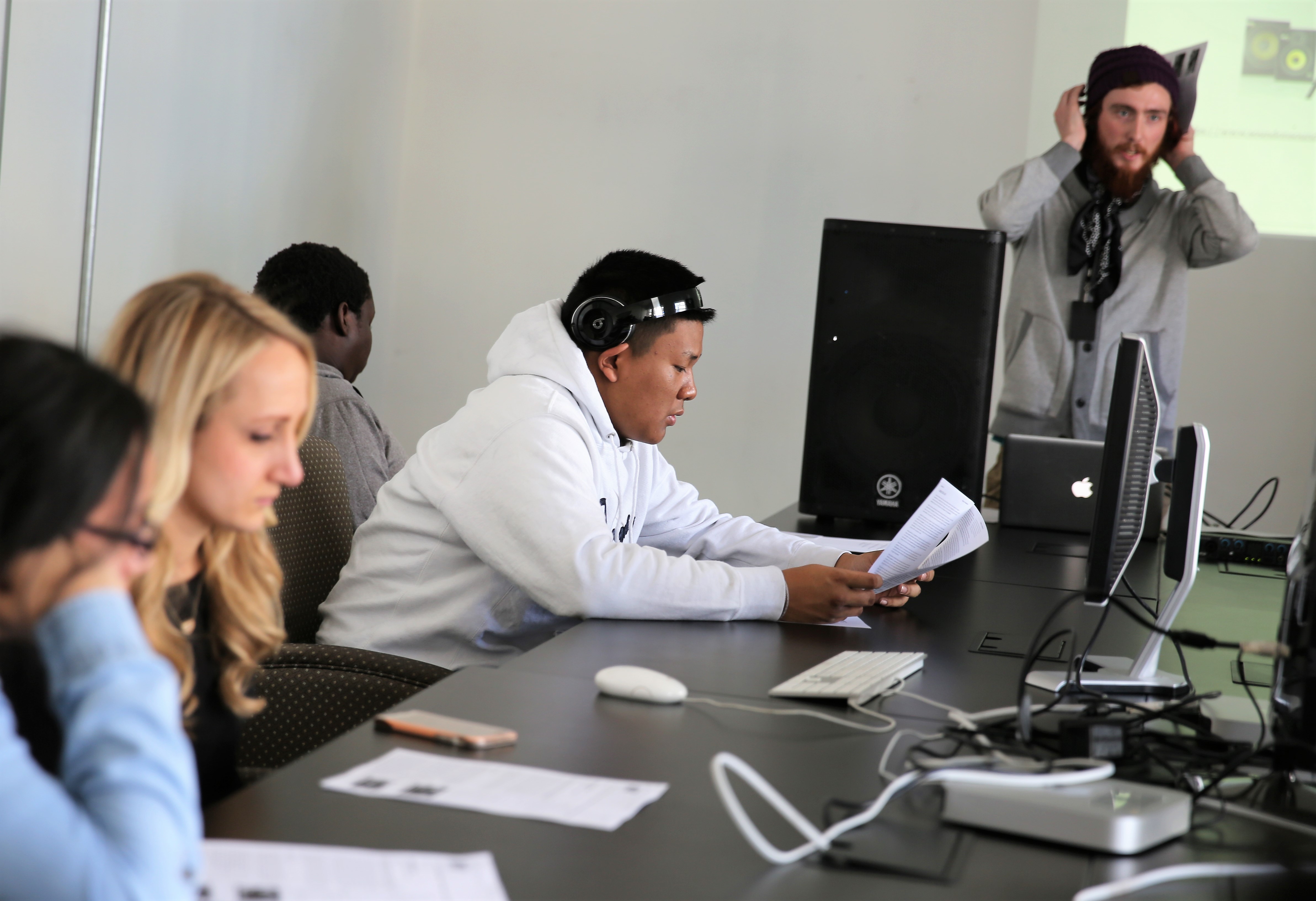 Junior Luz Bautista sat in the Des Moines Social Club with her East High School classmates on March 29, their first day of audio class.Bautista doesn’t have any experience with audio production, although she’s been involved in play productions, producing the annual fashion runway event and Movement 515, a spoken word poetry initiative.“I love singing, so I was interested in how that works,” Bautista said. “Mostly I like pop music, Mexican pop.” Junior Stephon Field learned basic techniques in hip hop and rap from his brother, but he never had an opportunity to take those experiences to a more professional level.“We’ve never had nothing like it. Growing up, I was always listening to music and wondering, how does that happen?” Field, an athlete and Urban Leadership student, said. “Being able to be a part of that, that would be something cool.” Bautista, Field and their classmates are exploring their first audio/music business lessons at the Des Moines Social Club, where the new class was organized by education outreach coordinator Monica de Melo Dreasher, technical director Ryan Lombard and East High counselor Lauren Brandt-Erickson. The class is free to East High School sophomores to seniors and led by Lombard, who will teach the basics of sound production. Brandt-Erickson will be monitoring students’ eligibility for the program — each of the 15 students are expected to have 90 percent attendance in their regular classes.“We have so many options within Des Moines Public Schools, but a lot of times it seems that music and business is sort of siloed off. You could say the same thing about performing arts in general,” Brandt-Erickson said. “We have a lot of students expressing this passion for the arts, but not knowing how to make a viable career out of it. … I feel like sometimes we lose engagement with students.”The coursework includes several opportunities for students to work with local recording artists for practical experience. Lombard will lead classes in one of the conference rooms and the Social Club’s recording studio, which hip-hop artists and podcasters alike have been working out of. Lombard and Brandt-Erickson are both seeking ways to showcase the students’ projects at the end of the term – and bring a new class of students on board for a possible second term next year.The Social Club is also seeking funding to secure recording labs in area high schools, starting with East, Lombard said. “At some point, we’d like to open it up and offer it to all students. From the beginning it was important to us to make it at no cost to students,” de Melo Dreasher said. “We’re working with the space that we have, but we’d love to expand it to those mobile labs so students can work in their schools, or come into the Social Club and do office hours here.”“It’s helping them see they can follow their passions, just maybe not on that level they’ve seen sensationalized in the media,” Brandt-Erickson said. “There’s so many opportunities in Des Moines, and that seems to surprise them, too.” “Hopefully they’ll be able to see themselves in one of those roles one day, even if it’s not production. … Even if one of them could see what Monica does at the Social Club (and say) ‘I could do that, I could make that happen for artists.’”