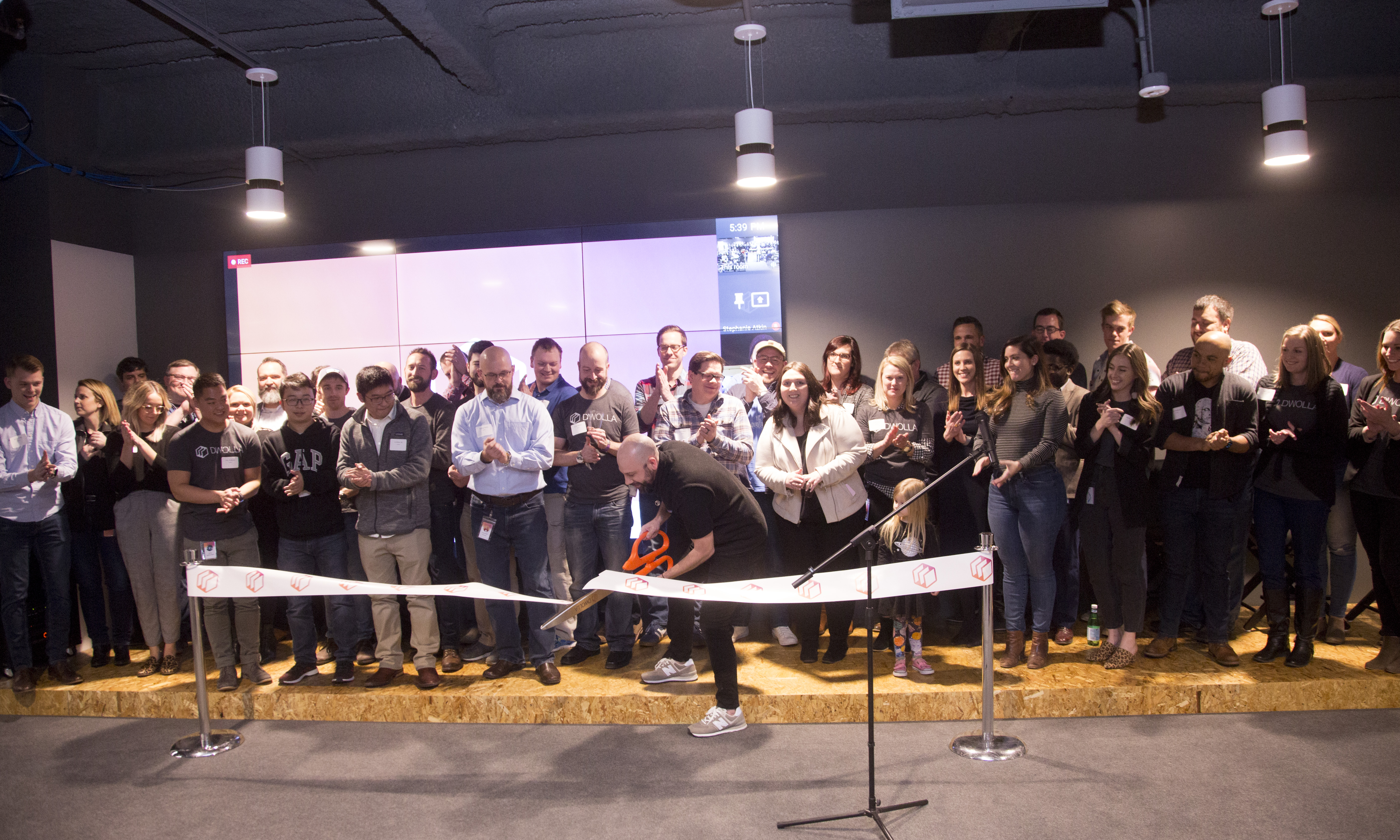 For all the celebrated focus on “being different,” there was one tradition Dwolla was willing to hang on to when debuting the new office on Wednesday evening:

“It feels fantastic,” Head of Marketing Stephanie Atkin said afterwards. “We’re adding new team members every single week … Right now we’re at 100 [employees], and adding 50 new team members in 2019. And we finally have the space to welcome them and have them join our team.”

Founder/CEO Ben Milne and the Dwolla team opened company doors to the public on the second floor of 909 Locust, where staff take up 22,000 square feet of open office-style space and a community meeting room that the startup offers to “critical organizations” for free, as Milne announced in a blog post last September.

The space is a big step forward from Dwolla’s three previous office spaces in Des Moines – and Dwolla, founded in 2008, is making big plans to match.

Dwolla nearly doubled in size during 2018, Atkin said, and the company is especially seeking new engineers to expand Dwolla’s ACH network payment platform for businesses. Expansion is not limited to the Des Moines office, however.

“We are not discriminating against location. Yes, our headquarters is in Des Moines and we have an office in San Francisco, but we also have remote team members,” Atkin said.

Staff members are also ramping up plans for Monetery 2019, the startup’s second event exploring how regional communities and businesses can create value – and tech companies – in the Midwest. This year, Dwolla is partnering with ten regional entities to host the conference at the Temple for Performing Arts on May 21-22; announcements on keynote speakers and registration will be released in March.

“When you have that support from that caliber of companies, we’re actually able to elevate our game and create a better experience for attendees,” Atkin said. “We are making an intentional effort to ensure that all of our sessions and all of our content are gender-balanced, and that we are bringing in people who have done it so that [attendees] can actually take those key insights from them.”

New this year, Dwolla is hosting a pitch day as part of Monetery with venture capitalists from both U.S. coasts present.

“We are having opportunities for startups to submit their pitches, and we are going to connect them with VCs,” Atkin said. “We want our ecosystem to flourish, but we’re not limiting it to anyone.”

“We’re taking the lens of, ‘let’s bring the best to Iowa, and let’s show the best what Iowa has to offer.’ That’s an exciting opportunity for us,” she added.

Admission from Monetery 2018 raised $10,265 directly donated to Pi515, a Des Moines tech-education initiative for grade 7-12 students led by Nancy Mwirotsi. Dwolla aims to raise funds this year for multiple nonprofits, Atkin said, although the company has not named who might receive 2019 funding.

“Our hope is that with the ticket sales, we are able to support more than just one organization,” Atkin said. “Pi515 is very near to our heart … I can’t imagine us ever not working with Pi515.”