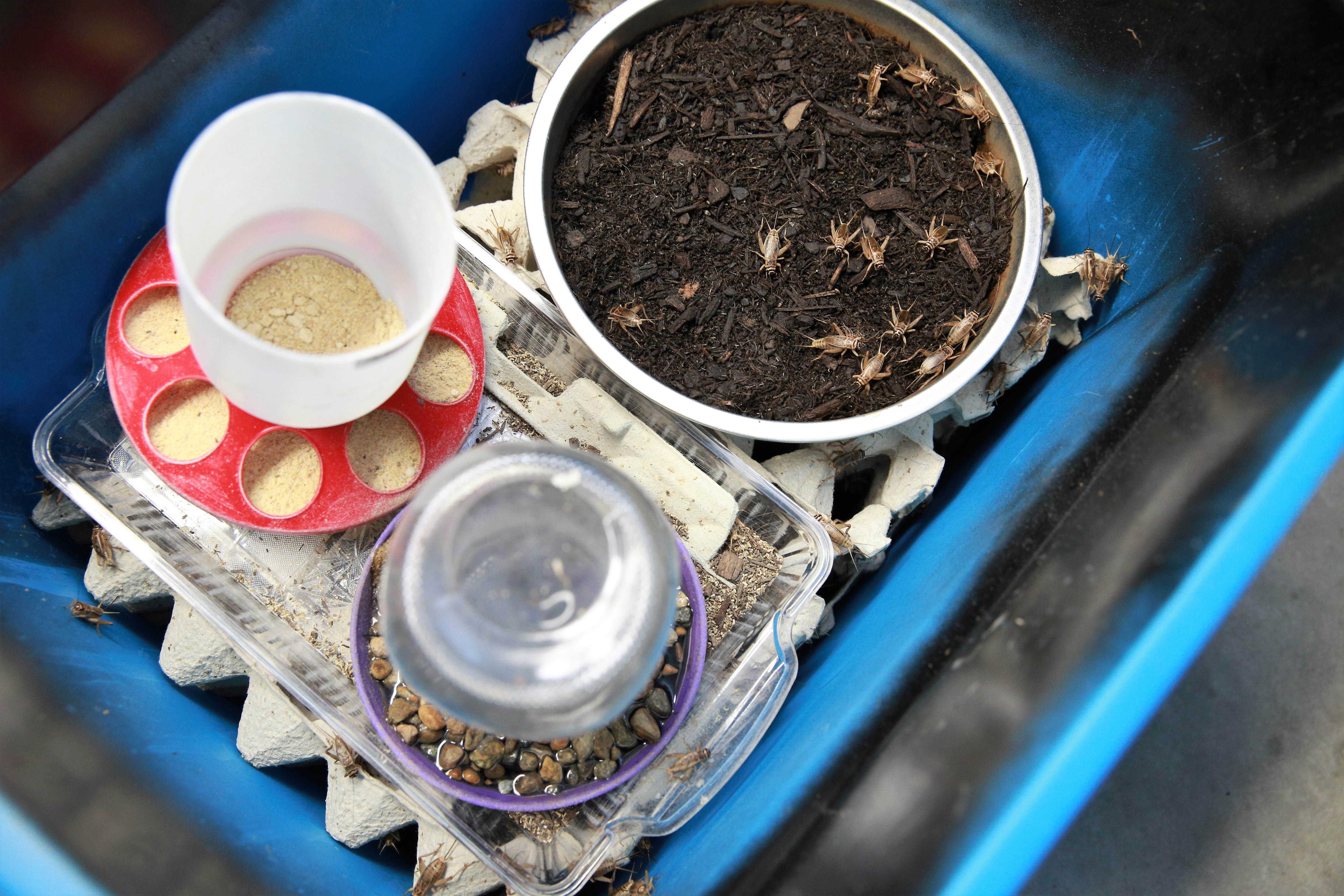 This week, entrepreneur and Startup Factory cohort member Shelby Smith is caring for 5,000 to 6,000 babies. On Wednesday, they were mostly under 24 hours in age.

Jiminy crickets, that’s a lot of babes. Luckily for Smith, the “pinheads” are just young acheta domesticus — house crickets — and fit very easily into the standard-sized storage totes Smith has modified to host her breeding stock for Gym-N-Eat Crickets, her Ames-based startup selling cricket protein products. In fact, that one tote bin is just a portion of the 58-bin breeding and roasting operation Smith has developed in a year on her family farm.

On Wednesday, Smith took the next step of expanding her business when an old, full-sized mobile home was delivered to her family’s farm. Smith, her father and the farm’s full-time employee will renovate the unit into a self-contained cricket factory, enabling Smith to expand her current population beyond the 300 square feet she currently operates in. The mobile unit also gives her some flexibility in her expansion.

“As I’m still evolving my practices, as the industry is still moving forward — there’s such a rapid learning curve happening right now, so I’m hesitant to put a permanent structure up when a mobile one is an option,” she said.

Crickets are particular critters to raise: They need the environment to be between 80 and 90 degrees and high humidity to survive, and even higher when they’ve just hatched. They don’t like sudden movement, or light, or noises, which means that when Smith removed a tote from the shelves of her main production room for photographs, the tote bin residents were aggravated.

“Remember, you ate one of these,” Smith cheerfully said after this reporter jumped back. (Insider Notebook: It’s true, and the dry-roasted cricket sample was pretty good.)

It takes Smith about two hours to complete caretaker chores, but even in the frozen Iowa winter, there is no off-season.

“It’s not necessarily something like traditional pork farming or something like that, where you have a turnover, you have some downtime where everything needs to be cleaned out,” Smith said.

Smith has a background as a basketball player at Saint Joseph’s University in Philadelphia, with a bachelor’s degree in finance. She moved abroad to join the nonprofit Sport Changes Life in Ireland, received a master’s degree in finance, then spent a few years at the trading desk in the National Bank of Canada.

It wasn’t satisfying for her, so she came home to Iowa in 2017 to farm with her parents. Her father urged her to find her own niche agricultural market — and after hearing three podcasts on the nutritional value of crickets in December, Smith bought her first population for $140 in January 2018.

“Everything I read said the supply of crickets for human consumption couldn’t keep up with demand,” she said.

To start, Smith thought she’d raise crickets for already-existing companies, but she couldn’t get anyone to engage in discussions.

“I thought, ‘Fine. I need to get some cash flow, so what if I make my own products, and I can sell them at the local farmer’s market,’ ” she said.

Smith sold out of all the crickets she harvested in 2018, despite the trial-and-error it took learning to raise them. Now, she either packages the crickets as-is, or incorporates them into high-protein cricket flour or whole-food protein bars. Cricket-based protein bars are free of seven of the eight major allergens, but those with a shellfish allergy may potentially react to crickets themselves, she said.

If the mobile home renovation works as anticipated for Smith, she already has contacts from people interested in setting up their own cricket farm to be a supplier for Gym-N-Eat Crickets.

In the next year, Smith aims to get Gym-N-Eat Crickets products in the commercial grocery game. She isn’t the first cricket farmer in Iowa, and she credits earlier farmers for helping state regulators become comfortable with the nontraditional ag product.

“They’re very positive about crickets, which is great. Not everybody has that luxury, not every state has had someone who’s already fought those battles for them,” Smith said.