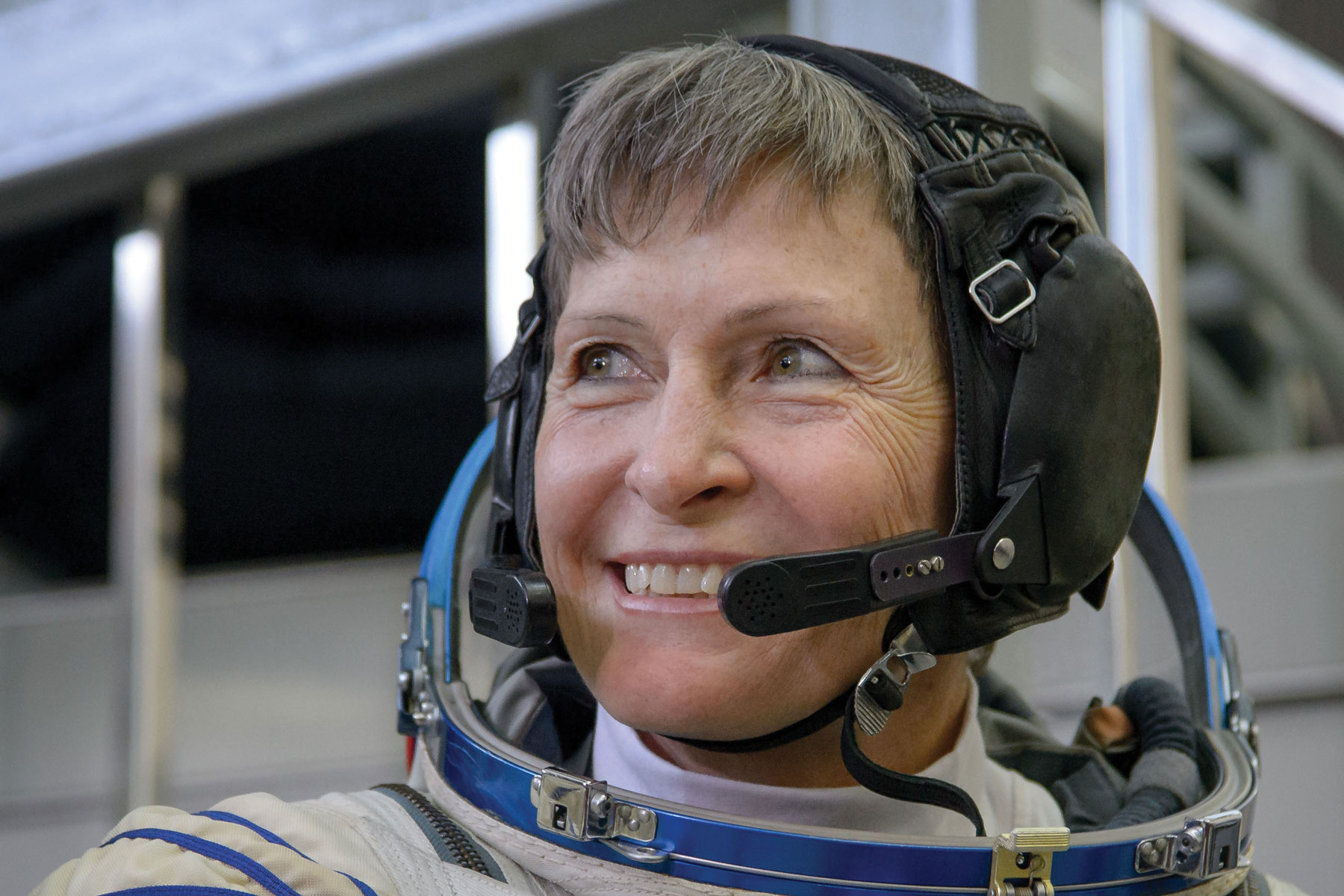 Retired astronaut and native Iowan Peggy Whitson makes sure students and adults know the upside — way up, in her case — of working in science, technology, engineering and mathematics, or STEM fields.

It’s a message she carries now that she spends her time Earth-bound, speaking at events with a mission to engage students in these fields.

Many parts of the country, including Iowa, are fighting shortages of those workers. The state of Iowa and groups such as the Technology Association of Iowa and the Greater Des Moines Partnership have pursued programs to try to encourage students to stay the course on science through the middle school years that seem to send girls in particular off to try other disciplines. Often, peer pressures suggest that girls don’t belong in these fields. Whitson’s career is a powerful testimony that they do.

“The thing I’m trying to convey when I’m out talking to groups is that scientists are cool,” Whitson said. “We really do some neat stuff. I want young people to think science is cool, engineering is cool, so that they can overcome that peer pressure. In my opinion, right now the peer pressure in the social media is what makes them think they should all be Kim Kardashian.

“My message to students in general is you have to find your passion and work really hard for it because nobody is going to actually offer it to you on a platter to give you your dream job,” she said. “You’re going to have to work for it. And then you really can make amazing things happen.

Whitson said innovation is fueled by having diverse crews in the labs, at Mission Control and in space.

“As far as innovation, I think people need to be inclusive of new and different ideas and perspectives,” she said. “One of the strengths of the astronaut office was that we had so many different scientists and engineers and military operators from all different fields, that we could think about a problem from all our different perspectives and come up with better solutions.

“Because of that inclusivity and willingness to think a little bit differently than maybe you had before, someone else might have an idea that will spur something else in you. You just have to keep an open mind to having new ideas and to challenge yourself to think a little more outside the box.”

Whitson’s career followed the Apollo years in which images and videos were of a predominantly white and male NASA. She was inspired by Sally Ride, the first female astronaut, who signed up while Whitson was in high school. Ride was the first American woman to travel in space in 1983.

At that point, Whitson was not even dreaming that one day she would spend months in space shuttles and the International Space Station. Or that she would spend more time in space — 665 days — than any other U.S. astronaut, male or female. (She ranks eighth worldwide in what the industry calls the “all-time space endurance list.”) Or that she would walk in space 10 times to work on the space station and conduct experiments.

“I think I was very much influenced by the fact that when I graduated from high school, that was the year they picked the first female astronaut,” Whitson said. “That really made an impression on me, and it made me feel it’s profitable for me, too. Having diverse people come and present to students and show them opportunities will help them envision themselves there and [show they are] able to take on the challenge. There will be some students who won’t need that motivation or justification. But I definitely think it helps when young people see people of their kind doing the things they might dream of. It at least opens their eyes that the world might be slightly bigger than they had imagined. That exposure to me is really important to young people — getting them to see all the different fields that are out there and choices that can be made.”

Whitson saw the changes in the overall NASA staff’s gender and racial diversity as her career unfolded. “When I first started at NASA, before I was an astronaut, I was in a lot of meetings where I was the only woman. Over the course of the time I was there — almost 30 years — that changed dramatically. Women from all different fields and diversity in terms of race [were visible], and NASA has been pretty good at valuing people for what they can bring to the table.

“I don’t think every place is perfect, but I think NASA has done a great job trying to really push the boundaries on that. You need to promote these kinds of fields — in NASA’s case, science and engineering and math — at much younger and younger ages. One of NASA’s biggest missions is to stimulate young people to want to do science, engineering and math. And then you have a workforce that is much more diverse in the future.

“I try to let people know that if you have an interest in something, it’s worth pursuing. It’s important to expose students to as many fields as you can. In one of those, they might find their passion that will help drive them in their future,” Whitson said.

Whitson has been doing public speaking and working as a consultant since her retirement on June 15, 2018. “It’s a new era for Peggy,” she said with a laugh. “I don’t know exactly where it is going to end up.”

Speaking of the unknown, Whitson had plenty of times in space when she and her colleagues had to innovate their way around problems.

She recalled one as a particularly good example.

“One of the best examples of that was when the shuttle was docked to the space station, we had repositioned a solar array on a permanent location and as we were re-deploying it, we tore the solar array,” Whitson recalled. “The solar arrays are 115 feet long and they are paper thin. The tear ended up being five or six feet long.”

The fix took some work.

“It was a team effort. It was a lot of folks on the ground who did the initial thought process to figure out how to do this repair. We were on board the station and had to implement that fix, which ended up being very simple. It was a wire cufflink solution. I built the cufflink. A crew member did the spacewalk. We had to use a shuttle arm extension to do the inspection in a way that it had never been used before. But it is still working and it’s reflecting like 90 percent power to this day. It was critical because the next space shuttle was to bring up another module and we needed the power. [The damage was to one side of a pair of arrays; there were three pairs on the station typically.]

Whitson laughed at the memory. “I think it’s kind of cool. My dad always said you can fix almost anything with No. 9 wire and pliers. He was a farmer. We used duct tape up there all the time.”

With a career spanning decades, Whitson saw a lot of advancements in equipment and technologies.

“Over the years, we developed a way to recycle our own water. We had a urine-processing system and a water processing system that makes the water drinkable. We are up to about 85 percent recycling of all waters — our sweat, the condensation of our breath and our urine. If we want to do missions to Mars, we really need to be more like 95 or 100 percent efficient. This year they are going to send up a new device with a brine processor to try to get more water out, which we’ll need to do really long exploration mission away from planet Earth. It’s always a continuous process as far as innovation.

“When you think about the space station having been up there for 20 years, everything has changed. We have learned a lot. We’ve modified hardware. Things have not worked necessarily the way we wanted them to the first time around, so we’ve had to do this continuous process of replacing parts or in some cases adding new parts. Our original carbon dioxide removal system would plug up fans. Over the years we changed that whole system and by processing in different ways. You have to learn from your mistakes.Whitson spent 665 days in space, the most for any U.S. astronaut, primarily in three stints on the International Space Station. (The record is 878 days by a Soviet/Russian cosmonaut.) Her ten spacewalks spanned 39 hours, 46 minutes. She was the first female, nonmilitary chief of the astronaut office, and the first female commander on the space station.

Whitson spent 665 days in space, the most for any U.S. astronaut, primarily in three stints on the International Space Station. (The record is 878 days by a Soviet/Russian cosmonaut.) Her ten spacewalks spanned 39 hours, 46 minutes. She was the first female, nonmilitary chief of the astronaut office, and the first female commander on the space station.

Fixing mistakes isn’t the only thing that’s important, Whitson said. She wants you to be sure you put yourself in a position to make mistakes. ”Part of innovation is you have to challenge yourself to make mistakes to figure out, ‘OK, that was a mistake and here’s why. And here’s how we can fix it.’ Don’t take a setback as a reason to not try and do better or do more the next time. Take it as a learning experience and figure out what the problem was and how you may need to change your approach to be successful in the future.”

For all her thoughts about changing systems to turn more urine into drinking water, Whitson seems to have some doubts about sending astronauts to Mars.

“One thing we learned on the longer trips on the space station is that things you weren’t planning on breaking were causing you problems. We need to have ways to test things out and make sure we know what we’re doing when we go on those longer duration missions to places that are much farther away,” she said.

PRAISE FROM A NASA VETERAN

“I believe Peggy Whitson’s biggest impact has been and will be on young people, girls and boys. Over many missions into space, she showed that you don’t have to be a test pilot to be a key player in human spaceflight. Peggy was very successful during her space missions, but she also excelled on Earth. As a NASA scientist and head of the astronaut office, Peggy showed that she had it all.”

If NASA comes up with answers and wants to bring Whitson out of retirement for a Mars trip, she’s game.

“I would love to go, but there are going to be lots of challenges. Getting there faster would be an ideal solution to try to reduce exposure to radiation, which is kind of a big deal. Being able to build structures using materials from Mars and maybe test them on the moon to see how we can process materials so they can provide radiation shielding is important. Can we process water that’s already there? Things like that. We’re going to have to be very, very innovative and think of new ways of doing things when we go to Mars.”

For now, her innovation is centered on what to do next in a life that has broken barriers and shattered records as a matter of course.