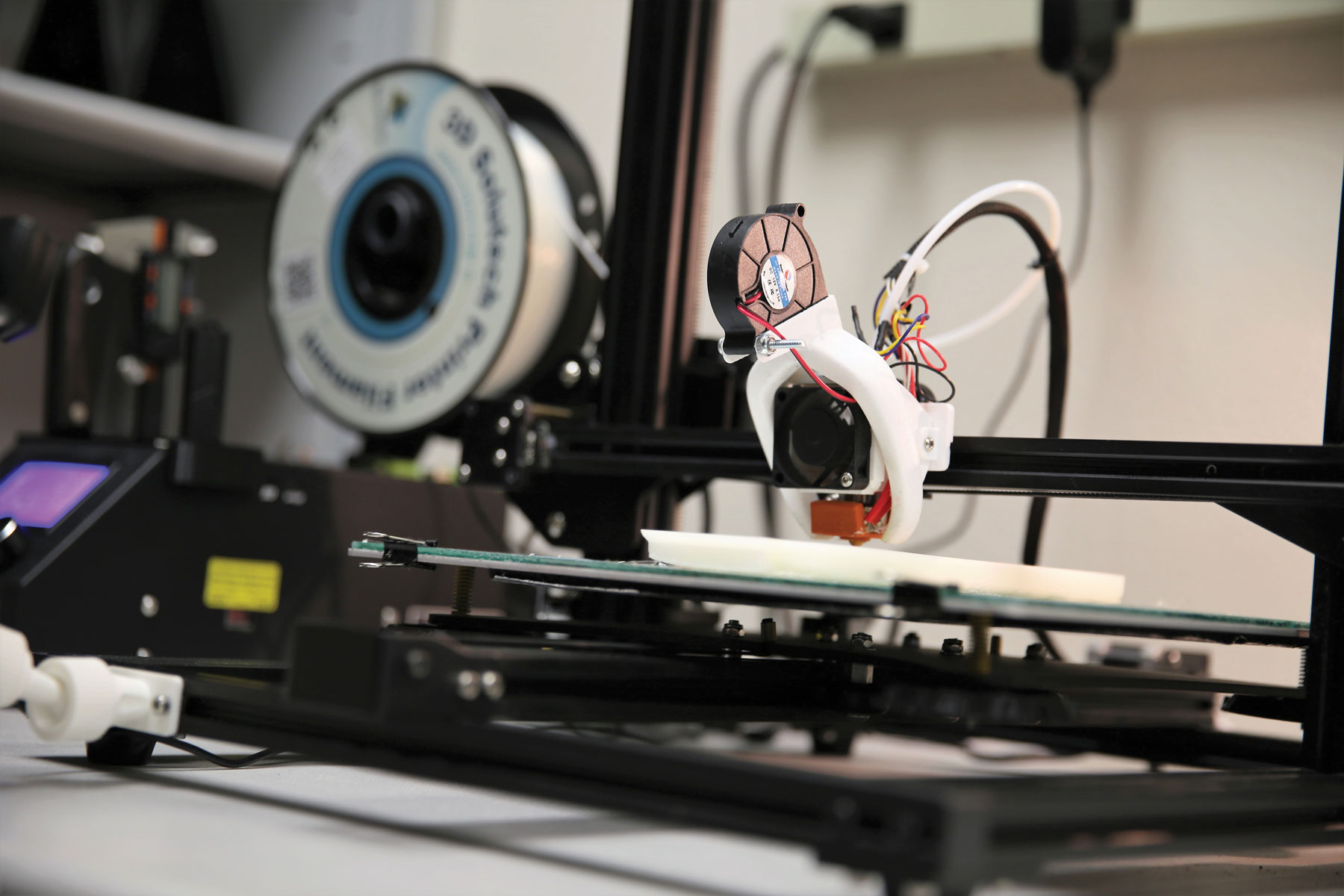 University of Iowa students change the rules for amputees

What would you have done in college with a machine that could print nearly anything you wanted?

University of Iowa students Cody Wilson and Dylan Ray started the 2018-19 school year with just that question. The engineering students had access to a small basement lab in a converted maintenance closet, crammed with a couple of desks, whiteboards, file cabinets and four 3D printers.

“We wanted to figure out something that would be not only cutting-edge technology, but [would] help the world as well,” Wilson said.

That’s when they found a previous 3D print project online: creating children’s prosthetics at a reduced cost. Working through the international organization e-NABLE.org, Wilson, Ray and the rest of their colleagues at the UI 3D Printing Club, founded in fall of 2018, began the certification process to alter and print plastic prostheses for kids as young as 1. The club works mostly with PLA (polylactic acid) plastic, which offers durability while being moderately priced.

“We have a couple of biomedical engineers who just recently joined the club. However, before we started all of this, we actually all sat down in one room and said, ‘This is what we’re going to do.’ We just did as much research as we possibly could, and learned as much as we possibly could,” said Wilson, who is club president and a junior.

An arm and a leg

Two million amputees in America pay between $5,000 and $50,000 out of pocket each time they buy a new prosthetic limb, according to the Jordan Thomas Foundation, which raises funds to buy prostheses for child amputees. For an 8-year-old child whose prosthetic costs $3,500, purchasing a prosthetic six times can add up to $21,000 by the age of 18.

After reaching adulthood, amputees will still need to replace their prosthesis if the amputee gains or loses significant weight, or if the materials have been significantly manipulated or broken, according to the Amputee Coalition, a national nonprofit resource for American amputees.

Some nonprofits such as e-NABLE are tapping 3D printing enthusiasts who can reliably fulfill the need for families in the U.S.

E-NABLE builds a network of volunteers who create free, open-source code for 3D-printed prosthetics, and certifies those volunteers to print and assemble the prosthetics for children in need. After the UI 3D Printing Club was approved, e-NABLE matched the group with Isaac, a 1-year-old boy living in San Antonio, who needed a prosthetic from hand to elbow.

“We’re starting on a model that will be form-fit for his amputation. Obviously, adjustments to the model itself to really fit the patient, and Isaac’s a special case, because he’s still very young,” said Ray, a junior and club vice president.

When UI senior Erica Cole reached out to the UI 3D printing club, she was already wearing a $22,000 below-knee daily prosthetic.

In her second-semester class schedule, Cole wanted to sign up for scuba diving classes, but she had a specific concern: She cannot get her prosthetic wet. Luckily, her scuba instructor is a parent of a UI student – Wilson – who was already exploring 3D prosthesis design.

“The current one can’t get wet – at all,” Cole said. “Even if it could, it’s locked at a 90-degree angle … so if you were to put a fin on that and swim in it, your fin is going to go up and down in the water. It’s just going to add weight to you, it’s not going to propel you at all.

“The challenge is turning that 90-degree angle into something like 70 degrees, so that you’re actually propelling yourself when you’re kicking,” Cole said.

There are other challenges.

“Let’s say she really enjoys scuba diving and goes to a tropical place, and the ocean has salt water. We know as engineers salt water is probably the worst possible thing you can do to metal,” Wilson said.

That’s a scenario where plastic can thrive. The project team, led by junior Phil Storto, used Cole’s existing prosthetic to create a 3D scan, then made prototyping adjustments in modeling software to create more of a “fin.” The total cost of materials for the final prosthetic is estimated at $75, with free labor from the UI 3D Printing Club.

“The advantage of this project is very specialized, where you’re not going to have to walk more than 13 to 20 feet at a time on the surface,” said sophomore Jack Buchanan. “We can really just focus and dive into how it will behave underwater. At least for us, it eliminates a lot of things to consider.”

They worked to get Cole using a functional wet prosthetic as fast as possible: The team built a prototype model using an average flagpole holder purchased at a hardware store. By the end of the prototyping process, Wilson estimated the cost of the prosthetic’s plastic will be $15.

“We’re trying our best to get an initial model that would be strictly functional, so we can get a flipper attached and allow natural motion,” Wilson said. “We’re learning as we go with this. … With our next iteration, we’ll have a bit more time to print and design, so we’ll be doing a full [3D-printed] prosthetic.

“One of the main draws of 3D printing is prototyping with ease,” he added.

Cole took her first scuba class without any prosthetic, and planned to spend the next couple of classes testing the prototype and passing on feedback to the 3D Printing Club as they worked out a final model.

“Hopefully, we see a really big difference in performance. We basically want to just make sure that the only thing she has to worry about is having fun, because that’s all she should worry about,” Wilson said.

Working with two distinct client cases – a young child’s all-purpose prosthetic hand and a young woman’s tailored-for-scuba prosthetic leg – tell Wilson how versatile 3D can be when solving these issues.

“Pretty much anyone can do maintenance on this model and not have to go to a specialist, go to the hospital to have it looked at,” Wilson said. “It makes it more of an ideal situation for people who may not have the resources to get a high-end prosthetic.”

“I hadn’t even gone swimming since I lost my leg, so I wasn’t sure what the limitations were going to be. I knew it was going to be a challenge,” Cole said. “But being able to have something that will bring me up to speed so I can keep up with everybody else is really special.”

Once her scuba prosthetic is finished, she has another idea for the team – a ballroom-dancing prosthetic.

“It feels like it’s opening up a lot of different opportunities and doors, because with this kind of technology, the limitations I would have faced even 10 years ago are suddenly not limitations anymore,” Cole said.

Members of the 3D printing club are resourceful. They’ve been able to self-supply some of their needs: In the lab, two 3D-printed pieces store spools of plastic on top of the team’s larger printer. The club is raising money from UI students by offering 3D printing services to create phone cases, 3D-printed lithographs and other objects.

Learning to “corral 40 students” efficiently in a club has some management benefits, too.

“We’re actually learning how to become bosses just through trying it,” Ray said. “We’re able to take on roles that we probably wouldn’t have [without] the club. … And we’re actually getting some really good practice at that.”

“You need to know how to swap out a tool that prints plastic with various other materials,” Nge said. “At the end of the day, these are just tools so that we can maybe come up with a more creative way to facilitate something, a product that can help someone.”

Club members have also worked on animal prosthetics and restoration infrastructure for Australia’s Great Barrier Reef as the natural coral reef decays under climate change stress. The group is keeping an eye on chances to work with industrial-scale 3D printers – the kind of machines that can handle a heavy production schedule. For now, prototypes and one-off creations remain the focus while the club waits for orders of bigger printers to be delivered.

“This club … opened my eyes to what’s out there,” Nge said. “Design mechanical engineers, we design parts, but rarely [do] we get to hold it in our hands.

“Coming in here, I can be creative and get my projects done, and learn so much from it. And because of the knowledge I’ve gained from the club, I was able to know what needs solving in this industry,” he added.