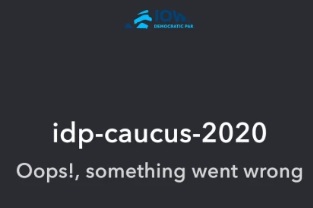 What happened with the 2020 caucus IowaReporterApp?

Screenshot of the IowaReporterApp, developed by Shadow Inc., by Motherboard.

To be clear: this briefing, in a state technology and innovation e-newsletter, does not explore whether an app is solely to blame for political chaos immediately after the 2020 Iowa caucus for the Democratic presidential nominee.

But the IowaReporterApp, developed by a for-profit company called Shadow, Inc., is playing a prominent role in the emerging narrative. Here’s a look at one precinct chair’s experience, and the emerging picture behind the app and Shadow Inc.

App on the ground

In Floyd County, the reporting app’s problems extended the night for Stewart Dalton, precinct chair for Charles City Precinct 2. Dalton, a three-year precinct chair veteran for the state Democrats, first heard from the Iowa Democratic Party (IDP) about the app during a meeting on Jan. 16, despite a November 2019 caucus training workshop he attended. At the time of the January meeting, Dalton didn’t even receive the app’s name from the IDP.

Motherboard, which was able to successfully download the IowaReporterApp on one phone, reports that the first test invite was sent to a Lone Tree precinct chair by a Shadow Inc. email address on Jan. 18. Invites were apparently sent through mobile testing platforms, rather than official app stores.

Dalton attempted to download the app a day before Monday’s caucuses on his Android phone when he received a download warning on the phone.

“I got an email shortly afterwards … from the Democratic party, and they said they were having problems and to try [downloading] later while they get the bugs out,” Dalton said. “We didn’t even bother after that.”

After the caucus wrapped at about 8 p.m., Dalton called the IDP twice due to a dropped phone line, then received a call from the party at 11:40 p.m. informing him results were not received; Dalton referred the party to another precinct volunteer who kept the paper records.

Dalton and other precinct chairs have navigated a new app rollout under the state party before, during the 2016 caucus using a Microsoft-built app given to the Republican and Democratic parties for free. That year, Dalton purchased a tablet at Best Buy to be compatible with the app, but after attempting to use the tablet and a volunteer’s iPhone, the precinct ended up calling in results over the phone line.

“You either have to go more low-tech, or get something that works,” he said.

Shadow is stumbling hard in the aftermath, both in reports examining the tech firm’s origin through veteran Democratic campaign staffers, and in internet memes capitalizing on the company.

In Nevada, state Democrats abruptly terminated a planned roll out of two separate caucus apps also developed by Shadow, reports the Nevada Independent: an early voting app, which was intended for download on more than 1,000 party-purchased iPads for select locations, and a precinct captain app, which would transmit final results of Nevada’s caucuses to the state party.

For its part, Shadow has apologized on Twitter and online. “As the Iowa Democratic Party has confirmed, the underlying data and collection process via Shadow’s mobile caucus app was sound and accurate, but our process to transmit that caucus results data generated via the app to the IDP was not,” the company said in the statement. “We will apply the lessons learned in the future, and have already corrected the underlying technology issue.”

Shadow CEO Gerard Niemira, a former staff member on the 2016 Hillary Clinton campaign, also apologized in an interview with Bloomberg after locking his personal Twitter account from the public. A Daybook job listing by Shadow for a ‘client success representative’ was roundly panned on Twitter after it went live on Feb. 4.

Should tech be in caucuses? Opinion pieces abound:

No, a blockchain wouldn’t have prevented the Iowa caucus debacle, writes Adam Levine at Coindesk.