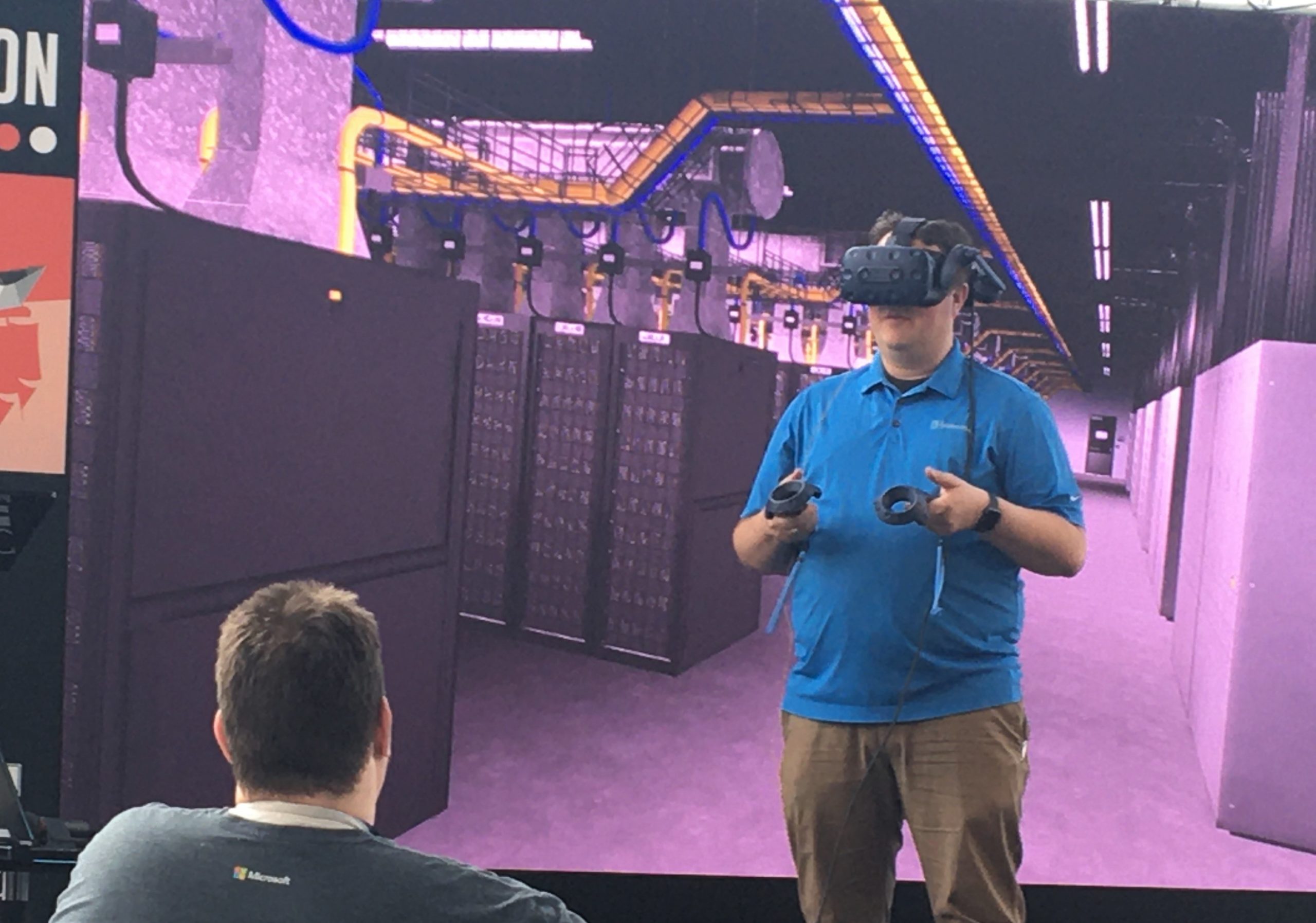 Data centers in Iowa are a career opportunity for students in DMACC West Des Moines’ network technology program. As a part of the Microsoft Datacenter Learning Academy, students have a chance to get their hands dirty on real technology in need of real repairs. That’s when things get messy.

“When we teach our students how to fix this stuff, they frequently blow it up,” said Anthony Paustian, provost of Des Moines Area Community College’s West Des Moines campus.

That gets expensive. So DMACC turned to Studio Iowa to develop the Virtual Learning Lab, a virtual reality data center simulator that will let students mess up a server — and try again.

The training simulator expands capabilities for the Microsoft Datacenter Learning Academy, which initially opened in 2018.

“We have three data centers in the metro. Microsoft is not worried about graduates coming to work for them, they just want to lift the entire workforce up because all the data centers use the same basic hardware,” Paustian said.

Right after opening, Paustian and network technology program chair Jay Nickelsen knew they would have a problem teaching scale in the limited floor space at the West Des Moines campus.

Meanwhile, data centers in Central Iowa can be massive: Representatives at Facebook Altoona recently told the Business Record that buildings on its campus cover a combined 2.5 million square feet.

“Although we could teach the equipment specifics — how to pull a server out of a rack, how to replace the hard drive or damaged components … we can’t teach how somebody can navigate these giant data centers or go through all the procedures,” Paustian said.

Studio Iowa partners Ryan Tow and Shawn FitzGerald took key points of curriculum out of conversations with Nickelsen and toured one of the data centers in Central Iowa to build an understanding of what students needed to experience through the virtual floor plan. Designers kept the controls as simple as possible so students were focused on the task at hand, rather than learning VR headset controls, Tow said.

“There’s no substitute for the real world, so we’re trying to give them a corollary to that, so when they [try it] in VR and then get to the real world, it’s familiar,” Tow said. “We see this as not a replacement for real-world training, but it gets you familiar enough so that the first time you touch it, it’s familiar.”

Microsoft awarded a $30,000 grant for the first phase of the VLL design, and DMACC is applying for another $25,000 grant to expand the simulator’s capabilities, which currently introduce students to navigating security protocols and basic repair actions. DMACC will keep multiple headsets and controllers on campus for students to use in teams during different points of training in the academy.

Paustian sees the program as another recruiting tool for students who haven’t considered IT career opportunities: While the program serves about 60 students right now, companies have told DMACC they need three times the number of students to be taking this training, Paustian said.

“[Microsoft] wants to take this technology we’ve been developing and have it used at all their data center academies across the country,” Paustian said. “Twenty years ago, we were the first college campus to be all wireless. … This is getting us back to that whole development mindset we built as a campus.”

Over the last two years, Studio Iowa already built portfolio of extended reality projects designed for customer training — the firm has created a VR farm for an out-of-state agriculture cooperative, and programs teaching a sales team how their manufacturing employer assembles and disassembles a hydraulic pump. The experience shifted Studio Iowa’s perspective from being a traditional video production company, Tow said.

“Those are the kinds of things we see successes with — being able to help understand those difficult concepts to grasp,” Tow said. “Going down this path towards VR, towards other technical applications has caused us to rethink how we talk about our business. … We need to be able to call ourselves story-focused and layer in the technology later.”