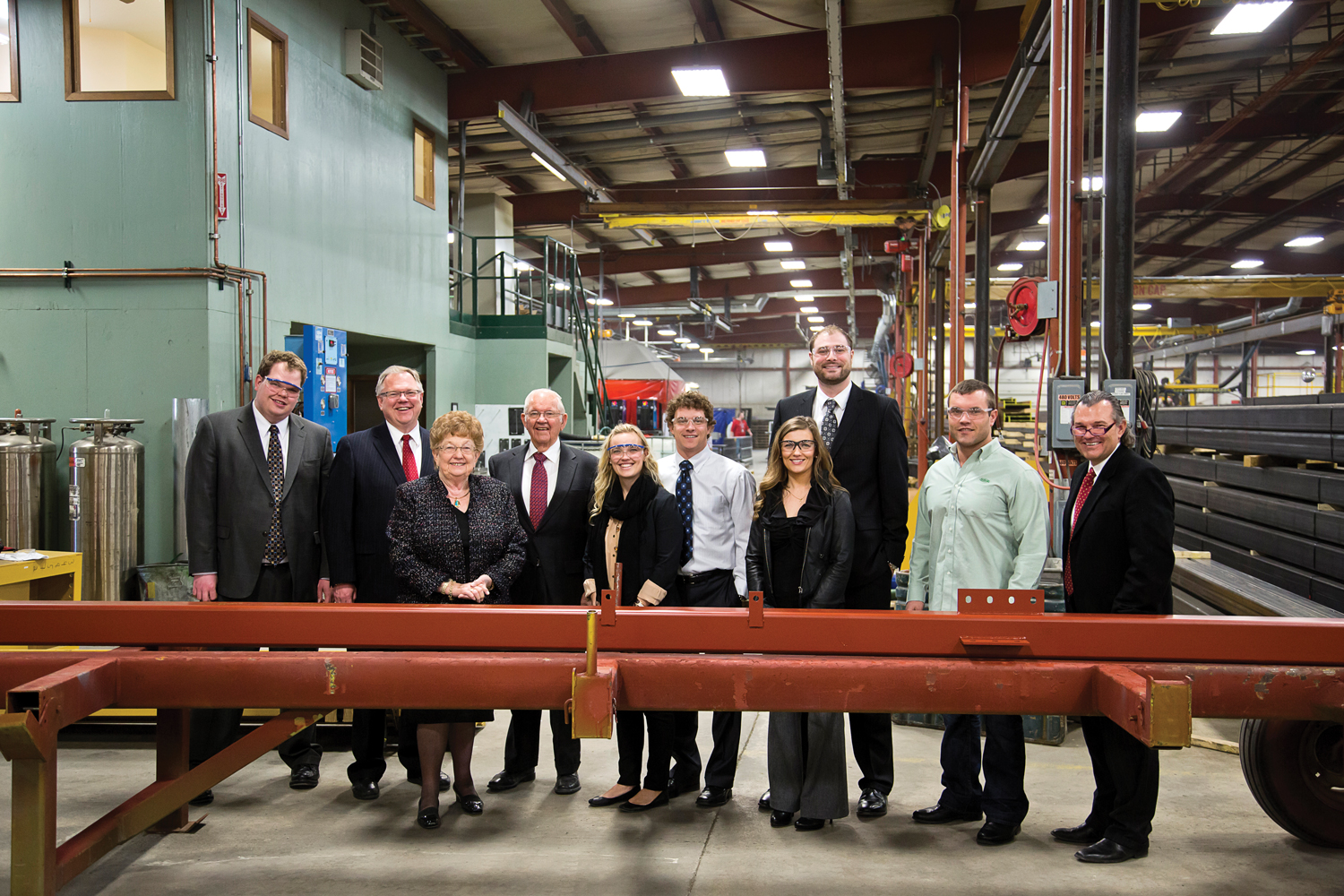 Innovation Pioneer: Family-owned Sukup Manufacturing has ‘bloomed where it was planted’

The growth of Iowa-based Sukup Manufacturing Co. has always been tied to farmers and the land, and ever-increasing crop yields over the past couple of decades have fueled rising demand for grain handling and storage products. That need — and the imperative for innovation — has driven the growth of the family-owned company that’s now firmly planted in its third generation.

When he was a young farmer in 1962, Eugene Sukup bought his first grain bin to dry and store shelled corn. However, he found drying to be slow, and pockets of grain began to overheat and spoil. To solve this problem, he modified a stoker auger from a coal furnace and inserted it in an electric drill. Then, using a chain, he hung it from the top of the bin to loosen the hot spots and prevent spoilage.

Sukup began making the stirring augers at a welding shop in Sheffield. He sold five units to a local bin dealer for $29 each; but when he went back to check on them, he found that only three had sold and one had been returned. Rethinking the design, he developed a way for the device to stir automatically, which led to his first patent for the Stirway stirring machine. He and his wife, Mary, founded Sukup Manufacturing in 1963.

The company now markets itself as the world’s largest family-owned and -operated manufacturer of grain storage, grain drying and handling equipment, and steel buildings. Sukup Manufacturing currently has about 600 employees, and with its headquarters, plant and distribution centers operates in more than 1 million square feet of office, manufacturing and warehouse space.

“As a family company, we’ve kind of bloomed where we were planted,” said Charles Sukup, Eugene’s oldest son and the company’s chairman. “Our philosophy is that we aspire to be family-owned and -operated, and we are committed to professional management.”

A significant milestone for Sukup Manufacturing came in 2000, when the company moved into the production of grain bins and affordable grain drying systems. Largely because of those moves, since 2000 the company has grown eightfold in sales, and 80% of the products that it now produces have been developed over the past two decades, said Steve Sukup.

“In the late 1990s, we were really focused on in-bin drying — so you put the grain in there and dry it in the bin,” Steve Sukup said. “And you can do that for maybe 300 bushels an hour. But most of our customers [with their larger combines] wanted to dry 1,000 to 2,000 bushels per hour, and our in-bin drying couldn’t keep up. So I went out with one of our other engineers to figure out [how to improve] ‘affordable drying systems,’ and how do we match up to our customers’ needs?

“Anytime we look at a new product, we say, how can we make it better? With affordable dryers, we got a patent on it, and we increased the efficiency of the dryers. And from there, we started to control our own destiny by going into grain bins,” Sukup said. “Some in the group were a little concerned about going into grain bins, but that’s what everybody asked for — they wanted to talk to the guy that makes the grain bins.”

Late last year, Sukup Manufacturing achieved ISO 9001 certification, an international standard for quality management systems. The certification helps companies get on preferred supplier lists, and is often a requirement when seeking new customers, especially when bidding for work with larger organizations or the public sector.

“The company was founded on farmers and has been known as a mom-and-pop type of a brand,” said Schmitt, who joined the company in 2010. “But since coming to Sukup I’ve noticed a lot more initiatives and strategy for entering into the commercial marketplace. And once we get those big commercial players to come to the plant, you can see the look on their faces change, like, ‘Oh, these guys are serious; this is a big operation and they can knock out these big projects.’ ”

The longest-tenured third-generation family member, Matt Koch, started working for the company 13 years ago, after graduating from Iowa State University with an electrical engineering degree. His vision is to position Sukup Manufacturing as a technology company.

“In our industry, about 70% of our product line is more or less commodity-type products such as material handling equipment and steel buildings. You can buy fans and heaters and bins from anybody, so it’s really important that we concentrate on the things that make us different, make us better. We focus on our intellectual property; we focus on automation.

“So my vision for the company has always been: How can we make people very easily see the differences that make us better, without having to explain it?” he said. “And we’re experiencing that with our dryer product line. I’m hoping that we can automate the rest of our product lines so when people think of us, they actually think of us as a tech company first, as opposed to a commodity-style supplier to the industry.”

The company has received more than 100 patents in its 57-year history.

“A lot of our features come directly from feedback from dealers,” Koch said. “With the culture we have from the inside with a lot of farmers who have worked for us, that ag background has always been incorporated in our designs.”

“My father-in-law [Steve Sukup] likes to say something to the effect that ‘We buy 90% of our problems, so why don’t we just do it ourselves instead?’ That’s just always been our mentality.”