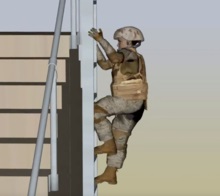 Digital soldier model Sophia climbs a ladder while encumbered by personal protective equipment. Sophia and her male digital model counterpart, Santos, are part of a yearslong initiative by University of Iowa researchers to design digital human models who can predict behavior based on human physiology.

After 15 years of work, digital avatars are finally maturing to a place where researchers can “design a human” to test protective equipment for military personnel, University of Iowa researchers said Wednesday.

Through the GruntSim platform built by ITI, Santos and Sophia assist researchers in studying human performance, survivability and joint stress while wearing combat gear in war-fighting scenarios. The University of Iowa provides the software to other academic institutions cost-free to use, and is finalizing licensing to provide a free version of the software to government agencies, Malek said during Wednesday’s event.

“It’s a true human simulator,” he said. “It is millions of lines of code now. … Using deep learning, using a lot of tools within the [artificial intelligence] system has enabled us to do quite a bit more just in the past two or three years.”

The two physics-based models are designed to predict human behavior based on physiological inputs such as weight, body type, fatigue and hydration levels. Once a Santos or Sophia model is designed, ITI can simulate equipment tests of armor or vehicles, and measure the physical effect on a soldier before physical prototypes are tested with real individuals. Researchers can assign multiple variations of Santos/Sophia models at once to digitally assess equipment on multiple body types, particularly important when assessing properly fitting body armor.

Testing equipment on hundreds of digital human models before physical prototypes are tested could save a significant amount of costs, time and resources for the U.S. military and contractors, Malek said.

“Typically they bring in hundreds of people. It takes quite a bit of time with all the variations, all the load configurations that are different,” Malek said.

The model is also able to predict injury stress on the body and injury mitigation in a soldier, after the ITI spent about seven years to develop models of human anatomy, layered to give researchers a map of how injuries affect a person while wearing the digitally prototyped equipment (link: video of a Santos bullet penetration test).

The software currently does not have enough understanding of computational fluid dynamics to evaluate personal protective equipment assessments for diseases such as COVID-19, but the team is beginning that process, Malek said. Modeling soft armor and fit remains a challenge, as well as simulating a collision between the Santos/Sophia model and blunt objects.

“We’ve done quite a bit of work on trying to predict hits, rays and now using some AI to assess the PPE in terms of coverage and anatomy within — what it hits within the body, what the damage is,” Malek said.

“Is the need for physical testing there? Absolutely, you can’t get away from that. But I do believe that the testing on a virtual digital twin is critical to reduce the costs,” he added.