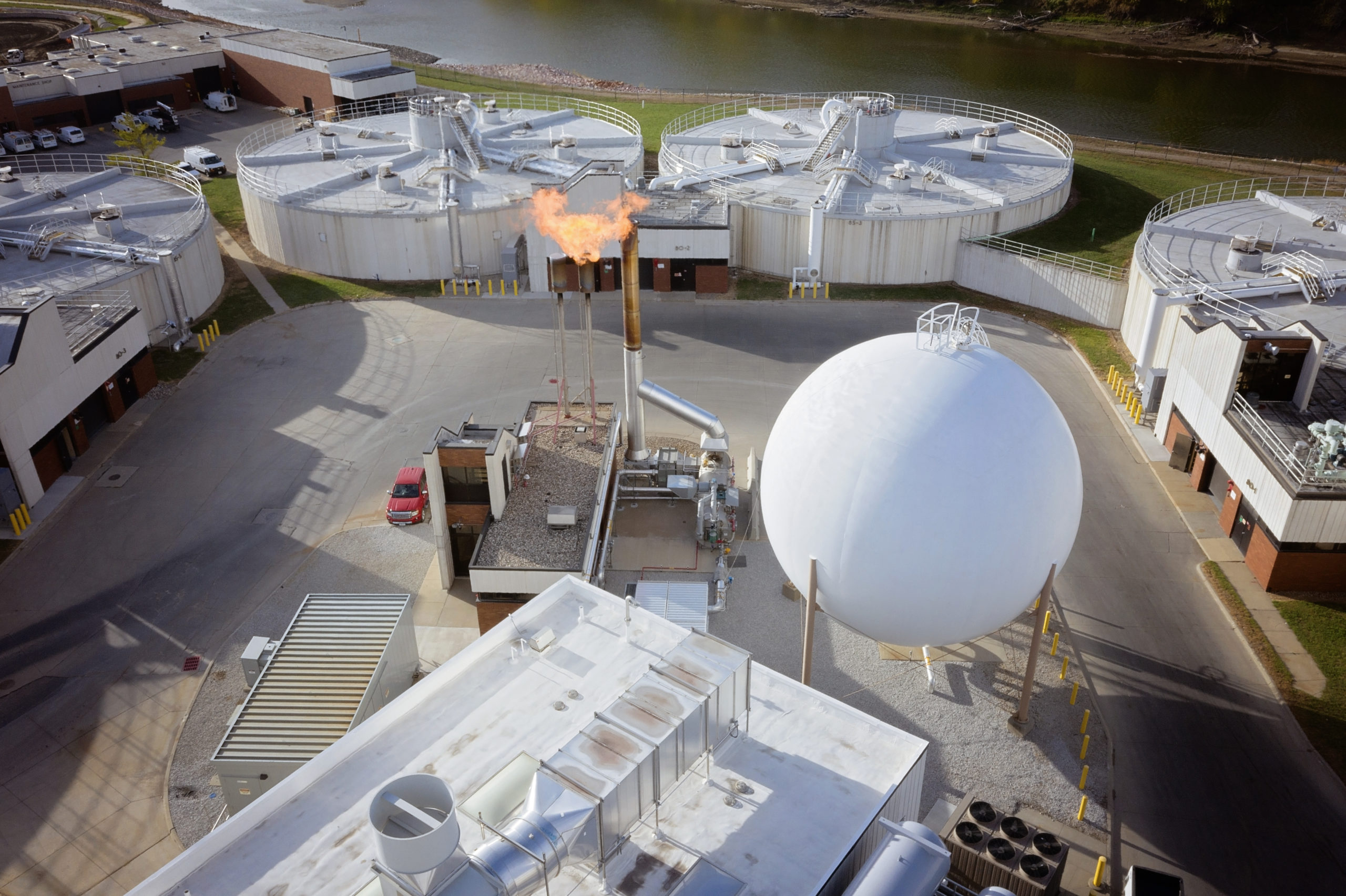 A tower torch with a flame of up to 20 feet high once burned excess methane gas away at WRA facilities. Now after a nearly $20 million upgrade over the last few years, the WRA can convert excess biogas into natural gas for residential and commercial energy.

Once a common sight to drivers nearby, the tower burning waste methane gas at the Des Moines Metropolitan Wastewater Reclamation Authority (WRA) has been retired in favor of a new, renewable natural gas conversion system.

A $20 million project to upgrade facilities is expected to provide around $3 million in annual revenue to offset operation and maintenance costs for the wastewater treatment facility, said Scott Hutchens, Wastewater Reclamation Authority director.

WRA treats wastewater for 17 communities in the metro region, handling an average of 70 million gallons a day. The WRA has always generated methane gas through the treatment process of wastewater, which the facility used internally to generate electricity for the operation.

But the WRA consistently produced more methane gas than it could consume for internal purposes, so the excess gas had to be burned — and drivers who drove down southeast Vandalia Drive, past the WRA grounds, would see that burning in action.

“You’d see a big, huge flame, probably a 15- to 20-foot flame coming out of our torches. That was excess gas we couldn’t do anything with,” Hutchens said. “It’s basically a waste, flaring that gas.”

Since Oct. 15, the upgraded facilities now take that generated methane gas and convert it to usable natural gas that the WRA sells to an off-taker company, which then injects the gas into the Mid-American Energy pipeline destined for residential and commercial energy customers. Through that conversation, WRA sells the biogas’s accompanying environmental energy credits, called RINs, to the off-taker, which tracks how much gas has been traded between the two entities.

“Because it is produced by a wastewater treatment plant, other organizations and their green initiatives will buy these environmental attributes and natural gas at a premium. We can actually get very good revenue sources,” Hutchens said.

“But as we looked at that closer, it didn’t become feasible, and to do a private-public partnership just wasn’t going to work,” Hutchens said.

WRA expects to have the project paid for in four to six years. Facilities produce about 1,400 dekatherms of natural gas a day, which would serve about 5,500 households on a daily basis, Hutchens said.

The WRA is the largest wastewater treatment plant in the state, and only the third entity in Iowa to unveil a similar renewable natural gas project, along with Dubuque and Sioux City.

“We can reduce our carbon footprint and make it a green product, and produce more revenue, which will offset our operations and maintenance costs,” Hutchens said. “We continue at the WRA to try to be environmentally conscious, and try to be innovative with our processes, and reduce our energy needs.”