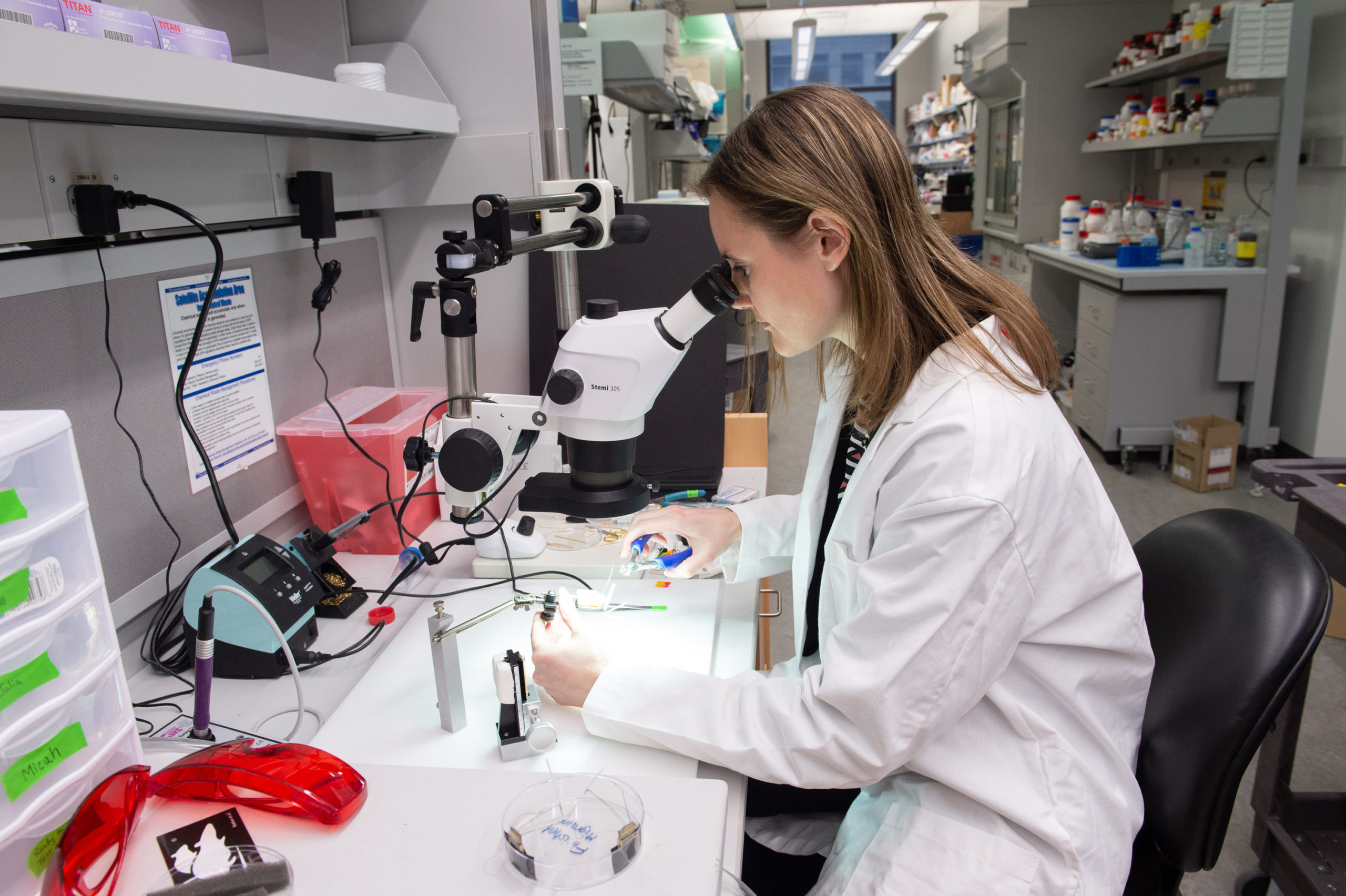 The human brain lives its days in milliseconds.

In 1,000 milliseconds — one second — we may blink or feel our heart beat once. In that same second, our brains send one or more signals from each of about 100 billion neurons to make everything we do possible.

For accuracy’s sake, scientists usually observe the activity of neurons as it happens, millisecond by millisecond. Although the technology that keeps up with the brain’s speed and complexity is inspiring, it does not provide the full picture of how neurons work and connect. But an emerging method is producing more information about the brain than ever before and it stands to change the understanding of complex brain disorders.

Rainbo Hultman, a University of Iowa assistant professor of molecular physiology and biophysics, has developed a research method identifying and investigating the role electrical networks play in features of neurological and psychiatric disorders.

As a postdoctoral fellow at Duke University, Hultman led the study of networks contributing to major depressive disorder in Dr. Kafui Dzirasa’s lab for psychiatric and neuroengineering.

She first earned a doctorate from Duke in biochemistry, but chose an interdisciplinary direction for her postdoctoral experience.

“I really wanted to learn a new technique where I could understand the brain more globally, how different connections will be made there and how that related to behavior. I got my Ph.D. in biochemistry doing more molecular neuroscience, and then I joined the psychiatry department working with Dr. Dzirasa on more systemwide brain questions,” she said.

Her goal to study the brain as a whole system succeeded — she evaluated the connections between seven different brain regions, the most regions ever studied at once.

Tantamount to the progress of the research were the electrodes implanted deep within the brains of mice. Because of their depth, the electrodes made it possible to get detailed images of the brain, like those an MRI provides, without compromising the ability to watch neural activity on the millisecond time scale.

The next discovery was also a first. Recording data with the electrodes identified which parts of the brain were active when mice became depressed in response to a stressor. As the lab collected more data, patterns occurred in the electrical activity of the depressed mice, suggesting some predictability in how they would react to a stressor based on their brain’s activity.

“This is the first time we were really able to find that there are these electrical brain states that exist [and] reliably indicate a certain state that the brain is in,” Hultman said.

These patterns, named electome factors, offer an “electrical map of a specific brain state” like depression. Hultman then used that map to visualize and conceptualize the brainwide connections defining major depressive disorder.
Hultman said electome factors are “novel” and a completely new approach to complex brain disorders, so she brought their possibilities to Iowa City. Her lab at the university’s Iowa Neuroscience Institute will apply the discoveries from studying major depressive disorder to migraine, the most common neurological disorder in the general population.

Part of what makes these conditions complex is that symptoms of the same disorder differ from one person to another. Among people with depression, some may experience difficulty sleeping or sleep more than normal while others have no trouble sleeping. This variance in symptoms can affect which treatments prove effective, increasing the difficulty and stress of seeking help.

“It’s been really difficult to figure out what works best in a given person, and it’s very likely that there are actually different underlying electrical patterns that are responsible for these different pathologies,” Hultman said.

To develop a solution, Hultman will combine everything she knows. At a later stage in the migraine research she will work toward designing treatments that target sources of unhealthy brain activity and shut them down at the root.

From big questions to bigger ideas
An Iowa native, Hultman has been on physical and intellectual journeys that led her back to her home state with a new endeavor. Her fascination with the brain and its disorders started small, but she has always been asking big questions.

“My research interests have developed starting at very micro scales [with] individual molecules in biochemistry, to how those molecules interact in forming cells and within cells, to function. Then I got interested more in how in the brain, [the way] the cells are connected with one another is super important, more so than in other organs of the body,” she said.

She wondered about the world first from her tiny hometown of Crescent, just north of Council Bluffs. What started as general curiosity grew more scientific over time.

“I didn’t really have a context until later when I got to high school and took chemistry and physics classes and that clicked like, ‘Oh, these questions that I’ve been asking since I was a little kid, this is where the answers are,’” she said.

Hultman first came to the University of Iowa as a student; she received a bachelor’s degree in biochemistry, but maintained a strong interest in neuroscience. She said she still picked up knowledge about the neuroscience field, just indirectly and through “different lenses.”

The intrigue of brain science is not Hultman’s sole source of motivation for her research. Watching her grandfather live with Parkinson’s disease taught her at a young age how powerful the brain is.

“It was my first time in life to see a person go from seeing someone they know and can recognize to a totally different person. So the idea of what kind of thing could make that happen and that this could happen in the brain kind of sparked an interest,” she said.

Migraines have been a longtime research interest of hers, which stems partly from seeing family members struggle with this “thoroughly disabling disorder.” So she seized the chance to pursue this research at the University of Iowa where the most well-known migraine model in rodents was developed and the Iowa Neuroscience Institute had recently opened.

In her two years at the university, Hultman has landed two grants to fund her research, including the highly competitive National Institute of Health Director’s New Innovator Award. Hultman was awarded one of 53 grants, which will provide $2.3 million over five years for her research.

Now research is set to begin — but with this novel technique, everything is new territory.

The next frontier: migraine and machine learning
The main advantage of the major depressive disorder study at Duke is that depression “manifests as a state.” Its electrical patterns fluctuate less, so it is easier to determine when the brain is in a depressed state.

Migraine is more multifaceted, a wild card. First, Hultman said a migraine episode lasts anywhere from three to 72 hours, but no matter the time frame it has distinct phases.

Scientists recognize four phases of a migraine attack although not every person with migraine will experience all four. Each phase is accompanied by specific symptoms ranging from fatigue and sensitivity to light and sound in the first phase to periods of blurry or even lost vision in the second.

The complexity would appear to be a barrier, but migraine’s sophistication makes it an ideal candidate for Hultman’s approach. Her lab has identified 12 to 16 brain regions that could be active at different times during a migraine. Even better, they will track the activity by the millisecond.

“Where the precise timing we’re able to get is so critically important is we’re going to need to be able to map where in the brain the migraine starts, [and if] it starts engaging multiple regions at the same time,” she said.

Although it will focus on driving medical innovations, Hultman’s migraine research is also joining a growing movement to unite the benefits of machine learning with the medical field.

Upon returning to the University of Iowa as a faculty member in 2019, Hultman reconnected with a colleague from the Duke statistics department, Sanvesh Srivastava. Now an assistant professor of statistics at the university, Srivastava is helping Hultman simplify the vast amount of information she will collect throughout her research.

In the first two years, Hultman’s lab plans to gather data from mouse models to identify and map a handful of thousands of brain networks that are active during a migraine. This is where machine learning enters the picture.
Every two milliseconds, the electrical activity collected by electrodes in the mouse’s brain will result in 750 data points. In one second, that multiplies to 375,000 data points. So collecting data from just one mouse for a few hours creates an exponential number of observations that could not be studied without a machine learning model.

Statisticians commonly use a model called factor analysis to narrow large datasets, but to analyze brain networks they need something designed to handle the complex.

Hultman’s research is a statistical challenge because she wants to isolate a number of networks that is small relative to the total. Srivastava said nonlinear factor analysis allows them to do that while assuming “as little as possible” about the complex brain networks.

He said applying this model to his colleague’s research means starting with the knowledge that a few networks are active at once and rebuilding from there.

“[The model] tries to reconstruct the whole data by using a small number of networks. You’d like to transform the data in such a way that I’m as close as possible to the real data that I observe,” Srivastava said.

From the start of her career, Hultman recognized the value of collaboration across disciplines. As a result, multiple fields could benefit and learn from her research.

“The world is really open to you when you start to connect these different fields that have not been connected before, and talk to people who are different from you and don’t just do what’s expected,” she said.
With the help of other disciplines, Hultman said innovation finds “a new approach to problems that have been problems for a long time.”

She said the need for a new approach to treating brain disorders is critical. When the experience of a neurological or psychiatric disorder turns severe and deteriorates a person’s mental health, spending time searching for the right medication is “untenable.”

After completing the map of electrical networks associated with migraine, Hultman plans to go further and study the possibility of personalized medication. Her lab will use tools to alter how neurons in selected brain regions behave and see if and how they change brainwide network activity.

If they identify the molecular culprits contributing to a disorder like migraine or depression, Hultman and other biochemists could go on to create targeted treatment that gives people their lives back.

“[You are] taking some risks in areas where you might get a lot of pushback because it isn’t what people expect, and that’s hard. But then when you do something that no one thinks is going to work and it does work, that’s a cool, exciting thing and I think that’s where innovation happens,” she said.

She acknowledges that doubts and uncertainties will arise, but more importantly she knows that where unknowns lie, power lies as well.