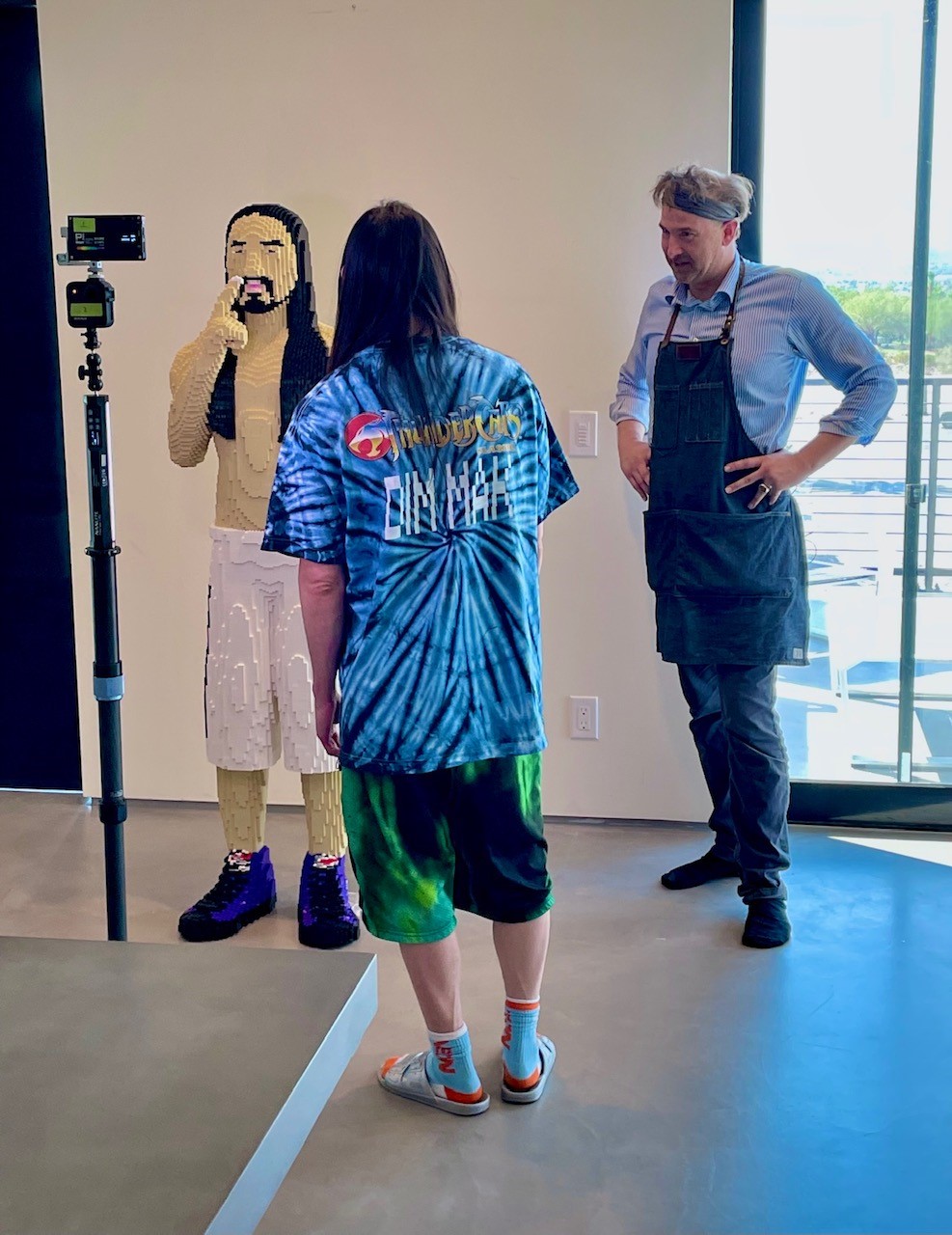 From a sales career at Wells Fargo to running a business building life-size Lego statues, Chris Ihle will celebrate his return to Iowa with a live Lego build of George Washington Carver at this year’s Iowa State Fair. He started his company, We Build U, in Iowa in 2018 with everyone working out of basements, but 2020 brought the opportunity for Ihle and his team to open a gallery at the Circa casino in Las Vegas. The George Washington Carver Lego build will be featured at the Iowa State University exhibit in the Varied Industries Building and honors the 125th anniversary of the renowned scientist receiving his master’s degree from the university.

How did you start a business building life-size Lego statues of people?
We’ve been at this for three years. We still consider ourselves a startup business, new to the art. Three years ago, I was working at Wells Fargo and I had this idea that people would really dig seeing themselves in Legos. And so I walked out of the bank, went to the dollar store, picked up a $20 kit of Legos, spread them out on my desk and started thinking about how we could put these together to make people or make a product that people like.

Originally I was going to take a couple of months, research and teach myself how to do it in my own time. But it worked out that I had to quit my job. It was a very lonely, trying three months of teaching myself how to build it. But then all of a sudden, I got to the point where I was above the waist on my very first client, and we could see it from the road, when people would drive past my place. So at that point the cat was out of the bag. I had to formally say I’m starting this company, and we’re going to be the only place in the world where somebody could walk in and order a life-size Lego statue of themselves or a loved one.

How do you build a life-size Lego statue?
How it started was I wanted to build a stormtrooper like the one Barney Stinson has in the show “How I Met Your Mother,” and I thought I bet using this three-dimensional drawing program called Sketch Up, I could use the push-pull feature to do the masks at the size of the Legos and create a way to give me a road map to that stormtrooper.

But I knew I needed help, so I met this guy named Chris Rau who just graduated from Iowa State; he’s still with me. He said that’s a great idea, but it’s never going to work. So Chris figured out the right way to do it. We knew we could do it, we just didn’t know how. We found out that we could do this by just using existing technology that’s already out there. We use three-dimensional drawing software to draw everything up ahead of time. If you don’t have a road map with what you’re building, you’re on a one-way track to the loony house.

Sometimes we think that we’re smarter than the computer, but the technology is always right except when it comes to faces. Then we rely on a team approach or we rely upon our own gut instinct. So the technology is really involved in the drawing and how we draw it up because the Legos that we use are the same Legos that Lego came out with in 1958. We use the most basic Legos; we don’t use any of the fancy new ones. We just use the good old-fashioned bricks and plates, and that’s our niche.

How did you find clients, and what was their response?
I followed the Wells Fargo sales approach to a T. At the end of the day after building all day, I would reach out to 30 people that I thought could benefit from my product. I would say I use technology to build the pieces, but creativity to sell them. The crazy thing about it was the next morning I would have three people reach out and say, “I’m interested in this, tell me more about this.” So I’m getting a 10% rate of return on people who are interested in my product, and that’s what gave me the confidence to say all right, let’s go build. My first clients were the largest real estate agents in the United States; I was featured on a national television show, “Million Dollar Listing Los Angeles.” Our second client was John Pappajohn, then Simon Estes, a world-renowned opera singer, and then the Westminster Dog Show, and yet we had never built a dog before.

What is the motivation for you and your team?
Legos are just a vehicle that we use to capture the person. I kind of jokingly say whether we were using Legos or Pixy Stix, it doesn’t matter. People always ask how many Legos do you use and how long do they take? It doesn’t matter how many Legos we use, it doesn’t matter how long it takes, we’re not doing it for the sheer grunt of the work. We just do it because we’re there to capture that feeling or that emotion of what we’re creating. So with George Washington Carver we’re trying to educate people on what this man did. One hundred and twenty-five years of innovation and technology, and throw in a little creativity — we think we nailed it. So this week we’re going to build George Washington Carver using 44,000 Legos and we’re going to go 11 hours a day.

How did you come to return to Iowa and to do a build for your alma mater?
Everything I learned about art I learned from three people at Iowa State: Carole Custer, Jeff Johnson and Lynette Pohlman. Being a third-generation Iowa State student and having my crew all love themselves from Iowa State, I knew we wanted to do a job for Iowa State. I’ve been reaching out to Iowa State for three years trying to lay the groundwork and trying to figure out how my art could promote what they have going on. And after three years, Carole Custer said, “OK, well, we’re going to promote George Washington Carver. Chris, you can build George Washington Carver, right?”

What will the George Washington Carver Lego statue look like?
Myself, Carole Custer and Paxton Williams did our research and came across an old photograph of George Washington Carver in the lab putting in the work. That’s him, you know, we’re not going to build him standing there accepting an award because that’s probably not what he would want to be known for; he would want to be known for putting in the work. And that’s kind of what we do, we just put in the work.

In what sense is your work an innovation?
Our innovation is simple. We’re just appealing to the human aspect of people. We took a product that the world has loved for the last half a century. We take people’s desire to see themselves and their loved ones, and we combine the two. So is that innovation? But it’s also kind of a good idea. Iowa State made a backdrop for me when I’m going to be sitting there building, and it had a quote from George Washington Carver. It said something to the effect of, “If you do the common things in life in an uncommon way, you command the attention of the world.” I’m like OK, everybody plays with Legos. We’re not innovative because we love Legos, everybody loves Legos. But we’re taking those little pieces and creating something big in someone’s life.

What has changed over the last three years? What’s been the biggest takeaway?
You asked me this question when I’m super homesick and can’t wait to get home to be able to do this project. But when I first started, honestly I think my goal was to be in Las Vegas and make a name for myself and be fancy and live it up on Sunset Boulevard in Los Angeles. But after three years and having the opportunity to do some of that, I’d trade it all in just to go home. I’m just ready to come home this week.

Favorite Lego build to date? And why?
Simon Estes, hands down. It didn’t matter what it looked like — Simon Estes isn’t my favorite piece because we used the most Legos or because it was the most intricate, or because it was the fanciest. My favorite piece that we’ve ever done is Simon Estes because it’s Simon Estes — he’s a great man. And we blew his mind. Here’s a man who has seen some things in his life. He was a world-renowned opera singer in the ’70s traveling the world. I can’t imagine — I wish I could — what Simon Estes has seen in the world. So my favorite piece to date is Simon Estes, not because of anything to do with how the piece looks or its physicalness. It’s just because we think we captured the man perfectly — we took the photograph of him from the 1970s when he was performing at the Met, and it became a piece of history.