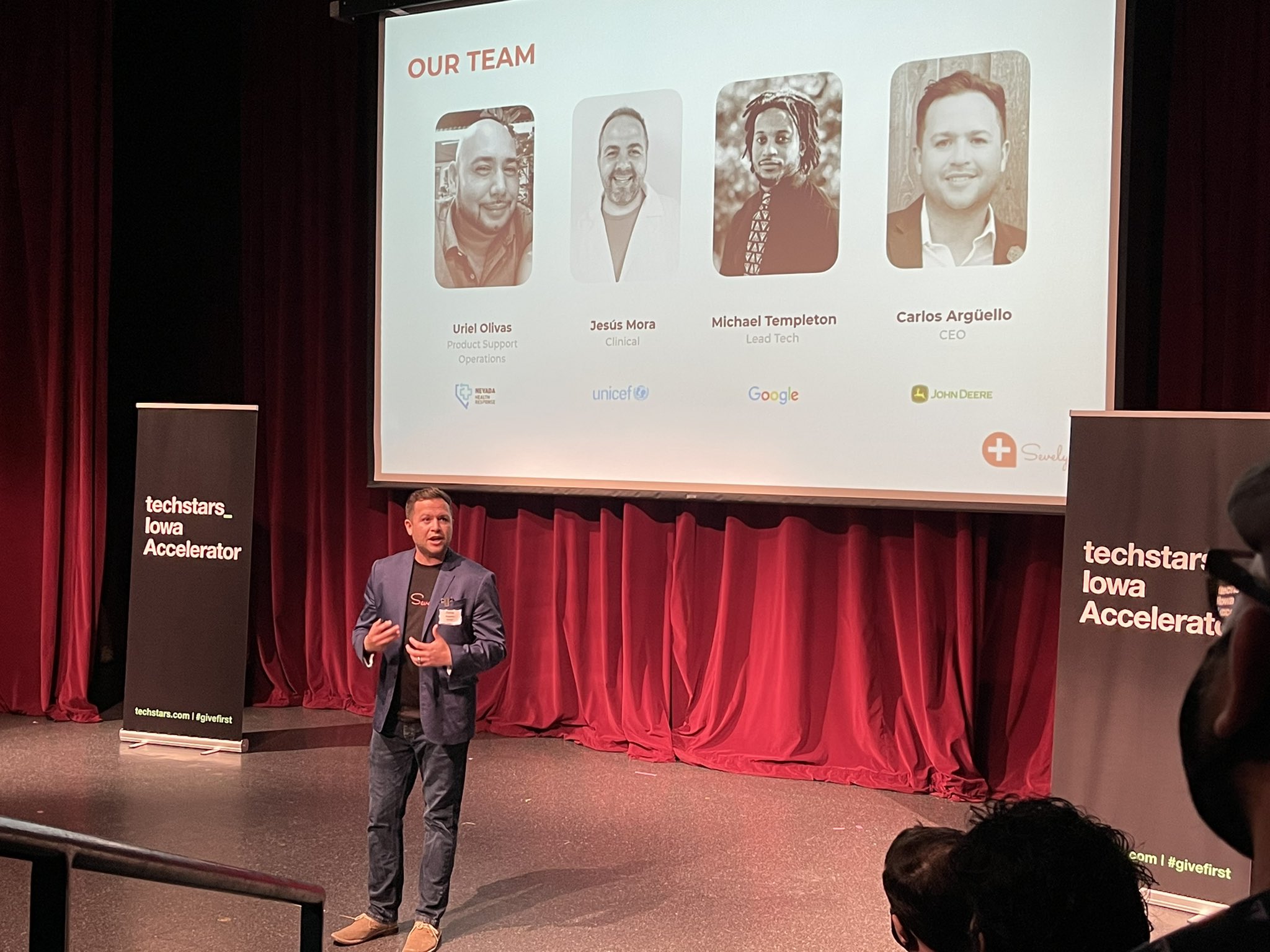 The Business Record spoke with Sevelyn CEO and co-founder Carlos Argüello when Techstars was just gearing up. At the time, Argüello had gathered a handful of users the weekend before the accelerator began — now he said the number of active paid users is growing each week and the goal is to have 1,000 by the end of 2021.

With Sevelyn, the Latino population can connect with Spanish-speaking therapists who are based in Latin America and bring an understanding of cultural differences and stigmas.

In his pitch at Demo Day, Argüello said his mother attempted to seek mental health care when she immigrated to the U.S. 30 years ago.

“Do you know what has changed for her and the 60 million Latinos in the U.S. like her trying to seek better access to mental health care? Absolutely nothing,” he said.

There is a shortage of therapists overall, but even more so when looking for ones who are bilingual. For every 2,000 patients seeking treatment in Spanish, there is about one therapist available to serve them.

Among Sevelyn’s achievements throughout the accelerator, Argüello said one of the biggest wins was the validation of the startup’s concept.

Interested users currently total close to 4,000. There have been technical glitches in connecting users, but the team is working to resolve them while Sevelyn is still in its pilot stage.

When services launched, Argüello was expecting users to schedule sessions once a month. He and the Sevelyn team have found instead that 60% to 70% of their paid active users are having weekly sessions, confirming that services are in demand.

Argüello said partnering with organizations or cities “who truly care about the emotional wellness of their constituents” is part of Sevelyn’s future, but services launched direct-to-consumer first so they could engage with individual users before moving on to servicing larger groups.

That didn’t stop employers from expressing their interest, however. Companies, including some beyond Central Iowa, have been approaching the team with curiosity.

“There are several companies that are rural-based companies in Latino-rich cities where, when they hear our message, they see us as a strong partner because when they have [employees] come to them seeking mental health support, they have nowhere to turn to,” Argüello said. “In that situation, we are very much more so an aspirin than a vitamin because they are in rural towns that depend on the economic development of the Latino population.”

Next steps and new tools

Argüello’s takeaways from Techstars extended beyond progress for the company and will be long-lasting, he said. In addition to gaining confidence as a business leader and building a network of support, he said the GiveFirst mentality at Techstars is something he will apply both personally and professionally.

With mentors at the core of the program, participating in key events like Mentor Madness, Ben McDougal of Techstars Iowa said the GiveFirst mentality fosters mentoring relationships that are without “hidden agendas” and encourages pouring efforts into helping the startups succeed.

For Sevelyn, GiveFirst means creating transparency around emotional wellness by providing data and information on emotional wellness that isn’t widely known. Argüello said when a patient better understands their symptoms and experience, that could be the catalyst they need to seek help.

“After they understand the situation, if they feel that they still need an extra little push of help or just a different perspective, that’s where we can go with the connection to our emotional wellness providers,” he said.

The goal to encourage self-help in addition to therapy services is in line with one of Sevelyn’s long-term plans: digital self-help tools.

Product expansion could take the form of tools that help users manage symptoms in between therapy sessions or target other wellness areas like sleep and stress management. Argüello said it’s most important that the patient can choose their own path to wellness, customizing it with solutions that work best for them.

Sevelyn’s other long-term vision is to replicate the startup’s concept to provide the same services to people who speak languages other than Spanish and English. Once Sevelyn is scaled nationwide, it will be able to serve people facing language barriers in mental health care.

In the meantime, Argüello said the rest of 2021 and 2022 are focused on raising a venture capital round and scaling the business for launches first to other Midwest states and then nationwide. He plans for Sevelyn to reach profitability by 2023 and grow to a $50 million business by 2025.