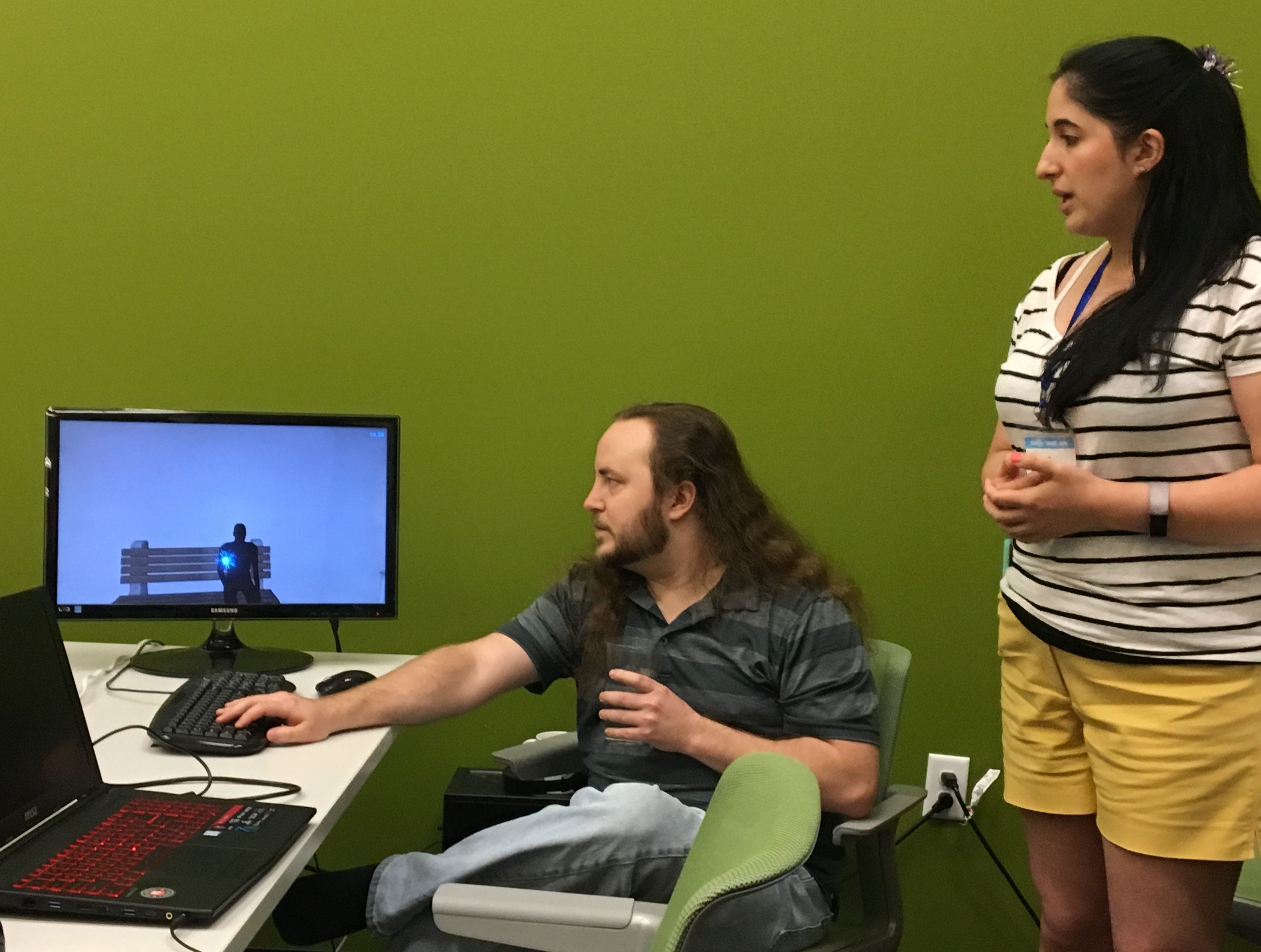 Studio Ghiblet team members Michael Casner and Lauren Kacere demonstrate the starting screen of ‘Spark,’ a one-player computer puzzle that challenges the user to piece together a dementia patient’s past based on photographs and audio clues.

When imagining dementia as a desktop game, Lauren Kacere and her team thought of an art gallery.

As the game character caught in an octagonal room, the character walks closer to several photographs framed on the wall, listening to short voice clips – their memory of a moment in history. From those fragments, the player must piece together aspects of the character’s life before time runs out and their ‘spark’ runs out.

It is a thoughtful example of how dementia patients struggle with memory and identity – and the game was created in under three days at the first-ever Hatchlings Game Jam, which wrapped with a final demonstration of team games at 10 a.m. on Sunday. “Spark,” created by Studio Ghiblet teammates Kacere, Erin and Josh Rinderknecht, Michael Casner and David Kanuik, received overall the Best Game title by judges from Hatchlings Games, which hosted the weekend competition for the first time.

“We’ve been talking for a while, noticing that there hasn’t been a startup weekend for several years in Des Moines. That’s something that I think was really good for the startup community, was to get together a bunch of people from different disciplines and throw them in a room together for a weekend and see what they come up with,” Hatchlings founder Brad Dwyer said. “We were kind of lamenting the fact that nobody was planning one, so we thought, ‘well, we can plan one.’”

Meanwhile, the Des Moines-based mobile gaming company has had a challenging time reaching out to potential hires who could fill developer jobs.

“What we’ve realized is that we haven’t really done a good job building up our pipeline of relationships with people, so that when somebody’s ready for a programming job, they ever think of us. So in the process of trying to hire somebody, we’ve been racking our brains about what are creative ways that we can be one of the companies in Des Moines that they think of, when they think, ‘what’s a great tech job in Des Moines?’” Dwyer said.

Hatchlings kicked the weekend off with an opening party on Friday evening at the Gravitate Coworking space, where participants grouped up in informal teams. The only rule: games had to be completed by 10 a.m. on Sunday, and ready to go.

Participants could work on any game ideas they desired, but Hatchlings issued an additional challenge with the optional theme “games for good.”

A few teams took on the challenge: “Spark” won $300 as Best Game overall, as judged by Hatchlings staff, and the team plans to keep developing the concept and work with dementia nonprofits to build public education. “Ew, Gross,” a board game developed by Jessica Ireland around trash cleanup, was named Best Game for Good by Hatchlings staff, and “Hive Mind” by Alex Reed won Best Board Game.

Other teams explored topics like gender dysmorphia, space exploration and grocery shopping while autistic – that game uses virtual reality headsets to help the player understand everyday stressors for autistic shoppers at the store.

All the development and creative property at the end of the weekend belongs to creators, Dwyer said.

“We’re not trying to find ideas for games that we could run with or anything like that. We just want to pull together people who are interested in these sorts of things, and then what they do with them afterwards is kind of up to them,” Dwyer said. “It’d be really cool if some of the teams continued on with their idea after the weekend.”