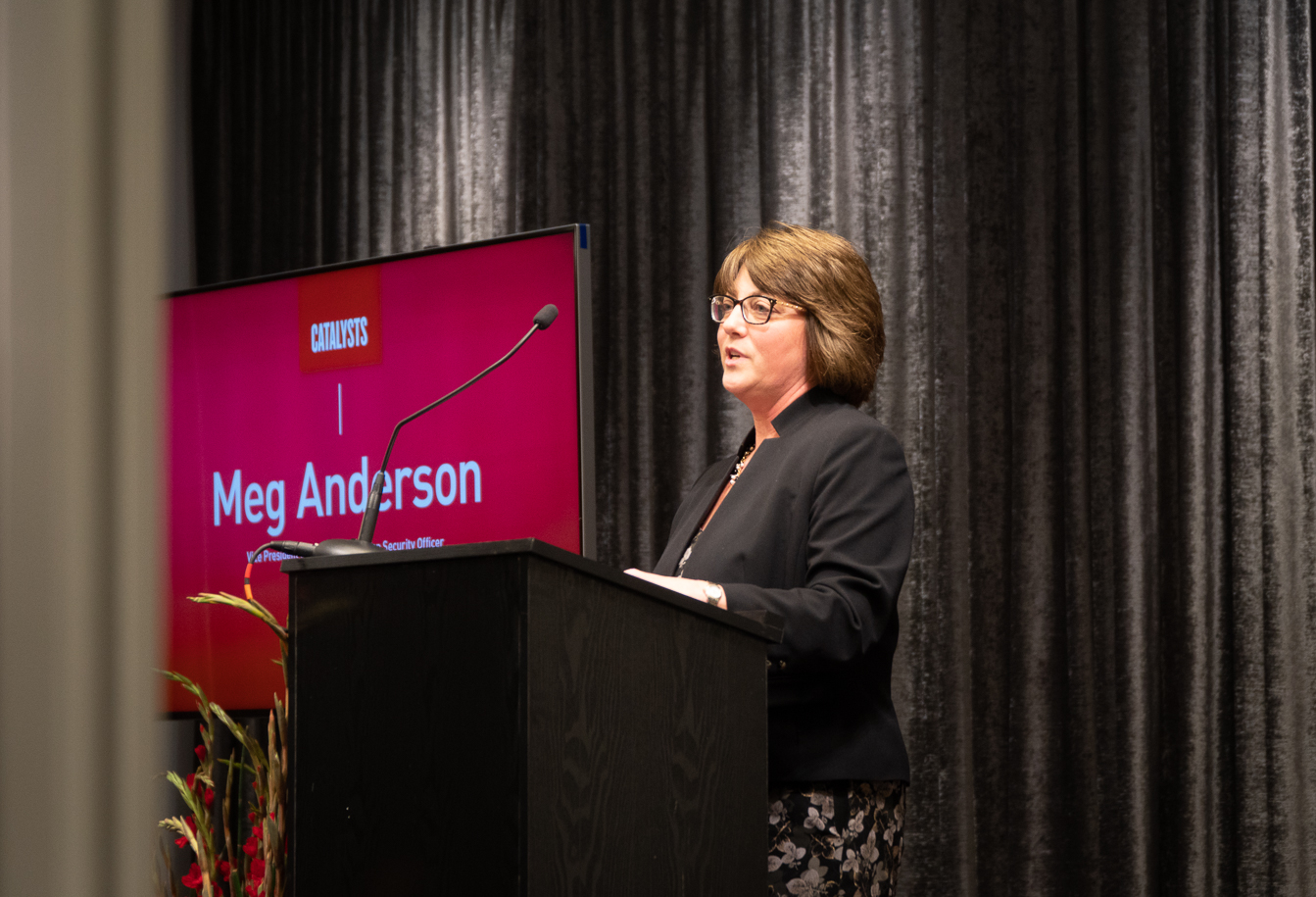 Des Moines met the stories of ten women shaping their industries on Tuesday.

At the Technology Association of Iowa’s reception of the Catalysts project’s first year, attendees gathered in the downtown Tea Room to hear honoree’s meditations on technology, female leadership, and a sense of humor in the workforce.

“It occurred to me that IT professionals and entomologists actually have a lot in common, because we both work on bugs,” noted honoree Laura Higgins.

Jokes aside, each honoree in the 2018 Catalysts series brought with them unique reflections on their journeys and industries. Rather than speaking for them, we’d like to round up a few key observations here. Those that missed the live event on Dec. 4 can visit www.catalystsiowa.com for the full interviews released by TAI throughout the year with each of these women.

ON STEM AND CHANGE

“Cyber[security] is a little bit different from IT, where we’re not sharing trade secrets – we’re really all fighting the same bad guys,” Anderson said. “I’m really optimistic about the information security community in Iowa. I think it’s flourishing through efforts of passionate information security professionals across the state.”

“I would have loved the opportunity to go back to my CEO when he was 14 years old and say, ‘Hey Reynolds – when you grow up, where do you think you might want to put that second warehouse?’” Kerns said. “I need to think about not where we’re going to be tomorrow or where we’re going to be in the next couple years. I need to think about, what are the big things that are coming – that are going to take time for us to do.”

“Sometimes people have an emotional reaction, ‘we are never going to do that,’” Kerns added. “That’s great. Have that emotional reaction today, because it’s really in three years that I need you to be okay with this.”

“The concept of universal design for learning is that from the onset, you’re considering all of the needs of all of your students at the beginning, and you’re developing materials so that it’s really embedded in everything that you’re doing,” Mark said. “Student success and inclusion are pillars of our strategic plan for the university.”

Ada Woo, senior director of strategy implementation and operations at ACTNext by ACT

“Girls and boys are doing equally well on standardized tests, especially in math and science. And if you look, girls are doing even better than boys in the early grades,” Woo said. “The data is telling us that girls don’t think STEM sounds cool, they don’t think STEM is for them. They don’t see themselves in a STEM job.”

“Make sure [kids] know that their future jobs, we as parents can’t even imagine what that looks like,” Mwirotsi said. “If your child is not getting ready for their future, they’re losing. Every single child should be getting ready to produce, not consume, technology.”

“The best thing we can do for the Iowa economy is to support high-paying jobs. I’m very conscious that I support 40 families, and almost everybody that I employ is the principal breadwinner of their family,” Tinsman said. “Creating wealth is not embarrassing. It’s not. It’s the driver of the economy, and it takes businesses producing what people want in order to play our cards.”

ON WOMEN AND LEADERSHIP
Tinsman

“We are not playing our cards with a full deck,” Tinsman continued. “Let’s measure: how many students that are female take the AP Computer Science test? Twenty eight percent last year … How many women in 2018 graduated with a computer science degree? … Eighteen percent. How about in 1985, how many women graduated with computer science degrees? Thirty seven percent. What the heck?”

“For the first half of my career, I seriously did not understand or recognize the importance of advocacy for women and young scientists in our field, and I feel kind of regretful about that,” Higgins said. “It’s easy to say what you aren’t – I’m not the CEO, I’m not the HR lead, I’m not the diversity and inclusion mentor … but if you think about what you are, every single one of you can write down at least two or three groups in which you have a seat. You may not lead those groups, but you have a voice in those groups, right?”

“There are at least 2,000 things that you can do actively and routinely,” Higgins added. “I would say don’t wait until half of your career is over to recognize the power that you have, the voice you have. And today is only Tuesday.”

“As a woman founder, the journey forward is difficult. Let nobody lie to you,” Mwirotsi said. “We struggle every single day, but because we believe in the abilities of these kids, we work as hard as we can with amazing volunteers.”

“I’m a firm believer that if you don’t see someone that you can relate to, doing something that you aspire to, you won’t think it’s possible,” Woo said. “The key here is to be really relatable and inspirational. When we think about role models, we often focus on the inspiration part and we completely forget about being relatable. We really need to be more cognizant in sharing our successes and failures.”

“My kids graduated from a high school where there was no AP computer science [classes],” Tinsman said. “So I worked for years with several districts to form a consortium of other people in colleges and John Deere to get Computer Science AP. If you don’t start in high school, it is so hard later on [to join].”