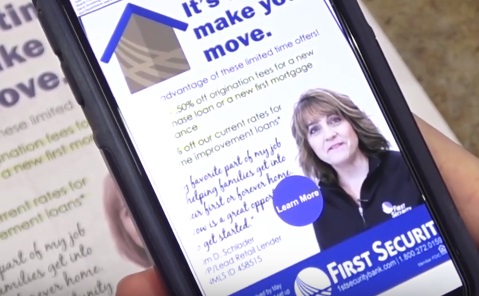 CCPress AR, developed by Strata AR, allows advertisers in the Charles City Press to link print ads to multimedia displays and specials for readers of the three-county newspaper.

In community journalism, maintaining advertising revenue is a tough nut to crack. A small publishing company in northeastern Iowa is turning to augmented reality (AR) for the next breakthrough.

The Charles City Press is debuting the CCPress AR app on June 12. Starting with paid advertisements, readers with the app on their smartphone can scan any advertisement marked with the Press eagle logo to view updated video, specials or multimedia displays, publisher Christopher Hall said.

“With the world evolving more to phones, wanting more timely news, data and sales, this is a way we can update on the fly,” Hall, co-owner of Enterprise Media Inc., said. “So we can change any print publication, even after it’s printed.”

The Charles City Press circulates to 3,150 in Floyd, Chickasaw and Butler counties — and across four school districts — Monday through Friday, although the actual readership is suspected to be higher, Hall said. Enterprise Media prints the Press, the Nashua Reporter, the New Hampton Tribune and ancillary products for the area such as community guides, local athletics posters and special publications.

Enterprise Media owns just over a hundred of those regular products, and prints for outside organizations as well, Hall said. It’s a lot of advertising space for local businesses, and by introducing a new AR app for readers, Hall hopes to build up the value for both readers and advertisers.

Fifteen businesses have already purchased the updated ads, which cost an extra $25 to $30 in addition to the advertising space. Another 13 to 15 businesses have expressed interest in the product, Hall said. Brokers and car dealerships are interested in linking to refreshable photo slideshows of real estate or vehicles for sale; a floral shop ad allows the app’s user to scan the ad beneath obituaries and order flowers instantly.

The Press is stepping slowly when it comes to linking the app with editorial content, Hall said.

“Right now the editorial staff does a great job of making the print product incredibly strong. I don’t want to make them too thin by having to shoot video or linking articles to stats,” he said.

The app would work perfectly for the sports section, he said, bringing updated stats and clips of plays even if a game finished after the paper was printed and distributed.

“We’re trying to make our print publication as strong as we can, because it holds so much credibility,” Hall said.

Larger publications are attempting to develop their own AR platforms, said Hall, who sits on the Iowa Newspaper Association Board of Directors. CCPress AR was developed by Strata AR, based in Utah.

“We’ve kept this close to the chest for the last 12 weeks since we started this process,” he said. “That being said, right when the first article came out [in the Press] we sent it to a group of newspapers the same size as Charles City, who all thought it was really cool.”

The city government has been attempting to strengthen community access to fiber broadband, which Hall said would support other potential digital services the Press is considering, such as mobile push notifications on breaking or updated news stories.

“Large data files aren’t an issue for the town of Charles City, which they are in our surrounding communities,” Hall said. “[It] makes these apps and applications a lot more effective if you have high-speed internet.”

For now, the staff at the Press is waiting to see how the community responds to the AR capability.

“My hope is that … somebody’s going to figure out a monetary way to make small, either weekly, biweekly or small, small dailies like ours a profitable venture again,” Hall added. “It’s going to come back to people [wanting] the local news. They want to know about their community.

“The issue we’ve had is news is free and our overhead is really, really steep. Hopefully with this technology, it brings a lot of the overhead down and affordable for weeklies and small dailies such as ours.”

Disclaimer: Kate Hayden is a former reporter for the Charles City Press.