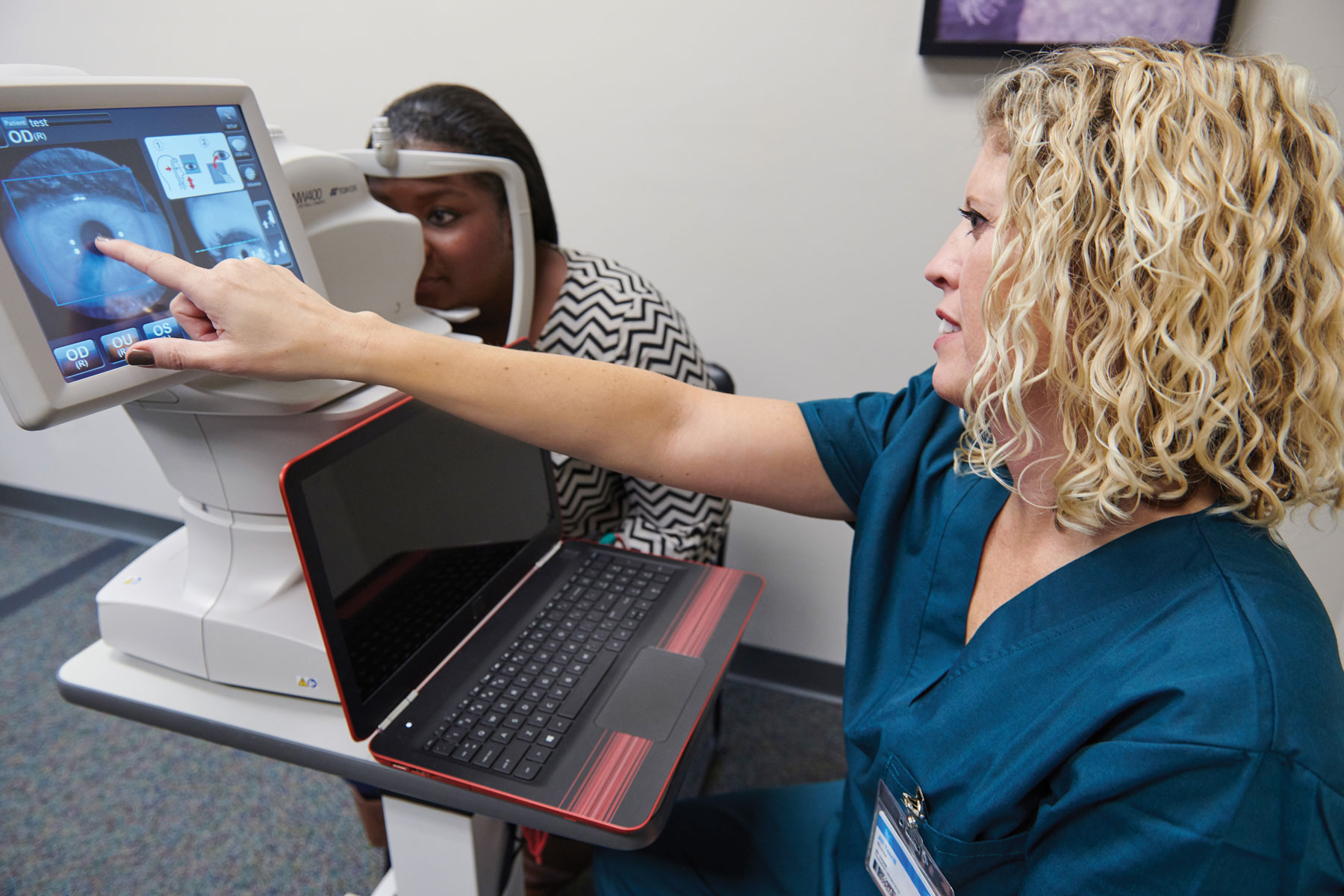 One of the first FDA-authorized artificial intelligent solutions in ophthalmology sprouted in the laboratories of University of Iowa.

The idea for advanced technology to help patients who could be going blind had been planted years earlier – first in the Netherlands, by an ophthalmology medical resident with an interest in computer science, then refined in Japan, where his interests evolved into postdoctoral research.

2018 started with a whirlwind: a “breakthrough device” designation from the FDA for IDx-DR, an artificial intelligence diagnostics system that analyzes retina images for signs of diabetic retinopathy, a leading cause of blindness in the U.S.

Since that time, IDx-DR has become the first AI diagnostic system to receive clearance from the FDA to begin use in clinical care, beating competitors such as Google’s health research branch to the market.

Abramoff began his first artificial intelligence research projects 30 years ago in Japan, during postdoctoral research at the Riken neural networks research lab. Abramoff’s academic background in both ophthalmology and computer science uniquely positioned him as an expert in machine learning and image analysis.

“People say, ‘Wow, what a great combination.’ Well, I wasn’t too sure. It’s just things I love to do – both patient care and software,” Abramoff said.

As an ophthalmology medical resident in the Netherlands, Abramoff had theorized that a computer might be able to detect signs of diabetic retinopathy before doctors – decreasing the number of patients who lost their vision to the disease. Yet, he recognized that health care had not benefited from digital services to the extent that other industries had.

“[Information technology] has not really been helping much in health care, to be honest. Electronic health care records actually decrease productivity, meaning I see fewer patients now than 10 years ago, and I was seeing fewer patients 10 years ago than 20 years ago. … It does not help me in my clinic,” Abramoff said.

He still believed AI could raise productivity the way it has in other industries, such as farming or shipping services. When he arrived at the University of Iowa in 2003 as a professor in ophthalmology, Abramoff received funding from the National Institute of Health to study AI applications in health care.

“My idea was if I write, if I do the science well and published about it, people would say ‘Wow, that’s brilliant,’ and do it, right? That never happened,” he said.

Diabetes is the leading cause of blindness in the U.S. About 25,000 Americans go blind from diabetic retinopathy, Abramoff said.

Diabetic retinopathy can develop in individuals living with either type 1 or type 2 diabetes, when too much sugar in the patient’s blood causes a blockage of blood vessels that nourish the retina, according to the Mayo Clinic. Patients may notice blurry or dark spots in their vision, or may not experience any symptoms at all during early stages of the disease.

“It’s almost entirely preventable if caught early, but you need to catch it early, not when people have symptoms, because then it’s too late,” Abramoff said. “If you come to me with diabetes and blurry vision, chances are that something bad has happened already. We can treat it a little bit, but not really well.”

The IDx-DR system is a small tabletop operation. The setup, which guides trained operators through the process, uses a robotic fundus camera to capture two images per eye and sends the images to the IDx-DR analysis system on a nearby computer. That system takes about 20 seconds to determine if signs of diabetic retinopathy are present, said Abramoff — problem areas on the scan, which shows up as discoloration, are easily overlooked to an untrained individual reviewing copies of a scan. “Training” the system to differentiate between normal and abnormal retinas took years and millions of image examples.

“If you worry about racial bias, you better be sure that the way you train your machine learning algorithm contains all the different varieties of what retinas look like,” Abramoff said.

IDx-DR spent nine months in a regulated field trial period, including in diabetes detection clinics near the U.S.-Mexican borders, which can help patients with nearly every aspect of diabetes management — but they couldn’t provide diagnostic eye exams, Abramoff said.

“These people go blind [because] the closest ophthalmologist is a four hours’ drive away. So there was just nothing you could do for these patients,” he said.

IDx installed the IDx-DR system within a New Mexico center and spent four hours training staff members on the system — nurses, physician assistants and technicians can all use the system without an ophthalmology degree.

“Then we left for nine months, and they were on their own,” Abramoff said. “The AI guides them through taking good-quality images and what to do and what not to do, then it makes a decision in as little as 20 seconds. The patient has the results right then and there.”

Meanwhile, the company partnered with the Fundus Photograph Reading Center of the University of Wisconsin-Madison to see if IDx-DR would detect as many or more signs of diabetic retinopathy as dedicated retina specialists.

“Those people … will bring in the best photographers that exist, they only take pictures of the retina, they’ve done it their entire lives and they’re qualified by this Reading Center as being the best. So we flew them in, we had the best retinal imaging equipment for people to take the best images possible,” Abramoff said. “Logistically, it was an enormous operation, even though it sounds quite simple.”

Ultimately, 900 patients were tested on IDx-DR. In April 2018, the FDA cleared IDx-DR to become the first autonomous AI system to make a medical assessment without requiring a physician to interpret the results. By June, the system launched at the University of Iowa’s Diabetes and Endocrinology Center, and in October 2018 IDx signed an agreement with ophthalmic device manufacturer Topcon to exclusively sell IDx-DR with the Topcon NW400, a robotic fundus camera. Abramoff said he had been in discussion with Topcon over best use cases since 2001 — before Abramoff even founded IDx.

“It’s interesting, because we anticipated when we got FDA approval there would be some challenges given that the health care system was entirely built around physicians and humans,” he said. “When you suddenly come in with an AI, we expected challenges, but we overcome those challenges. And one by one, we are overcoming additional challenges.”

IDx won’t share how many locations IDx-DR is used in, although Abramoff said the company has “more than eight” contracts signed. The company recently installed in a New Orleans diabetes education facility, where Abramoff said eye care and diabetes care providers were devastated after Hurricane Katrina hit in August 2005.

“Where we go, it’s just very exciting,” he said. “You know, it’s the first autonomous AI in any field – not only medicine – that’s actually publicly available, meaning patients can get it now.”

Abramoff’s research has brought international renown and at least 17 patents in AI and image analysis. It has also brought him, as CEO of IDx, the chance to provide testimony to the U.S. Congress and White House Office of Science and Technology.

In November 2018, Abramoff testified for the Federal Trade Commission, specifically on AI’s role and safety in health care.

“I was by myself talking about all of health care, and saw a lot of publicity around that, because I made some remarks about the safety, efficiency and equity protection of AI. … One thing I mentioned was that we have medical liability insurance, because we know it’s an autonomous AI [making] some medical decisions without human oversight,” Abramoff said.

That prompted “this big thing that went everywhere,” as Abramoff said.

“Everyone started talking about, ‘What does it mean when autonomous AI companies have liability insurance?’ We took a strong stand there. The American Medical Association came out with a very strong letter of support, many organizations supported what I said. And that sort of led to … my invitation to the Senate Finance Committee to brief them on AI in health care, and how it can lead to cost savings and what the payment model should be,” he said.

Starting in the spring of 2019, Abramoff expected to keep traveling to Washington, D.C., as an expert in AI autonomy. In May, the U.S. Patent and Trademark Office planned to host him to speak on AI patents in intellectual property.

“It led to, rather than only speaking about diabetes and blindness and diabetic retinopathy, it’s now a more general approach to how we should look at AI in health care, and what it could mean,” he added. “It’s a much broader discussion that we started.”

IDx has already moved locations twice, jumping between lab spaces in Iowa City and then to a larger office building in Coralville as part of the University of Iowa Research Park. Now the company is looking at building on a plot close to its current location to fit the expanding staff.

“We’re still in a record growth phase. Some extra developers, but mostly sales and marketing staff,” Abramoff said. “We are running out of space because of all the new hires and the expanding team. … We either need to find a big building or break ground on a new building. There’s no way around it.”

Abramoff sees potential for identifying other maladies: macular degeneration, another leading cause of blindness that also has preventive treatments available; glaucoma; early detection of Alzheimer’s disease, which can be detected in the retina; and other conditions, such as ear infections.

IDx is developing prototypes aimed at developing some of these conditions, and the FDA is in contact with Abramoff’s team as they continue researching autonomous identification.

“Each of them is about a billion-dollar market. We hope to capture a substantial part of those markets,” Abramoff said.

It also puts IDx in sight of competitors such as Apple and Google, which have both invested in health care research. In 2016, Google Research published its own studies into deep learning algorithms for detecting diabetic retinopathy, and announced new research partners in Thailand as recently as December.

“I was so well-received here that I wanted to do something back and create jobs here. … My dream is [if] we get big, people leave and start their own companies [here],” he added. “That’s how the [San Francisco] Bay area got started – as one company, then two, then three. There’s no reason why it couldn’t happen here.”