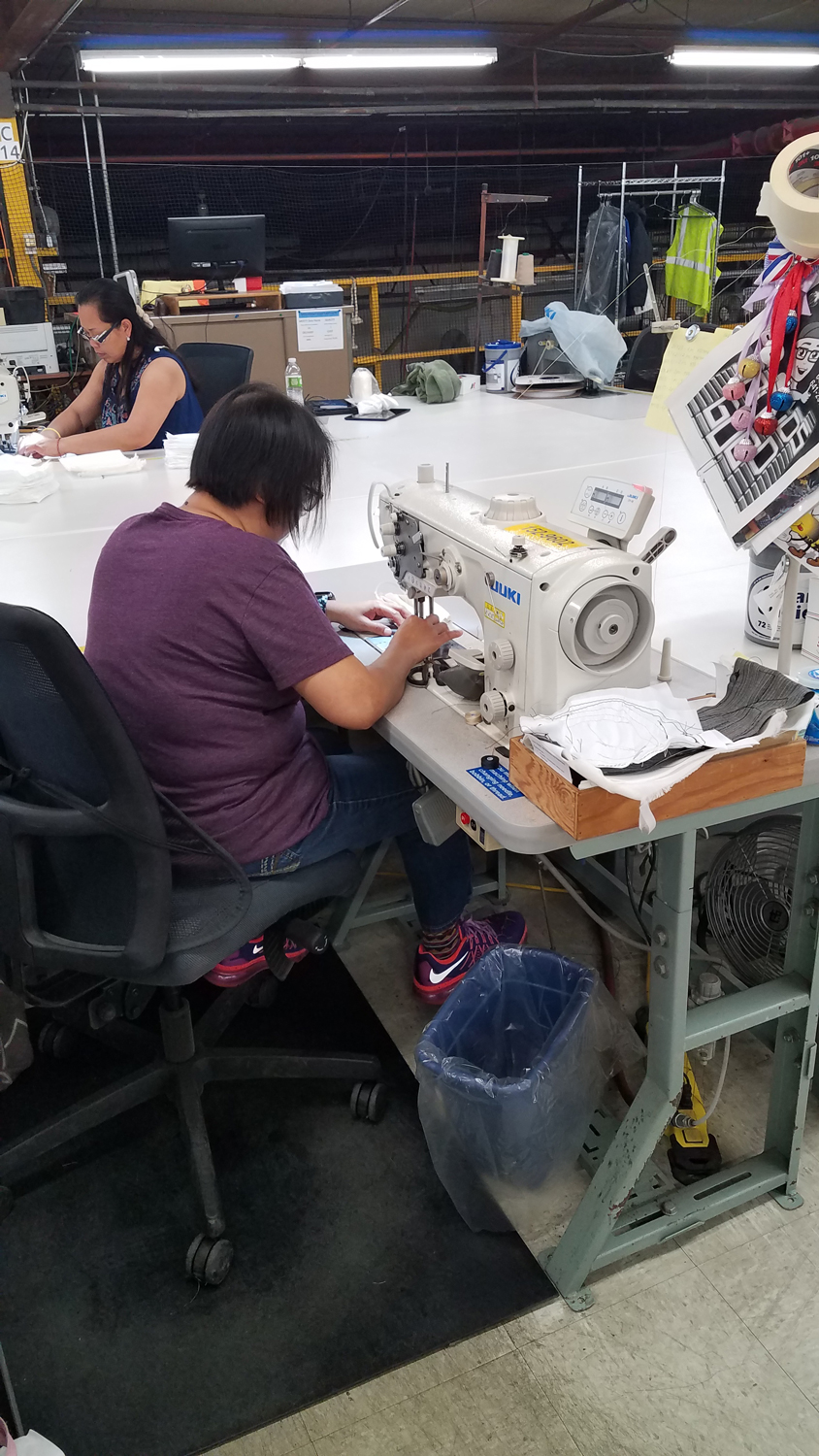 Manufacturers ranging from recreational vehicle makers to distilleries and injection-mold companies — as well as companies outside the manufacturing industry — rapidly shifted their organizations’ talents toward producing critically needed personal protective equipment for front-line health care workers in their communities across Iowa.

Among the largest manufacturers that jumped into making PPE items was Deere & Co. The global farm and construction equipment maker committed to make at least 225,000 protective face shields for distribution to health-care workers across communities in eight states where it has operations, including Iowa. The PPE items are being delivered to 16 Deere factories in those states for distribution to health-care facilities.

“Our manufacturing and supply management teams, along with our production and maintenance employees, the UAW, and our partners have worked tirelessly to ensure we could lend our support and protect our health care workers during this crisis,” said John May, CEO of Deere & Co. “By working closely with the communities where our employees live and work, we can help support the needs we’ve identified close to home and, as the project expands, address additional, urgent needs across the country.”

Elsewhere in Iowa, two companies whose plants are 200 miles apart nevertheless collaborated to develop a low-cost face shield for health workers, after being connected by consultants at Iowa State University’s Center for Industrial Research and Service (CIRAS) program.

The project was a direct response to Gov. Kim Reynolds’ public request to companies statewide to contribute more than 500,000 face shields for the state’s emergency stockpile. The companies’ goal was to produce and deliver a half-million face shields over a month’s time.

“Our goal with this project was to bring a quality PPE product to the market as quickly as possible to aid our front-line health workers,” Gold said.

Winnebago Industries, which suspended operations at its recreational vehicle manufacturing plant in Forest City for several weeks during the height of the pandemic, converted some of its cutting and sewing capabilities for RV furnishings to produce cloth face masks. As of late April, more than 25,000 masks were made and distributed to health care workers.

“We worked together with the state of Iowa and MercyOne – Mason City to produce a Level 1 fabric mask that is reusable and launderable,” said Chad Reece, director of corporate relations with Winnebago. The company’s Chris-Craft boat division in Sarasota, Fla., also used that design to produce masks for health-care workers in Florida.

“We actually purchased additional equipment to help specifically with this project, Reece said. “There have been some donations involved in this, but right now we’re operating it like a pass-through. We’re not making a bunch of money on these.”

Winnebago also participated with a coalition of manufacturers coordinated by a 3-D printer company, in which Winnebago joined other companies in 3-D printing hundreds of visor parts that it shipped to a central point where clear acrylic face masks were attached. “Because of this [coalition], we’re able to get a lot more value out because we’re sharing our capabilities,” he said.

“The incredible part of this is that we’ve been able to do it at a time when we’re otherwise not working,” Reece said. “I’m kind of proud of the fact that our company has been able to pull this together and do this.”

The assistance has extended to other types of high-need supplies as well.

“We felt it was the right thing to do in these extraordinary times,” said Scott Bush, owner of Foundry. The distillery also partnered with Atlantic Coca-Cola Bottling Co. in Atlantic to further the availability of its hand sanitizer. Atlantic Bottling is distributing the product to all retailers across its territory, which spans the majority of Iowa and parts of Minnesota, Wisconsin, Illinois and Missouri.

Even companies whose primary business isn’t manufacturing have jumped into action.

Des Moines-based commercial construction contractor Ryan Cos. devoted a 3-D printer that its design department recently acquired into a 24-7 maker of “ear saver” devices. The ear savers take the weight off mask wearers’ ears to make it easier for health workers to wear them throughout their long shifts. Ryan’s 3-D printer produced 63 ear savers each 24 hours, said Brian Clark, director of real estate development. Ryan Cos. donated several hundred of those items to Broadlawns Medical Center in Des Moines.

In a similar way, Pella Corp. in Pella has programmed its 3-D printers to produce 300 face shields daily, which the company committed to distribute to hospitals in Marion County, Shenandoah and Sioux Center hospitals until demand was met.

“Producing face shields for health care workers was a great opportunity for the Pella team to turn passion into action,” said Nicolle Picray, brand communications and public relations manager. “We’re proud to help our local communities during this time of crisis.”

Another Central Iowa manufacturer, Engineered Plastic Components Inc. in West Des Moines, by mid-April produced about 20,000 face shields for health systems. Using a preliminary design developed by the University of Iowa’s UI Ventures innovation lab, EPC built its own injection mold within just five days. With its expertise, the company is in a position to mass-produce hundreds of thousands of face shields and could supply states beyond Iowa, EPC’s CEO said.

“Due to the current situation, we were not running some of our production ,and we wanted to make sure that if there was something we could contribute, we wanted to do that,” said Reza Kargarzedeh, EPC’s president and CEO. “We have produced around 20,000 so far, and we have basically given UnityPoint Health about 10,000 of those. There are also some that we have given to FEMA in Washington, Iowa. And we have donated some to senior housing locally. It’s been a good project.”

EPC is one of at least three Iowa manufacturers — along with Vantec Inc. and MD Orthotics — that collaborated with the University of Iowa’s UI Ventures innovation lab. UI Ventures’ team, in coordination with the Iowa Department of Economic Development, has been connecting manufacturers with UI’s resources.

UI Ventures worked with University of Iowa Health Care as well as UnityPoint Health to create and source PPE equipment needs for those health systems, said Jon Darsee, chief innovation officer with the University of Iowa.

“Our natural role is focusing on taking ideas and moving something from ideas and intellectual property out into the world,” he said. “And with this COVID crisis, we’re in a really good position because we can connect the internal players. For a face [shield] you may need the College of Engineering and the College of Public Health and then feed that to UIHC. It’s what we do, so it’s easy for us to play that role of putting the right sequence together internally and then go out and find [expertise] as necessary.”

The face shield project expanded beyond UI Ventures after Darsee approached Iowa Economic Development Authority Director Debi Durham about finding a faster technology for producing face shields than 3-D printing. Durham suggested that UI work with Vantec Inc., a Webster City-based injection molding company. “Within a week, Vantec created an injection molding for the halo, which is a major component of the face shield,” Darsee said. “And now we can pump out thousands of them.”

A key element of the project’s success, Darsee said, was a student-run program within UI Ventures called Iowa MADE, which as a U.S. Food and Drug Administration-registered quality system initiative can produce FDA-approved devices. “So we employed [Iowa MADE] in that situation, with [Vantec] manufacturing for us, and so now we’re rockin’ and rollin’ with face shields. It’s been a very positive experience.”