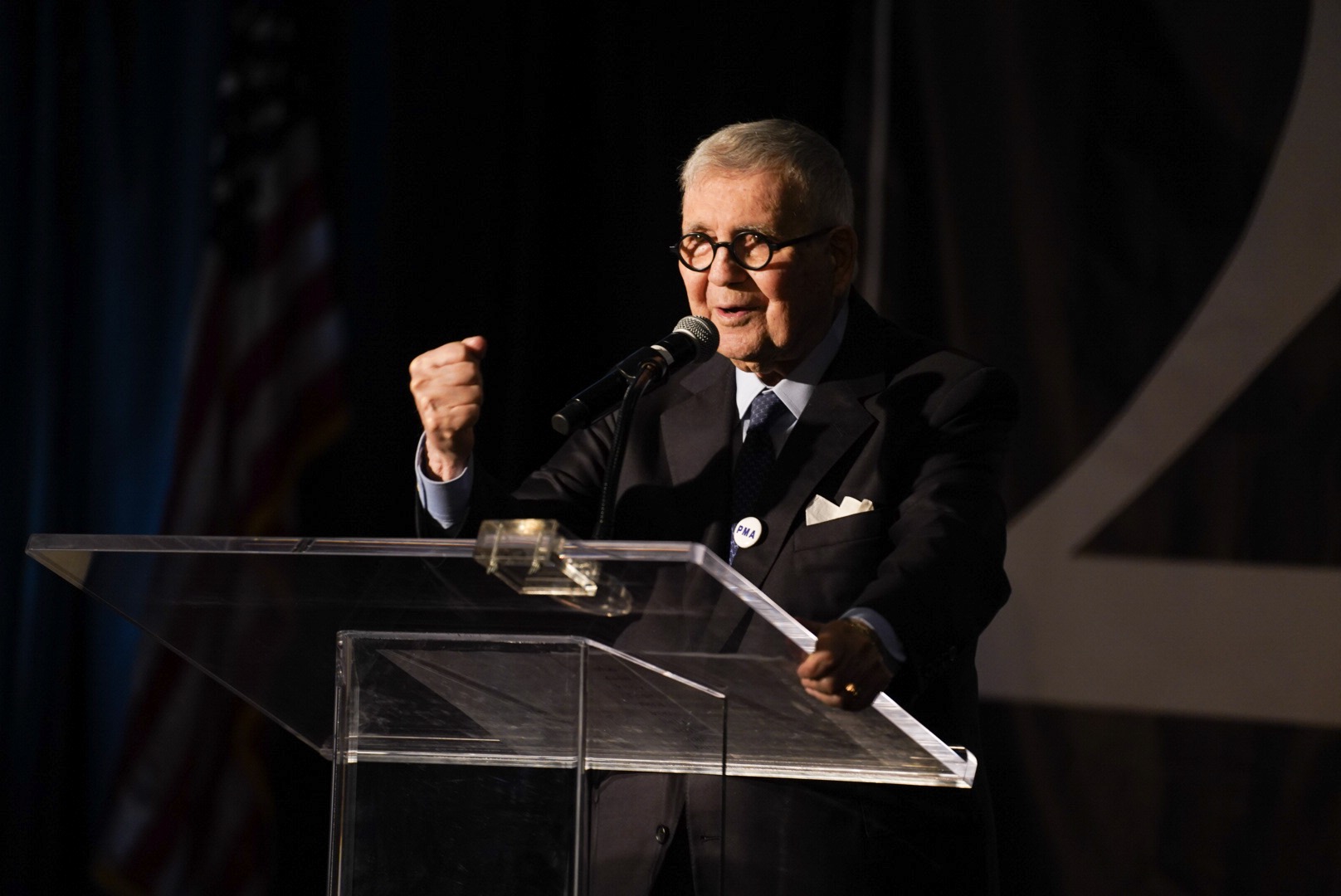 “I dream all of the time. I want you all to know that ever since I’ve been a little boy, I dream about things that I want to do. I would dream about making money and dream about giving the money away; I dream about helping people.”

Born in Greece and raised in Mason City, Pappajohn’s Depression-era upbringing required him to quickly learn independence and how to navigate adversity, instilling skills he would need for his entrepreneurial future.

After starting his own business out of college and later organizing Equity Dynamics Inc. and his venture capital firm Pappajohn Capital Resources, Pappajohn was prepared to act in 1996 when he first had the idea to start the centers.

The centers, located on campuses of five colleges and universities across the state, have since supported and fostered entrepreneurship in Iowa among students, faculty and community members with numerous programs, competitions and resources.

“Tonight one of my dreams came true,” Pappajohn said, acknowledging Iowa’s strides in entrepreneurship over the last 25 years.

A total of $25 million in funding from John and Mary Pappajohn has supported the centers throughout their lifetime, and at Thursday’s event John announced to the more than 300 attendees that another $10 million will be donated to the centers.

“This money is to perpetuate the growth of entrepreneurs in the state of Iowa, help young people learn how to make a living, help them to become smarter,” Pappajohn said. “I just expect that things will get better. We’ve come a long way, and another $10 million I think will help because we learned much by the time we got here.”

David Hensely, executive director of the University of Iowa JPEC, announced the Iowa JPEC’s Venture Mentoring Service at the anniversary event, which is launching as a pilot program at each of the five centers this fall. A portion of the $10 million donation will support the program.

Hensley said in an interview with the Business Record that the Venture Mentoring Service will connect early-stage companies with a network of Iowa’s serial entrepreneurs, business experts and investors. The goal is to unite the five centers around the collaborative program and to scale it statewide in spring 2022.

“Because we’re doing this through the five centers, let’s say there’s somebody in north-central Iowa who has a medical technology, they’ll be able to connect to the network through the University of Iowa and our medical school, our medtech entrepreneur venture programs,” Hensley said. “We’ll be able to connect entrepreneurs from anywhere across the state to the best talent that we have access to.”

Hensley said the centers will use a hybrid model, allowing them to widen their pool of mentors even if they are out of state. The JPEC mentoring program is based on the Venture Mentoring Service at MIT — Pappajohn center staff members received training this summer from MIT in preparation for the launch.

Among other highlights from the event were speeches commemorating the anniversary and honoring the Pappajohn’s legacy from IEDA Executive Director Debi Durham, former Gov. Terry Branstad and Gov. Kim Reynolds, who ended her remarks by signing a proclamation designating Sept. 23 as John Pappajohn Entrepreneurial Day in Iowa.

The nine finalists of the Pappajohn Iowa Entrepreneurial Venture Competition were recognized and received their awards, with Ames-based Skroot Laboratory Inc. winning the first prize of $40,000.

Skroot is a biotechnology company whose main product is a wireless sensor that aids pharmaceutical manufacturing, particularly in the area of cell and protein therapy development. Founder and President Nigel Reuel, pictured at right holding the check, said Skroot’s technology negates the need for manual sampling to check the progress of cell growth, as the process risks introducing bacteria and disrupting the experiment.

Reuel, who is also an associate professor of chemical and biological engineering at Iowa State, said after experience with the pain point as a grad student at MIT and doing related research with his students, he saw a need for Skroot’s technology that he couldn’t ignore.

Skroot entered the venture competition last year and received an honorable mention. The team has received federal funding from the National Science Foundation and others, but Reuel said the winnings from this year’s competition will help propel them forward in new ways.

“The type of funds that John Pappajohn provides are helpful in terms of doing things like customer discovery and being able to maybe expand our product line beyond what we’re currently working on,” he said. “I think also just the publicity and presence that it brings [helps] because we’ve largely run on a shoestring budget. But before Thanksgiving, we want to raise a bridge round, so we have an opportunity for others to take an equity stake in our company. For this first-time offering, this allows people to know who we are and have a stamp of validation, which is great.”

Prior to the Pappajohn centers launching in 1996, entrepreneurship was not on the radar of many public and private organizations in Iowa. There were few educational opportunities, and resources were more focused on developing existing businesses and attracting new ones to the state.

“Even the term entrepreneurship wasn’t really part of the standard vernacular,” said David Hensely, executive director of the University of Iowa John Pappajohn Entrepreneurial Center. “On most college campuses there might have been a class or two in entrepreneurship, but there certainly weren’t full academic programs and co-curricular programs.”

Hensley left the state after graduating from the University of Iowa in the late 1980s because of the lack of opportunity at the time. But upon his return, some recognized the need for an interconnected ecosystem of resources in order to support entrepreneurship.

“People started to realize very quickly that it can’t just be about trying to attract businesses to Iowa for economic development. We have to grow within, we have to start to build to grow. … We needed something to jump-start the ecosystem, and it was the creation of these centers,” he said.

The centers’ impact started with educating students and telling them that entrepreneurship was an option, and over 25 years has evolved into the ecosystem Iowa knows today.

Hensley said as they have grown, the entrepreneur and startup communities in Iowa have built on what John Pappajohn started with the centers. The development of incubators and accelerators across the state is one way entrepreneurs are using the existing ecosystem to move it forward.

The other marker of success of Iowa’s entrepreneurs and the JPECs is that “high-potential” companies are starting in or coming to Iowa, Hensley said.

Attendees of the Pappajohn centers’ 25th anniversary event heard the story of an entrepreneur from each of the five centers, including Spencer Stensrude, CEO of Ag Ventures Alliance. His association with the NIACC Pappajohn center stretches back to his middle school years when he had an idea but no one else to help him with it.

He has attended the NIACC JPEC’s Youth Entrepreneurial Academy program, participated in the business plan competitions and been a mentor to other businesses.

“What all of these things did, though, was to cement my belief that there has never been a better time in the history of humanity where you have more opportunity to be successful. … As long as you are in it and try, you have a better chance than you ever have before,” Stensrude said in his speech Sept. 23.

Hensley said 25 years ago, Iowa was largely seen as an agriculture-focused, “meat and potatoes” economy. Now agriculture remains a foundational industry, he said, but with more influence from the entrepreneurial community.

Ag Ventures Alliance currently has 30 startups in its portfolio that all tie back to helping increase farmers’ profitability.

Stensrude said in an interview that throughout his five years working for a venture capital firm, he has seen Iowa growing because of the state’s “natural advantage” in the industry with a presence from many major ag companies and strong universities.

In a sector that may seem overwhelmed with big companies, startups have speed and agility on their side, Stensrude said.

“At some point, large companies just can’t move as quickly, and by the time you might get a new product approved and start working on it, a small team might already have the product built and being used by customers,” he said. “This isn’t unique to agriculture, but small innovative teams have an advantage in building new technology.”

Looking forward, AI, cryptocurrency and blockchain are technologies Stensrude said we will see more of from agtech startups. He also hopes to see development of venture capital opportunities continue that will in turn support Iowa’s startup ecosystem.