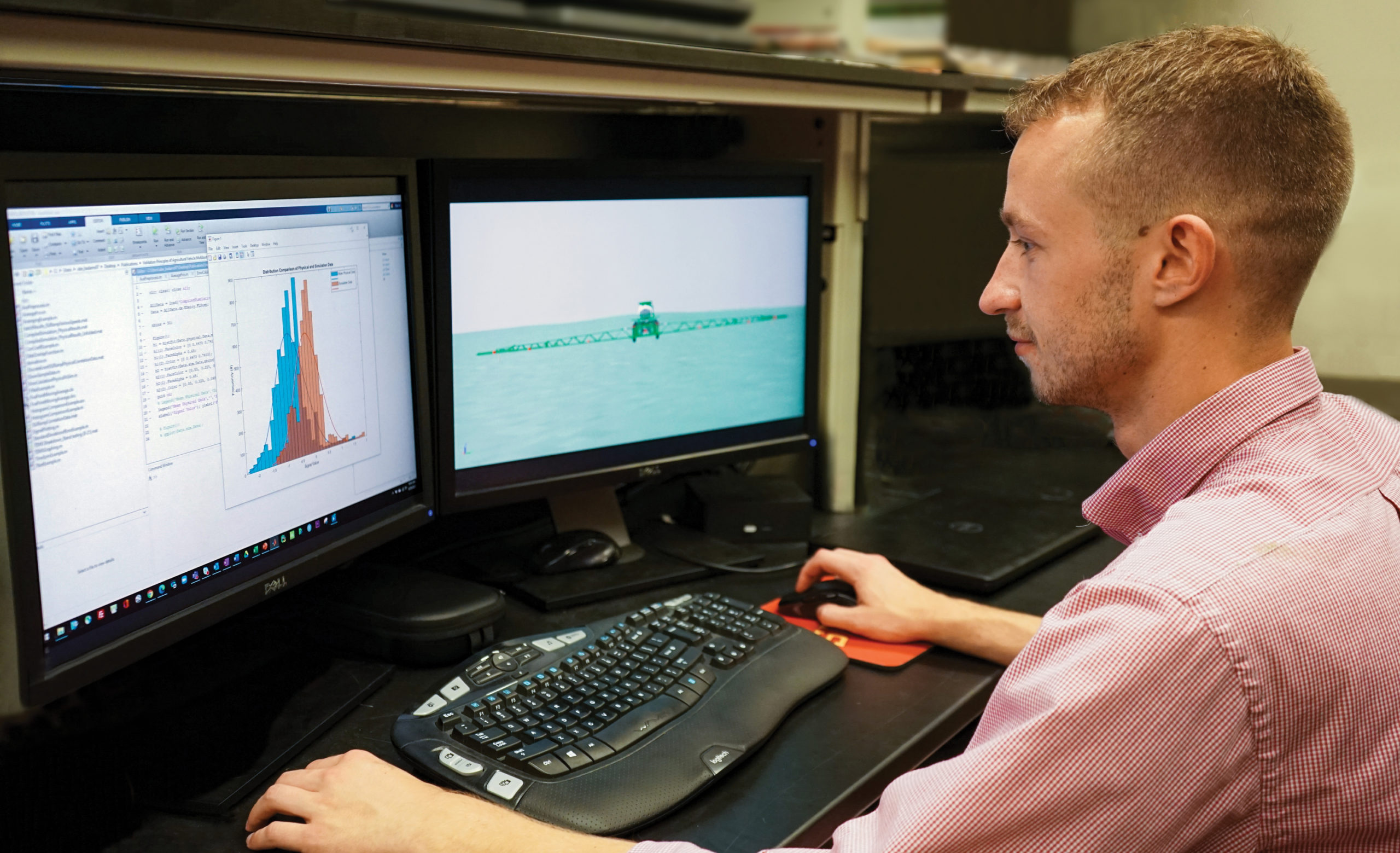 Nestled in Iowa State University’s BioCentury Research Farm west of Ames is a group of researchers who are focused on helping agricultural companies succeed.

The university’s Digital Ag Research Team, led by Matt Darr, partners with companies to advance technology used in the field. The team, composed of more than 50 faculty members, staff members and graduate students, also serves as a talent pipeline for companies seeking employees who are skilled in the tech sector, said Darr, a member of the ISU faculty who also teaches ag engineering classes.

Darr said the group does the work because it’s important to Iowa.

“If you look at the landscape, we are agriculture here in the Midwest,” he said. “We have a number of companies that are heavily invested in making ag-based products, and we believe Iowa State can play a role to make sure those companies are successful.”

Darr, who moved to Iowa from eastern Ohio 14 years ago to head the group, said industries’ ties to universities have traditionally been a place to do early, exploratory work, where there would be research but not a lot of development. The ISU Digital Ag Research Team wanted to change that, he said.

“So we raised our hand very early on and said, ‘I think we can do more and we can be different, and Iowa State is ready for that [because] we’re willing to be flexible on [intellectual property], and how we commercialize things in a way that doesn’t have a lot of hooks tied back into [a] company trying to make business decisions,’” he said.

The result has been a testament to “a great vision for how to work with companies, how to focus on innovation, how to focus on product development in a way that allows us to build better students that are enhancing the workforce in Iowa as well as delivering real products to the market,” Darr said.

He said the Digital Ag Research Team’s mission is to offer innovative solutions to the economic, sustainability, social and environmental pressures that commercial agriculture is facing.

“We develop technologies that help producers do things smarter, sometimes more automated, sometimes more efficient, but it’s all about how to infuse sensing and technology into ag systems,” Darr said.

He said the group measures its impact by economic development and whether it helps the industry and the companies who are major economic drivers in the state.

“We want them to be successful,” he said. “If they’re successful, they are going to want to hire more people. And as a state institution, we want to make sure that students come to Iowa State and have an opportunity to get a job in Iowa. That’s creating opportunity in our little microcosm of the world.”

Another gauge of success is the development of partnerships that get technology in the hands of customers who can see the effect it has on their operation.

Darr said the university has patents on 29 technologies that his group has worked on that are sold today.

Examples of technology the Digital Ag Research Team has developed include moisture sensor technology for the cotton industry that helps producers pick cotton before moisture levels get too high, requiring drying and dying, which would add costs to the producer.

There was also the development of a sugar cane yield monitor, developed in a partnership with Deere and Co. and Carnegie Mellon in Pittsburgh. It remains the only commercially available yield monitor for sugar cane.

The Digital Ag Research Team has also been involved in the development of combine automation, cameras that measure the different parts of grain, and a product that calibrates a combine for yield so producers don’t have to stop to do that.

There’s been forage harvesting equipment and advanced spray system programs by John Deere that reduce herbicide use by up to 80%.

“We don’t have a litmus test that has to be a tractor that will sell a bajillion a year for us to get involved. We’re engaged in technology in the entirety of agriculture,” Darr said.

He said his team credits the partners they work with in the development and commercialization of technologies that make it to the market.

“We’re involved in core technology development, but our partners are also very involved in the commercialization part of it,” Darr said. “We work with teams of engineers, with our industry partners, to get these things to market.”

Bailey Adams, a graduate student who recently successfully defended his thesis and joined ISU’s Agricultural and Biosystems Engineering Department after graduation, has worked with the team for the last couple of years. He said the broad spectrum of tech development is what makes their work different.

“Our company sponsors are trying to get smarter when it comes to development, how you can improve efficiency, reduce physical prototypes and what sort of systems or software techniques can do that,” he said. “So we try to rely on virtual modeling to develop new control software systems or experimentally test new mechanical design concepts and help drive the development process and collaboration with our sponsors early on in the process.”

Partner companies come to the Digital Ag Research Team with projects of different scopes, some with a clear definition of what they want, others needing more thought on how to solve a problem, Darr said.

Throughout the process, ISU researchers work alongside their peers at the companies to meet their innovation needs, he said.

“Sometimes we’re just helping the partner because we have capacity and they need it,” he said. “Other times we’re taking a larger role in the intellectual contributions, the thought leadership that goes into that work. They know we’re not here to compete with them. We’re here to help and lean in as a state institution in the way that we can in that space to help them be successful.

“When a company engages with us, they expect us to really put thought into what’s the right way to innovate and solve that problem,” Darr said. “Not just do what we’re told but lean in with our thought leadership capacity to make that work.”

While Darr is a full-time faculty member paid by Iowa State, the rest of the staff’s pay is supported by the companies the team partners with.

“Those were careers generated by the work we do,” he said.

Darr said his team’s connection to the ISU College of Agriculture and Life Sciences, its Ag Engineering and Fossils Engineering programs, and the ISU Research Farm helps keep it connected to the state’s agricultural community.

“We develop technology and then we prove it in the Iowa landscape,” he said. “That ingrains in us an understanding of the challenges and the needs that farmers have today, and it empowers us to be able to take ideas forward to the partners we work with and pitch them on concepts.”

Alison Doyle, chief relationship officer and director of business engagement at the Iowa State University Research Park, which works closely with Darr’s team, said she’s seen a shift in what companies are looking for when they visit.

It used to be that equipment and research infrastructure needs made up 95% of all inquiries, Doyle said. Hiring wasn’t a priority, she said.

“Now it is the exact opposite,” Doyle said. “[A company might be] switching from being an ag company to being a data company. That is kind of industrywide in ag, and [they] need help not only figuring out how to do that, but they have a people problem and know it, and that this is a place where [they] can catch those people.”

Doyle said the Digital Ag Research Team has been a major influence in the university’s economic development strategy.

“If you look at their relationship with Deere, Deere is here because of this research,” she said. “Deere is a model nationally for how to do business with a university, and they’re by far our biggest partner for hiring talent, for economic development, for research and development projects. We hold up the relationship Iowa State has with Deere as kind of the secret sauce.”

Adams said the need for talent has maybe been the biggest development in ag tech in the past few years.

“Just that push and need to help develop that talent,” he said. “What does that pipeline of students look like, students who are really well rounded in this technology space, this data space, comfortable with the systems we work with? It’s just that push to keep talent in Iowa. There’s just a huge push constantly for that pipeline [of] students.”

What development in agriculture will the Digital Ag Research Team and its partner companies be closely monitoring in the future? Darr said it will likely be carbon markets and the role his team can play in helping companies achieve their sustainability plans.

For example, innovations in spraying technology and planter automation that helps plant cover crops can be part of the sustainability solution rather than historically being considered part of the problem, he said.

“There isn’t a company we work with that doesn’t have a sustainability plan,” Darr said. “Several companies we work with are putting them into action. Some of them are leveraging us. Deere and Iowa State established a sustainability demonstration farm last year. We’re being very public about the use of technology in its role in helping with our global sustainability. So we think data information, technology automation, can be part of the success story in climate.”