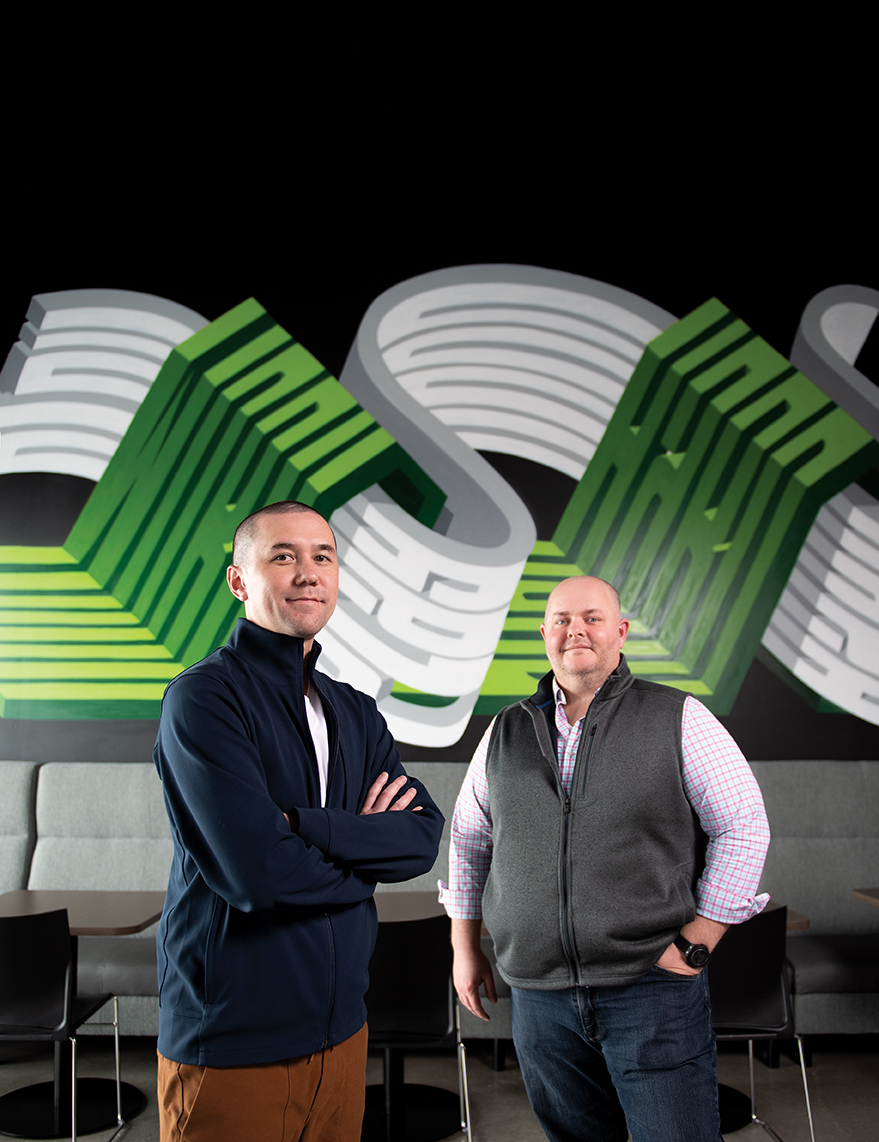 The vast majority of employees — more than 9 out of 10 — working at VizyPay had no previous experience in the credit payments industry when they were hired at the fast-growing, Waukee-based financial technology company.

But they all have some degree of what co-founder and CEO Austin Mac Nab refers to simply as “grit.” A positive attitude. Wanting to prove themselves. Eager to shake things up. Maybe a bit of a chip on their shoulder. Definitely not wanting a steady 9-5 job.

When candidates come in for an interview, “I won’t look at their resume — I don’t want to prejudge that person,” Mac Nab said. “I want to get to know that individual. So my initial questions have zero to do with their business experience — that’s like the last part of what I talk about.”

At the company’s headquarters in Waukee, VizyPay’s collective grit was on display through a nearby glass window looking out from a conference room to a high-energy customer service area. There, VizyPay workers wearing headphones were on calls with clients and independent sales representatives across the country, hustling to keep customer wait times less than 30 seconds and usually averaging about half that wait time. Even through the glass, there’s a sense of collaboration and positive energy in the room.

The payments processing company, bootstrapped in 2017 by Mac Nab with his next-door neighbor Frank Pagano, last year was recognized by Inc. magazine as the No. 45 fastest-growing company in the United States as part of the annual Inc. 5000 list.

As a small startup company, VizyPay has also made an intentional effort to hire employees from diverse backgrounds. In its fifth year of operations, the company surpassed 85 people on its payroll. In an industry that’s dominated by white males, VizyPay has assembled a team in which 1 in 3 employees are women and 70% are of an ethnic minority, among them Mac Nab, whose mother is Vietnamese.

Company culture is VizyPay’s top priority, “our No. 1 why,” Mac Nab said. “Accountability, taking action and being very aware of bringing in people from outside the payment space and being diverse — that’s very important to us.”

In 2021 the financial technology company processed more than $1.2 billion in credit card payments nationally, and this year is on pace to double that figure. And in an economy where finding workers is a challenge, VizyPay was by early spring adding employees at a rate that’s expected to top 120 people at its Waukee headquarters by year-end.

VizyPay’s niche market is made up of the small to medium-size, often family-owned businesses that can be found in rural communities across Iowa and the country. “There are still towns in small-town America that use dial-up internet, and in our space, it’s the same concept,” Mac Nab said. “We’re trying to level them up from the technology they have now to keep up with bigger cities across America.”

Their customers range from businesses in other mid-tier cities such as Bismarck, N.D., Rapid City, S.D., and Cedar Rapids, Iowa, with retailers that are ringing up an average of 25,000 card transactions a month, to smaller customers that may handle just 10,000 a month.

“If you think about the types of organizations they run, say Joe’s Auto Repair, Joe is probably turning a wrench when he needs to,” Pagano said. “They probably don’t have a CFO to look over a [card processor] statement, which is super-confusing, generally speaking. … The way that we’re disrupting isn’t necessarily just through technology. … I think it’s looking out for them by keeping our rates stable, by not raising rates every time they turn around.”

The company operates with a network of more than 700 independent sales contractors across the country, giving it a national sales footprint. In the first half of 2022, VizyPay was in the midst of a hiring spree, with plans to add payroll employees across eight states beyond Iowa.

Three of VizyPay’s most recent hires are moving to Iowa from outside the state, Mac Nab noted, including one from California, another from Florida, and a third from Tijuana, Mexico.

VizyPay charges a flat monthly subscription fee, and through a cash discount program it offers to retailers, the company has returned more than $25 million to its small business customers since its launch, a figure that continues to increase every day, Mac Nab said.

“Imagine what those merchants can do with that money,” he said. “As you can tell, we’re very passionate about small business owners, because I’ve seen them get absolutely hammered for 18 years and they still as of today are getting hammered. We just happen to be the individuals that are standing up for them, I think in a bigger way than normal people. And we happen to be doing it in Iowa.”

By conventional measures, the company isn’t turning a profit — but that’s because it’s plowing money back into the business, Pagano said. He added that the operational strategy of running a tight budget in no way affects the stability of the company’s funding mechanism for handling retailers’ credit processing needs, which is funded through Wells Fargo.

“We try to run our [profit margin] close to zero, and, you know, not because it’s the most comfortable place to live,” Pagano said. “It’s because we know that it’s necessary to grow the company at the scale [needed]. … Let’s shake things up a little bit. And let’s provide opportunity, let’s be an exciting place for everyone to work; let’s be an exciting place for our business partners.”