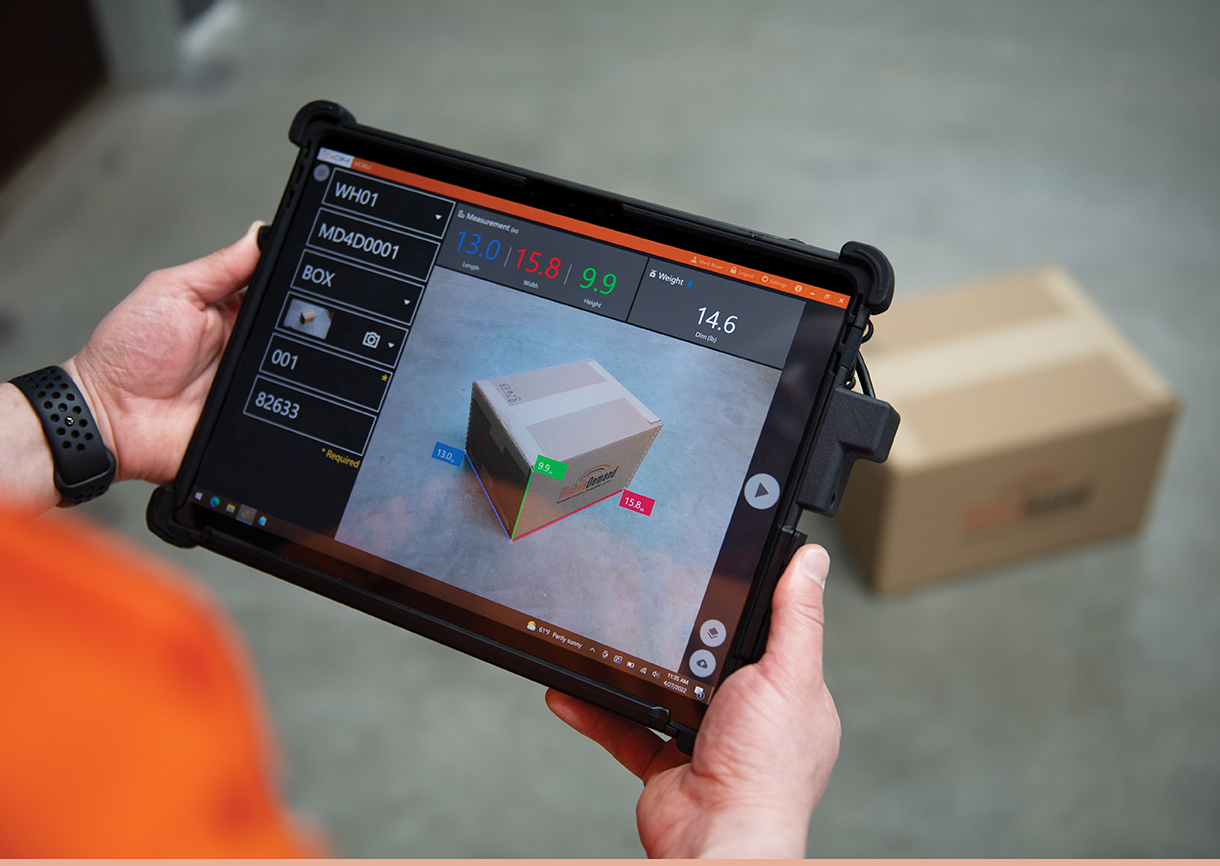 An emerging software designed to save space and time in warehouses

Since starting his first company creating patented durable tablet cases for workers and workplaces on the move, University of Iowa alumnus Matt Miller always knew a software venture would be in the future. That venture is 4DMobile, Miller’s new business that has for the last six years been working on research and development for its xDIM Mobile Dimensioning System.

The software application streamlines warehouse and distribution management by scanning and measuring a box’s dimensions to within a half-inch of accuracy in a matter of seconds. When overseeing the storage of potentially thousands of products, this quick scan saves time and warehouse space that is often wasted by trying to find the best way to organize.

“Even today as we’re talking with many major companies that are very innovative, they still have a huge problem of utilizing the space in their warehouse as efficiently as they’d like,” Miller said.

In 2021, the software was deployed for beta testing at several companies in Iowa and beyond, and 4DMobile’s first customers were brought on in the second half of the year.

Putting the software on tablets that have a 3D camera makes the whole process mobile, compared with competing fixed dimensioning systems, which require the additional work of shuffling products around the warehouse.

Miller compares the aim of 3D mobile dimensioning to that of Tetris: “It’s basically fitting where things are going to be put together without wasting any open space at all.”

Traditional manufacturers and logistics-focused companies are obvious customers for 4DMobile’s software, but any industry that requires distribution or warehouse management can benefit.

A food service distributor has tested the system, and traditional retailers and the University of California library system have expressed interest, Miller said.

Based in the Cedar Rapids suburb of Hiawatha, Miller said 4DMobile is looking at 2022 as a “growth year” to use the feedback from customers to improve and add to the application’s functionality and introduce new businesses to it.

The following Q&A is with Miller, president and chief technology officer of 4DMobile. It has been condensed and edited for clarity.

Envision a tablet. Similar to … taking a picture with a cellphone, it could be a larger or smaller tablet that’s got a 3D camera on the back of it and a viewfinder on the screen would be taking a picture, but it’s more three-dimensional. The overview is that it looks at the 3D space that’s in front of you, it does a little bit of sensing the planes, which are flat surfaces, basically. What we’re doing is searching for a box. So it’ll find flat surfaces and it’ll find flat surfaces that are orthogonal to each other that are basically a corner.

We tell the users to face a corner of the box towards the camera so that it would be able to see the three front corners and then the three planes that make up the top, left and right of the box. So it’s looking for something that looks like a box in the scene. It does the segmentation to say, well, I’ve found something that looks like a box here, and then it’s able to go through multiple types of technologies to refine it and say, OK, we think we’re good, and then start taking some measurements of the surfaces.

We use an Intel camera and we get about 8 billion data points per second. We managed through the software to do the identification and measurements frame by frame, like video. It could be six to 20 frames per second that we’re evaluating each frame, searching for a box, finding the box and then doing the measurements.

The goal that 4DMobile’s technology is achieving could have incorporated artificial intelligence. Were there benefits to creating the technology without AI?

AI has to have something to learn from, and learning probably means there’s a standard to it. One of the things that we do internally to test the accuracy is pre-measure boxes, so as you can imagine, we’ve gone through tens of thousands of boxes that we’ve scanned, and a lot of the boxes last year were scanned by myself starting at 4 o’clock in the morning, or 3:30 in the morning, in my garage scanning, scanning, scanning, and you know, get five scans of a box, turn the orientation, scan it again, turn the orientation, scan it again five more times, and then move on to the next box. So we have a set of about 75 boxes that we have pre-measured, so we’ve done it by eyeballing ourselves what the measurements are. AI would have to have some level of input to say, “Am I smart enough to be able to say what the dimensions are?” AI would be good for recognizing in a scene what a box is, but it would have to have some additional input to measure a box’s dimensions.

Could AI play a role as 4DMobile’s application evolves?

We’re definitely looking at AI to help refine things. We have a lot of additional innovation in mind, not only from recognizing but then also there’s a lot of cues in the scenes that can say, this is a box and this is the orientation of the box, or what is the product on the box, finding logos and things like that to help identify as well. So there’s lots of opportunities. Maybe a tag showing a package contains hazardous waste or corrosive materials so that it could identify that this has a hazardous factor to it, and it would tag it in the database as well.

In the five years of research and development on the mobile dimensioning software, what was 4DMobile’s biggest challenge?

I think the biggest challenge that we faced was the evolution of the 3D camera hardware technology. Waiting for the right camera technology that would be able to allow us to develop a system that would be accurate enough and fast enough to be able to deploy for the market. We’re not relying upon anybody, so it’s all inventing and innovating ourselves, so there’s a lot of whiteboard drawings going on, a lot of back and forth, brainstorming, encountering problems. Even with the cameras that we have today, we’ve found it’s not perfect data by any means, so we have to wrestle with that imperfection and all. Also, lately, as we’ve been trying to add staff and software programmers, we have had trouble finding software development talent locally here and interviewed a lot of people, and for one reason or another they haven’t panned out, so it’s been a difficult process to add software talent.

How is 4DMobile addressing the current staffing challenges?

We’ve kind of always thought that we’d like to have the people in our office working. There’s a lot to be said about collaboration and getting to know people, especially in a small company, but we’ve definitely changed our mindset a little bit just based on the scarcity of people to say, OK, now maybe we can hire somebody from Austin, Texas, or Raleigh, North Carolina. I think it’s still ideal to have people here, but we’re definitely looking elsewhere now for hiring.

Competitors offer dimensioning services, but 4DMobile’s technology bypasses some of their inefficiencies. How did you navigate the development of a new technology when you didn’t have a precedent to go on?

I think it’s always been not too difficult for us because of our innovation with MobileDemand having the hardware patents, so it’s kind of similar with the software development. We just took the challenge that we know that the market says these fixed type of dimensioning systems just are not working for them, and they needed to have mobile. I think it’s an innate sense of innovation that’s within the company that we really strive for. And that’s probably natural for me as the leader as well, is to always think out of the box, always think about how we can solve problems on our end and have the goal that we’re really doing some really neat stuff.

What is ahead for 4DMobile in the next year?

We’re taking a lot of feedback from customers as we’re in the early stages of deployment. We’ve got a lot of challenges for, as you can imagine, the systems we have to interact with. The systems that have to interact with our dimensioning data are complicated, large-scale warehouse management systems or product information databases. So we have to focus on getting integrations so that, say, when somebody is doing the dimensioning, they can integrate and it automatically gets updated into their databases. The big challenge for this year is going to be sales and marketing. So getting the word out, going to trade shows and getting awareness among other companies for the sales and marketing opportunities, I think is the biggest thing.