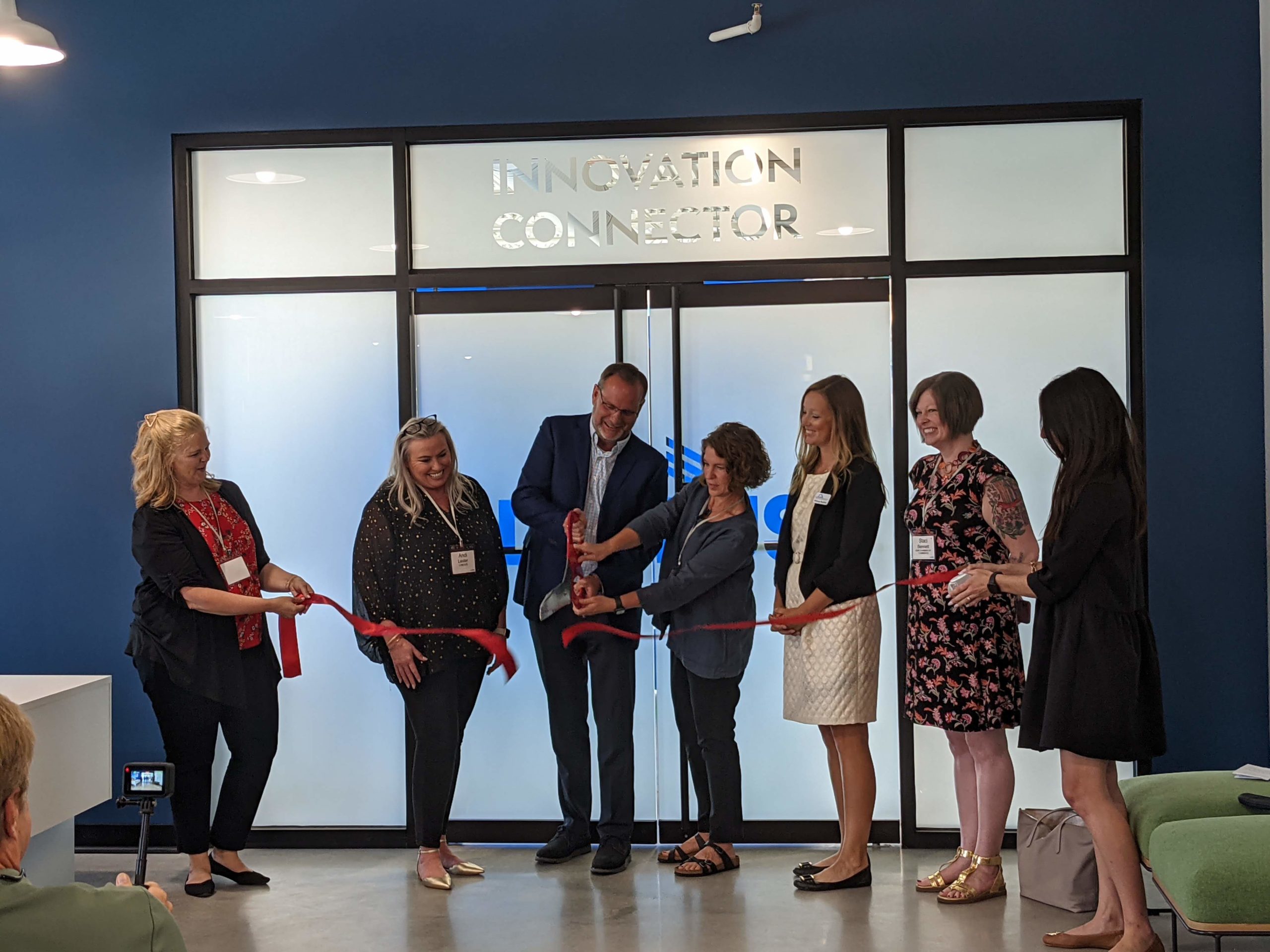 Landus brings the farm to the city with DM Innovation Connector

The “Tech takeaway” is a new feature in the innovationIOWA newsletter that will summarize the key information from our main story and offer insight into the Business Record’s reporting. Feedback and story ideas can be sent to Sarah Bogaards at sarahbogaards@bpcdm.com.

Landus Cooperative’s new Innovation Connector creates an opportunity to foster agricultural innovation in a way that is accessible to local, national and global companies and serves as a new resource to one of Iowa’s key industries.

In the heart of downtown Des Moines, Landus Cooperative has established a touch of rural Iowa and farms with its new Innovation Connector.

The space, located on the third floor of the building at 220 S.W. Ninth Street (pictured here), is a move by Landus to connect farmers with the innovations they need to respond to a changing agricultural landscape. Approximately 7,000 farmer-owners across Iowa own the state’s largest grain cooperative.

“It’s no longer we sell them their inputs, we buy their grain back, and we’re done,” President and CEO Matt Carstens said in an interview with the Business Record. “That doesn’t happen anymore.”

At a biannual event — held in the summer and winter when farmers are less busy — the connector plans to draw at least 1,000 farmers from across the state and innovation partners from around the world to Des Moines to foster innovation on Iowa’s farms.

With the announcement of the connector’s launch, Landus also named the first set of innovation partners, including local names like Sukup Manufacturing and ChopLocal as well as international companies Yara and AGI.

The partners attended the launch event on July 12 to meet with farmers and pitch their products. Jamie Schechinger works for crop nutrition company Yara from southeast Iowa to supply insight about the corn market. She said Yara’s international presence helps her find new ideas that could apply to Iowa farmers and learn about problems others are facing that Iowa should understand.

“Other markets and other people, they ask different questions … so it’s very interesting to learn how we bring those questions back to Iowa and [ask] what questions are we not asking?” she said.

Carstens said innovations for farmers today need to encompass everything from products and farming practices to technologies and connections that can help farmers with finding funding, which is why the innovation partners will change regularly. Another part of the Innovation Connector’s farmer-centered approach is letting farmers decide what fits their farm.

“We’ve got to bring the farmer, put them in the center and get them engaged in a way that they can relate and go home and go, ‘Well, I’m thinking about buying a new sprayer, but I saw some things on drones,’ and how might that change that purchase?” Carstens said.

“Every farming operation is different, just like every business. Our job as the company they own is to put them in the center and let them get a sneak peek to see that and let their mind go where it needs to go and bring that to real life.”

Carstens said just because downtown Des Moines has a skyline instead of rolling fields doesn’t mean the presence of agriculture is absent among Des Moines businesses.

Right outside the connector’s windows, he said, there’s Nationwide providing insurance to Iowa farmers and Principal managing benefits for Landus employees, and startups as well as Big Tech companies have a role in the cooperative’s mission to “feed, fuel and provide data to the world.”

“This is open for everyone. Although there’s an ag-heavy focus, it’s really a focus about the consumer and anybody that wants to play in that farm-to-consumer space,” he said.

When the connector is not hosting farmers and ag companies, Landus will use it to connect with the community, state government and possibly students, to teach them more about food production and agriculture.

Landus tested an Innovation Connector last year at its location in northwest Ralston, which fit the “rural heritage” of Landus, but when deciding where to build the concept, the farmer-owners and Landus board members knew it needed to be central and accessible.

“Innovation in Iowa does start in the major cities, whether it’s Des Moines or Ames at Iowa State, or even the University of Iowa. That’s a starting point for this,” he said. “We’ve got to recognize that if you really want to play in the space, you’ve got to get where everybody can congregate.”

Partners are recognizing and inquiring about opportunities for other forms of the connection in the space like putting offices in the facility.

“We’re less than five minutes from an international airport. Let’s open up those lines of communication, get those companies here,” Carstens said. “What this could mean for our state, I don’t think we’ve even scratched the surface — for startups, for major companies.”