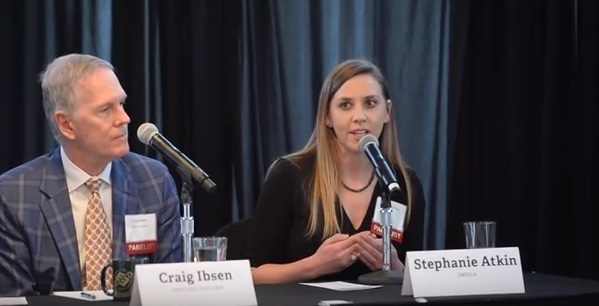 Who in Iowa gets to be innovative?

Des Moines talks a big game about Iowa being an innovation state, but at Thursday morning’s Business Record Power Breakfast, one audience member wondered: is this true in rural communities?

“One of the reasons Iowa is underrepresented is because we have a rural population that is disproportionate to the rest of the United States,” said Craig Ibsen, Managing Principal at Next Level Ventures. “The vast majority of venture capital is going to urban areas. And speaking as an investor, I see most of the dollars flowing into the Ames-Des Moines, Cedar Rapids through Coralville-Iowa City corridors, and that is a challenge.”

“If you don’t have broadband of any significant speed in rural Iowa in certain places, you know, you’re as lost as if you didn’t have a road,” said Jeff Russell, president and CEO of Delta Dental of Iowa. “How do you have broadband in rural Iowa so that when these kids go to college, they want to come back and start a startup business in these small towns?”

Rural broadband is one of those issues that gets murmuring around city councils and a few shout-outs during political campaigns, and yet the topic never seems to hit ground level in a significant way. Columbia Journalism Review, a media industry trade publication, ran an Iowa writer’s piece on meaningful high-speed broadband as part of the 2018 underreported State of the Union series.

“It’s not there, frankly, and I think until we get that there’s no chance of really significant investment even in a business that’s not a tech business or a software business,” Russell added. “It requires that you have connectivity to the world. I think we can do a better job.”

“Broadband is the 21st version of roads and ports in the 19th century,” he added.

“Since 2009 to now, since I’ve been back, Des Moines has grown a lot. It’s grown at the expense of rural Iowa,” Wood said. “We’re not necessarily growing as a state, we’re just importing from all these rural areas.”

“I think what we all need to do is go out to those underserved and underrepresented communities and do more with them, and help them know that this is a place where they can have access to you and encourage them,” Wood added later.

“Always, my flag is for small business,” said Megan Milligan, president and CEO at the Iowa Center for Economic Success. “If we’re going to bring in all these amazing companies and keep them here, we have to make our main streets more interesting.”

After the panel, the Business Record asked Milligan why she thought Main Street businesses and tech companies are closely intertwined.

“It really is that chicken-and-the-egg. If we had cooler things to do or cooler jobs to have, maybe more people would move to those communities, and some people would actually stay in those communities. But we have to get somebody that’s willing to say, ‘OK, I’m really committed to the outskirts of Spencer, Iowa. I really want to stay,’” Milligan said.

Iowa’s government needs to support those businesses with tax incentives or grants, she added.

“What are we doing to incentivize these smaller towns? They’re not all farmers, they’re not all bakery owners, and even those that are, farmers are probably the most experienced entrepreneurs we have,” Milligan said. “Where’s the capital to help them get going on that?”

What’s a B Corp or benefit corporation?

“As far as people starting businesses that have a more altruistic mission – I know a couple of [benefit corporations] that are located here, but they’re organized in Minnesota because they allow that and we don’t,” noted Geoff Wood, founder of Gravitate. “So those of you that are into the lobbying and have connections, may want to pursue that … and get a path like that to get more people who are starting entrepreneurial initiatives to think more with an altruistic vision.”