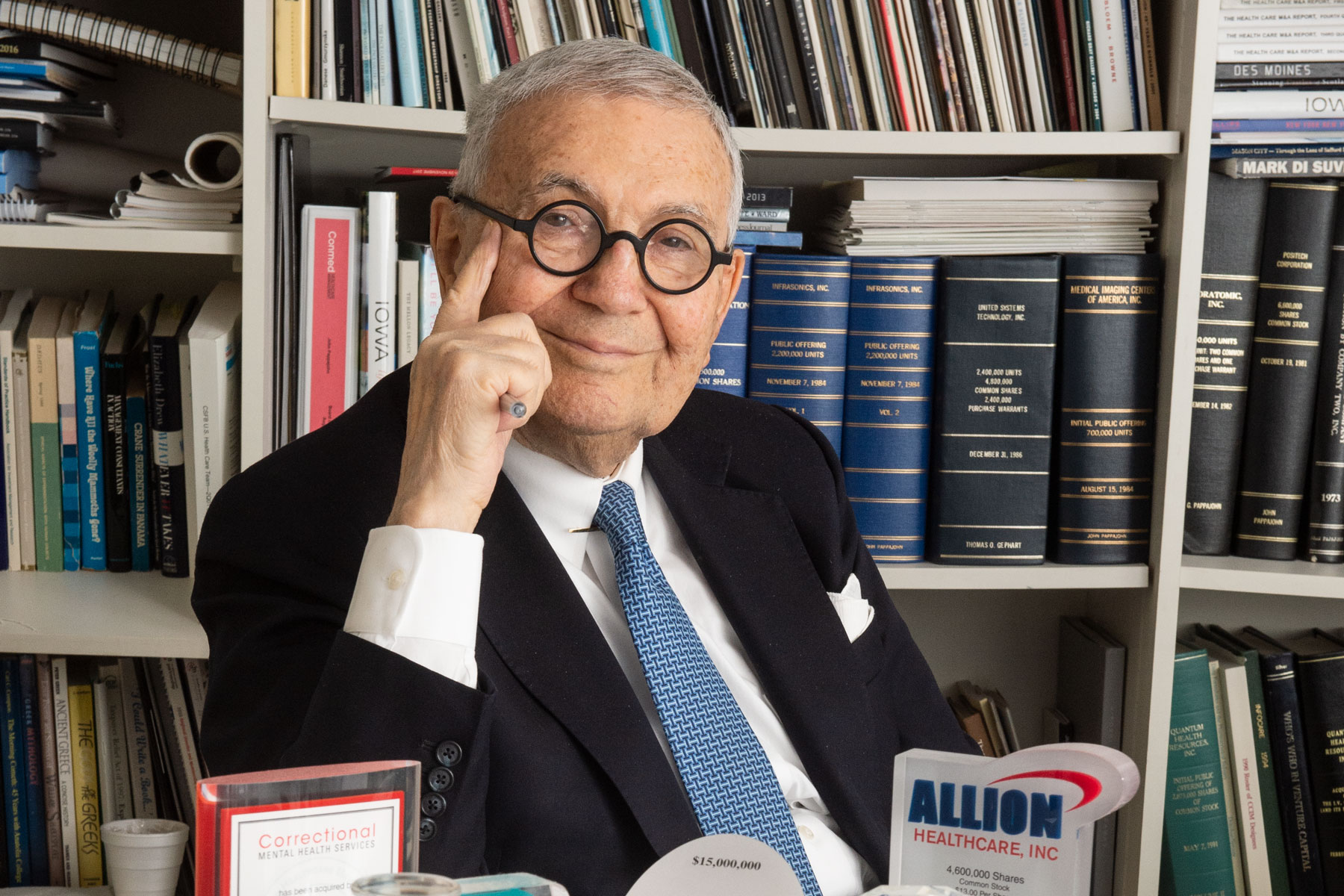 In his 50th year as a venture capitalist, Pappajohn is still ahead of the pack

John Pappajohn has invested in innovation from the very beginning of his career as a venture capitalist, and he prides himself on keeping himself — and his investment network — on the leading edge of technology.

Some of his earliest deals involved the use of advanced technologies years before they became mainstream — among them artificial intelligence, advanced medical devices and video-streaming technologies.

Some of the startups in which he was an early investor took off and then were acquired by major companies such as 3M Corp. and Caremark, while others anchor homegrown Iowa-based companies with national reach like Syncbak, a Marion-based company that pioneered a live-streaming technology for platforms like CBS All Access, Hulu, Amazon and the National Football League.

Pappajohn believes that his greatest legacy in the state of Iowa is the ecosystem of innovation and entrepreneurship that he helped build from the ground up by creating and funding his namesake John Pappajohn Entrepreneurial Centers. He has personally contributed more than $23 million to launch and sustain the network of centers located at higher education campuses in Mason City, Des Moines, Ames, Iowa City and Cedar Falls, and he has committed to contribute $10 million more, he says.

Pappajohn, an energetic 90 years young, spends the winter months at his Florida home in Naples. But he’s not lounging by the pool or even on the golf course. He’s working at his desk in his home office, reviewing potential deals and keeping connected with the network of entrepreneurs, investors and others he’s built over the past five decades.

“I’ve done over 50 IPOs,” Pappajohn said in a telephone interview, referring to initial public offerings of stock to take a company public. “Nobody in the country, I believe, has done as many as I have. I still work seven days a week. It’s not work to me — I enjoy what I do, and it’s kind of like relaxation to me. I’ve got a great network of people all over the country, and that really helps me.”

On average, about 10 startup investment pitches cross his desk each month, he said. His longevity and storied reputation in the venture capital world often give him an early first look at potential deals.

“That’s an advantage, because it’s easier to finance if it’s a unique product that’s better than anything else in the marketplace,” he said. “And that’s what I look for. And I don’t have to look hard, because they all find me. … When we find something we’re interested in, we spend time on it, and I also share it with people who invest with me. They’re smart people.”

It’s “pretty hard to find innovation that fits the definition — something that’s fairly unique, that the world needs, which is financeable,” Pappajohn said.

“I tell kids if they want to be successful once they graduate, don’t go into businesses that have no future,” he added. “Go into a business where there is a future, and look for opportunity. Everybody in their lifetime has opportunities, but many times they don’t recognize those opportunities, or they don’t have enough gumption to move ahead and take the risk. I’m a risk-taker, and I’ve done well because I take risks.”

While we were talking on the phone, Pappajohn excused himself briefly to answer another phone. It’s a surgeon from the University of Iowa Hospitals and Clinics whom Pappajohn has worked with for years.

“He’s amazing,” Pappajohn said after quickly wrapping up that call. “He’s a brilliant guy. He and I just financed a new prosthesis for shoulder surgery that’s very unique. The young inventor is down here in Naples. He just invented a better way of doing shoulder surgery so that the rehab is much shorter. That company will probably be sold within one or two years.”

Pappajohn recalled how he made his first million dollars on an early deal in medical technology. After owning the heat-pack technology developed by Kay Laboratories for 16 years, he sold the company to Baxter International.

“Baxter said it was the best acquisition they ever made; that was about 45 years ago. I got stock in exchange and I couldn’t sell it for six months. In that time, the stock doubled and I made my first million.”

Have there been any companies he’s passed on investing in that he wished he had scooped up?

Sure, there have been, he said. “Sometimes something catches you when you’re too busy, absolutely. … I wake up dreaming about some of these.”

Medical technology has been the mainstay of Pappajohn’s investment focus for many years, and health care-related companies remain his sweet spot. Reducing health care costs is the driving force behind many of the innovative companies he sees.

“The first thing is that everybody is trying to come up with a new mouse trap that will help reduce costs — that’s very important,” he said. “So there is all kinds of new technology. I think telepsychiatry is a good example. My doctor here in Naples, who is an M.D. from Harvard, said he has two patients here who don’t have psychiatrists, so he just hired a lady psychiatrist in L.A. who’s treating his patients while driving up and down the freeway in L.A. And she’s getting full reimbursement for it, which is very important in health care. Everybody’s looking for ways to reduce costs.”

A seasoned Iowa serial entrepreneur who has worked with Pappajohn for nearly the past three decades says the venture capitalist is very hands-on and active as an investor.

Mike Vasquez was first introduced to Pappajohn and his company, Equity Dynamics, in 1990. Since then, Pappajohn has financed several startup companies launched by Vasquez. Among the earliest was an AI-based company called Pace Health Management that was acquired by 3M Corp. Pappajohn has also invested in other highly successful Vasquez ventures, including St. Gregory Recovery Centers, Regenexx Inc., and most recently, Opioid Clinical Management.

Pappajohn’s support goes beyond funding to his expertise and network, Vasquez said.

“I think it’s critical because it gives you access to resources that you traditionally wouldn’t see in Des Moines,” he said. “And he is always abreast of technology trends in the market.” Pappajohn actually participated in a sales call with Vasquez for his latest company last year.

“We told him about a sales meeting we were going to have, and he said, ‘Well, I might be able to help you there.’ ” Vasquez recalled. “So he’s a very interactive board member and investor and tries to help the company whenever it’s appropriate.”

Pappajohn clearly has a passion for entrepreneurs and for giving back to Iowa, said Lana Fox, co-owner of ClinicNote LLC, a Des Moines-based company that developed a cloud-based electronic medical record system for speech pathologists.

“It’s really cool to hear the passion he has not only for young people but for giving back to the Iowa economy and trying to be forward-thinking about technology,” Lana Fox said. “And he doesn’t just talk about it — he’s a doer. It’s cool how he loves Iowa and how he loves the entrepreneurial aspects of business, so that people have the tools to make their ideas a reality.”