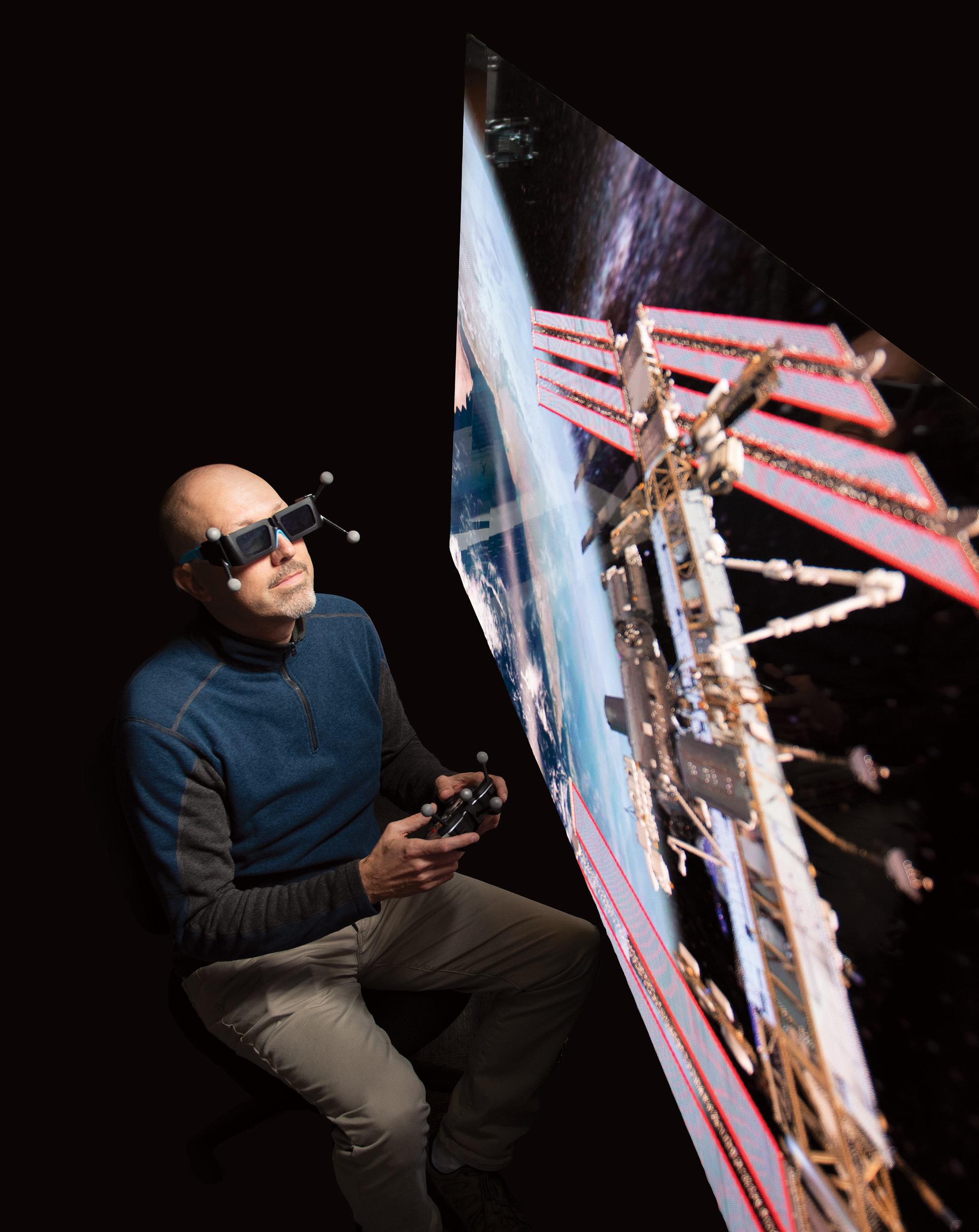 There’s probably a VR app for that

An eastern Iowa company uses virtual reality to show its clients 3D plant layouts to illustrate how its equipment will fit into their factory and improve workflows.

Another Iowa company uses a mobile virtual reality application to guide its customers through interactive troubleshooting sessions with equipment, reducing the need for technicians to make hundreds of service calls for product recalls or easy fixes.

Other Iowa manufacturers are using virtual reality rooms to teach technicians how to more efficiently spray-paint parts, in some cases reducing job completion times by hours.

These are just some of the ways that Iowa manufacturers are adopting virtual reality applications, say leaders of some of the most plugged-in companies in the state that provide and use the latest technologies.

The use of augmented reality and virtual reality (AR/VR) by Iowa companies is more prevalent than most Iowans may realize, says James Gruening, co-founder of Marshalltown-based Mechdyne Corp. The multifaceted technology company has developed software tools for increasingly immersive AR/VR technologies for the past 25 years.

“If you think of any large manufacturer in the state, they’re utilizing this technology in one way or another,” Gruening said. “And I would say a large percentage of them are working with Mechdyne.”

More people than ever have heard about AR/VR technology, and more applications are within the reach of small to medium-sized businesses as the cost of entry continues to drop, he said.

Training applications of AR/VR — both in-house and to educate clients — have become an important resource for Iowa companies, particularly in the manufacturing industry.

“So the ability to take that [training] in-house, whether it’s raining or snowing or whatever the season is outside, and to be able to get that training done repetitively, safely and at a remote location like our industrial dealer locations was a big leverage for us,” he said.

Vermeer began its AR/VR journey about four years ago by looking at some specific potential uses on the manufacturing floor and within the company’s sales and marketing areas, said Allen Callender, the company’s strategic project manager.

“We figured that this technology can be a really good opportunity for us to bridge that gap of visual learners versus hands-on activities that we’re doing out on the shop floor,” Callender said.

“And as we started doing this deep dive into that technology, we’re doing [return on investment] calculations on each one of the applications.”

The company has found that the ROI in using AR/VR on its shop floor is not yet strong enough to support adopting applications there, while the training applications did make sense. “You have to have a really good database structure to support AR/VR visualization,” Callender said. “We’re able to make a really big impact on the training side and have really high levels of ROI in training our customers on how to utilize their machinery in an effective manner.”

Callender said that as AR/VR technology continues to advance, he anticipates more applications will be adopted on the factory floor as well. “It’s about getting that back end [data structure] into a really solid spot so that we can leverage that technology moving forward,” he said. “That’s where we’re really focusing a lot of our efforts.”

Jake Behrens, an industrial specialist with the Center for Industrial Research and Services at Iowa State University, works with companies across the state to assist them in weighing the cost-benefit equation of AR/VR investments. In the current economic environment, he’s seeing more hesitation on the part of small to medium-sized manufacturers.

“It takes some resources to get there, and so that’s something that I think a lot of people don’t have the time to do right now,” he said. “Let me be clear — there are still places where it’s being used. But the things that we’re seeing heavily used are some of your easier-to-implement solutions. For example, maybe there are canned modules or things that are essentially a tool.”

An example of one of those low-hanging apps is TeamViewer, essentially a video-calling application with advanced functionality. A CIRAS client that adopted that was able to save hundreds of thousands of dollars in service costs, just as the pandemic was starting, when they encountered a big technical issue that required replacing the “motherboards” of thousands of pieces of its equipment in use by customers. “With this tool, they didn’t have to send technicians out to each location, so just on that one particular issue they saved themselves hundreds of thousands of dollars,” Behrens said.

Ironically, staffing shortages are keeping many companies from delving deeper into AR/VR, though AR and VR applications can augment staff quite handily, Behrens noted. “So right now, I think it’s a little bit underutilized,” he said of AR/VR applications.

“I would argue in most cases, A, they can afford it, and B, they can’t afford not to, because their competitors are. Everybody talks about the talent war. Just utilizing this technology is not only good for your business; it’s good for your recruiting because it’s a differentiator. They want to go places where the technology and what they’re going to do are interesting.”

For Kerry Smith, co-founder of Davenport-based ChalkBites, one demonstration of the power of virtual reality applications was enough to persuade him to resign as an equity partner in a leading accounting firm in the middle of a pandemic to launch the AR/VR company.

“Steve put me in one of these in the summer of 2019,” Smith said, holding up a pair of virtual reality goggles. “He was pitching me [to become] an angel investor. I had never put a headset on. … When I put it on and I saw how powerful the tool was for learning, training and synchronous collaboration — and how efficiently it could be delivered in terms of costs and without any geographical constraints — I fell in love with it. And so I actually ended up investing as an angel investor in 2019.”

Fast-forward a couple of years, and ChalkBites operates a virtual reality enterprise training center in Davenport, and serves customers across the country. Among their clients is Goodman Manufacturing, a Texas-based company that has operations in Iowa. ChalkBites developed a virtual reality venue for the company’s annual trade show.

“Historically they would hold these events in person and they would fly everyone in for the event,” Smith said. “The vendors would typically have a convention center or trade show environment where each vendor would have a booth. We converted that to be entirely virtual. Instead of a trade show floor, imagine being 12 inches tall inside a giant air conditioner. That’s the [virtual] venue we built.”

For another client, a Quad Cities health system, ChalkBites is creating a virtual training experience for their cardiac catheterization lab. The application will enable medical technicians to “observe” procedures using virtually reality initially. “Today, the training [consists of] the techs observing a procedure, and that’s not always ideal for the patient to have a rookie in there either observing or participating in a procedure,” Smith said. “So we’re creating a training experience for them in virtual reality.”

Smith said he often remarks that the industry is still very much in the early-adopter phase with AR/VR. “The space is still very green,” he said. As an example, Enel Green Power, a global energy company, recently approached him to put together a VR application for them, and it’s not uncommon that a number of large corporations aren’t yet using virtual reality at all.

“It is a disruptive technology, and I’m absolutely convinced it’s going to be ubiquitous,” he said. “This year? No. But sometime in the next 10 years. You know, 15 years ago this [cellphone] just made phone calls. And today it’s everything. The next generation absolutely is going to be spatial.”